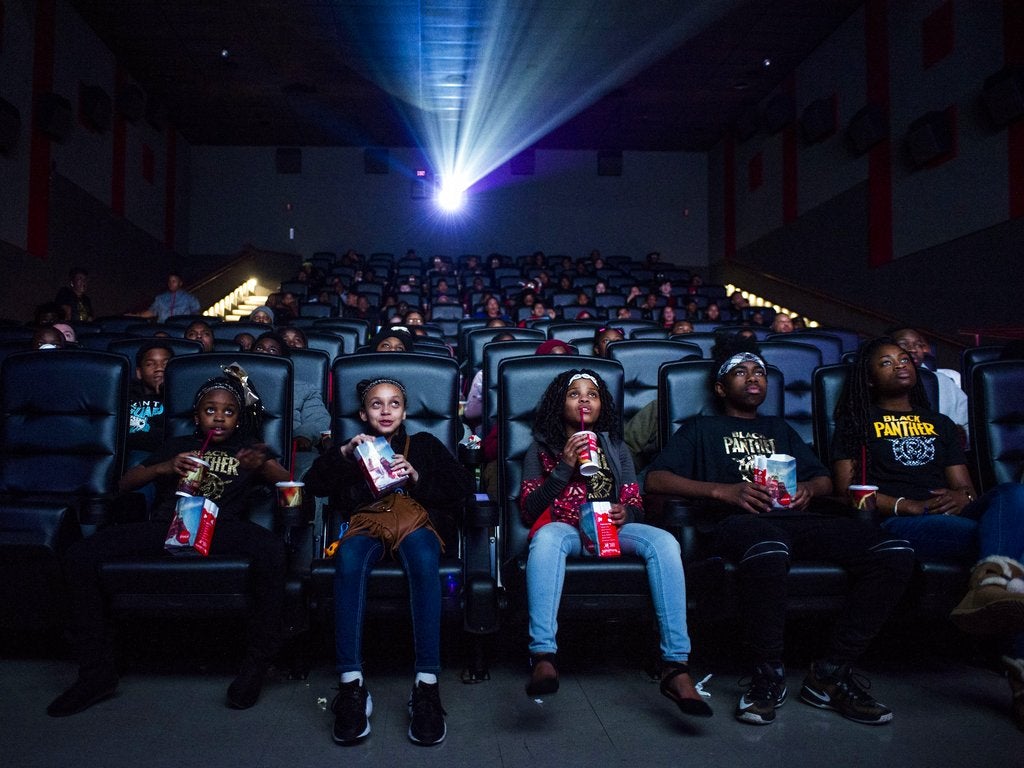 Mari Copeny, third from left, watches a free screening of the film “Black Panther” with more than 150 children, after she raised $16,000 to provide free tickets in an entire theater on Monday, Feb. 19, 2018 in Flint Township, Mich. Image: Jake May /The Flint Journal-MLive.com via AP

ALBUQUERQUE, N.M. (AP) — For years, Zavier Thompson has followed Marvel superhero movies. But the 16-year-old student in Albuquerque has always wanted to see a popular film with a black superhero and black themes.

Thanks to an Albuquerque educator, the aspiring hip-hop and spoken word artist finally got his wish Thursday when he was given tickets to a private screening of “Black Panther.”

“It was amazing. The music, the action…everything,” said Thompson, who is black. “It made me proud to see out culture depicted like that.”

“Black Panther” is about the mythical and highly advanced African nation of Wakanda, where T’Challa, played by Chadwick Boseman, inherits the throne but is challenged by a Wakandan exile named Killmonger, played by Michael B. Jordan. It’s the 18th film in the Marvel Cinematic Universe and based on 50-year-old material created by Stan Lee and Jack Kirby.

The movie set a record with its $235 million debut at the top of the U.S. box office over the holiday weekend, becoming a blockbuster but also a cultural phenomenon. It’s why some educators, philanthropists, celebrities, and business owners are pulling together their resources to bring children of color to see it.

Elementary school students in Detroit, middle school students in Atlanta and students living Los Angeles public housing all have been surprised in recent days with free tickets and transportation to experience a movie that is captivating black communities nationwide. 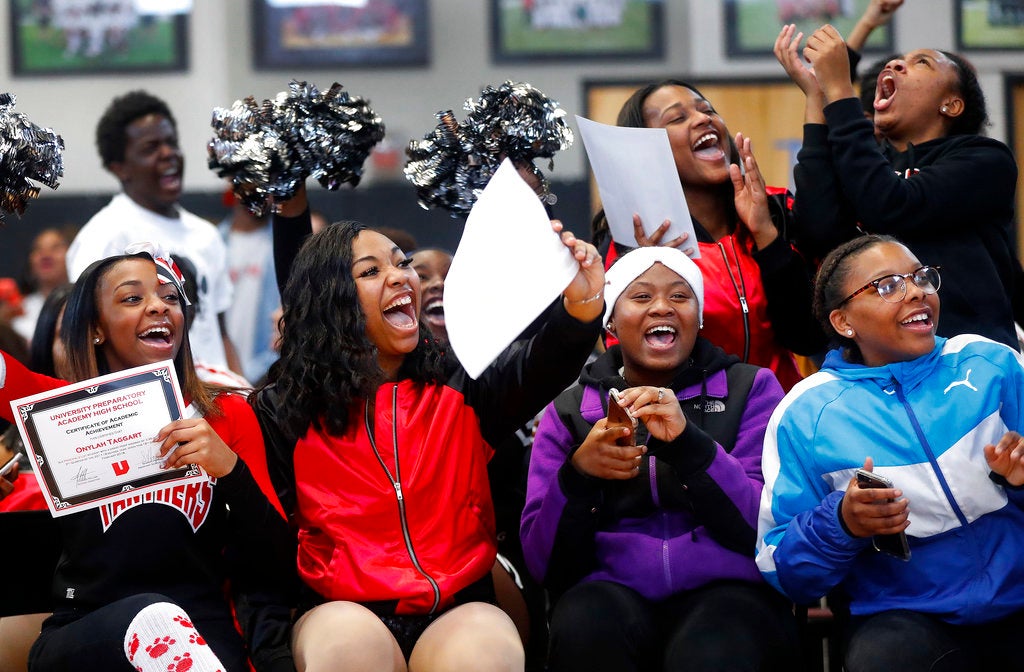 In this Feb. 16, 2018, photo, University Prep Academy High School students react in Detroit to an announcement that all 600 students will see the film “Black Panther.” Image: AP Photo/Paul Sancya

While black leads in TV and film have grown over the years, there is still a lack of positive minority images coming from Hollywood, which is why many are stressing the importance of having young black kids see the movie.

“Something very special is happening here,” said Joycelyn Jackson, director of the Black Student Union for Albuquerque Public Schools, the educator who helped Thompson get into the Albuquerque screening.

“Congrats to the entire #blackpanther team! Because of you, young people will finally see superheroes that look like them on the big screen,” said former first lady Michelle Obama in a tweet Monday. “I loved this movie and I know it will inspire people of all backgrounds to dig deep and find the courage to be heroes of their own stories.”

Congrats to the entire #blackpanther team! Because of you, young people will finally see superheroes that look like them on the big screen. I loved this movie and I know it will inspire people of all backgrounds to dig deep and find the courage to be heroes of their own stories.

The movement began in January after former ESPN “SportsCenter” host Jemele Hill called out prominent Detroiters to help young children in the city get seats to see “Black Panther.”

“I wish I had time to do it myself but if there is anyone in Detroit trying to take kids in underserved communities to see ‘Black Panther,’ holla at me,” the Detroit native wrote on Twitter.

In response to Hill’s tweet, two Twitter groups announced plans to send the entire student body at University Prep Academy High School in Detroit to see it. Twitter’s black employee group known as the Blackbirds and Twitter Detroit took on the costs of tickets and transportation. 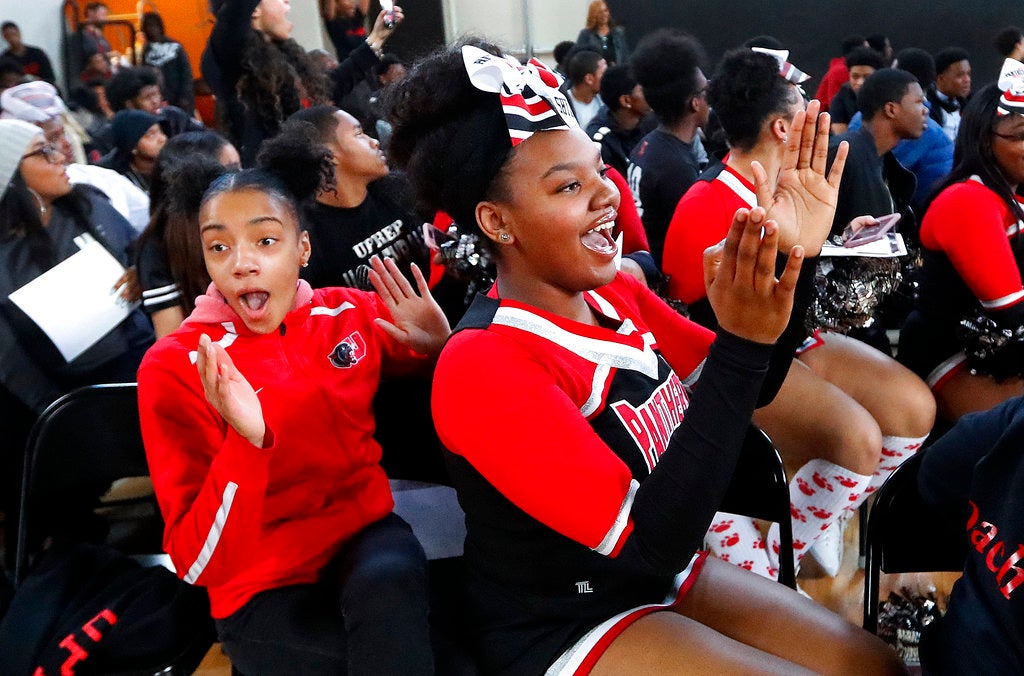 Also, students of the acclaimed Ron Clark Academy in Atlanta were told in a video that went viral they were going to see “Black Panther.” In the footage, the 5th-grade students are shown cheering and dancing upon hearing the news.

Anthony “Top Dawg” Tiffith, CEO of Top Dawg Entertainment, the label of Kendrick Lamar, announced that he would pay for around 1,000 South Central Los Angeles children living in public housing to see the movie (Lamar did the film’s soundtrack). Oscar-winner Octavia Spencer announced plans to host a screening in Mississippi “to ensure all our brown children can see themselves as a superhero.” Over the weekend, Serena Williams surprised girls in the club Black Girls Code with a private screening, which she attended. “Empire” star Jussie Smollett took to Instagram to announce he bought out two screenings in Chicago for elementary students and high school students.

“Black Panther is more than a movie, it’s a movement,” Wade said on Instagram.

In Detroit, a surprise announcement to students was made Friday during an awards presentation in the gym of University Prep Academy High School whose sports teams, consequently, are called “The Panthers.” About 520 students will board buses this week as part of a field trip to a Detroit-area theater, school officials said. NVG