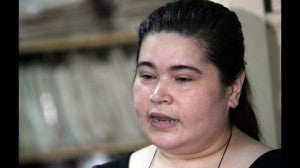 MANILA, Philippines—Genelyn Magsaysay, mother of slain actor Ramgen Bautista, admitted on Wednesday that she has her son’s belongings, including a laptop where an intimate video of Ramgen and his girlfriend Janelle Manahan was purportedly stored, contrary to her earlier claim that his gadgets had been turned over to the authorities for investigation.

In a televised phone-patch interview, Magsaysay said the family had Ramgen’s laptop in their possession, although they could not access its contents because of a password. She turned the tables on Manahan, insinuating that she “might know the password.”

“We have the laptop but it is locked. We do not have access [to it],” she said in Filipino. “What we know is that no one knows Ramgen’s password, [but] Janelle might know [it]. Ramgen was very strict and very private.”

Magsaysay’s admission only bolstered the theory of Manahan’s lawyers that the family might have had a hand in the upload of the video, which went viral at social networking sites.

In a statement, Manahan’s counsel Argee Guevarra pointed out that Magsaysay’s turn-around eliminated other possible suspects who could have leaked the copy of the video online.

“If only members of the Bautista household, including Genelyn [Magsaysay], have access to Ramgen’s laptop, the legal conclusion could only be that she–or any of her children–were responsible for uploading the sex video in social networking sites and in various websites,” he said.

On Tuesday, Magsaysay flatly denied to reporters outside the Parañaque City Prosecutor’s Office about having in the family’s possession Ramgen’s laptop which supposedly contained the video. She said Ramgen’s gadgets had been turned over to police investigators.

Parañaque police chief Senior Superintendent Billy Beltran meanwhile said the investigators only took custody of the mobile phones of Ramgen and Janelle, and these were passed on to digital forensics analysts at Camp Crame.

Guevarra said Manahan disclosed to the legal team the existence of the video which, to her recollection, had been saved in Ramgen’s laptop. Sometime last year, she asked Ramgen to delete the file from the laptop, but she was unsure whether he made copies of the video on memory devices.

Last month, the lawyer recalled that Janelle noticed a cryptic message posted on Magsaysay’s Facebook page, which his client perceived as “a veiled threat.”

The post, which Guevarra said had been taken down when the video made the news, read: “Janelle, wait until the world knows who you really are.”

In addition to this, one of Ramgen’s younger siblings, Ramlyn, purportedly sent messages to Manahan, its contents she described as “belligerent and hostile statements” against her.

“Manahan interpreted this as the Bautista household’s attempt to verbally abuse her, using a minor child, for revealing in her affidavit submitted to the prosecutor’s office about [Magsaysay] being clinically diagnosed as schizophrenic,” Guevarra said.

But Manahan dismissed these as merely made out of foolishness and decided to let the attacks slip, according to the lawyer.

Despite the personal attacks, Manahan remained “steadfast in her commitment to pursue justice for Ramgen and herself,” Guevarra said.