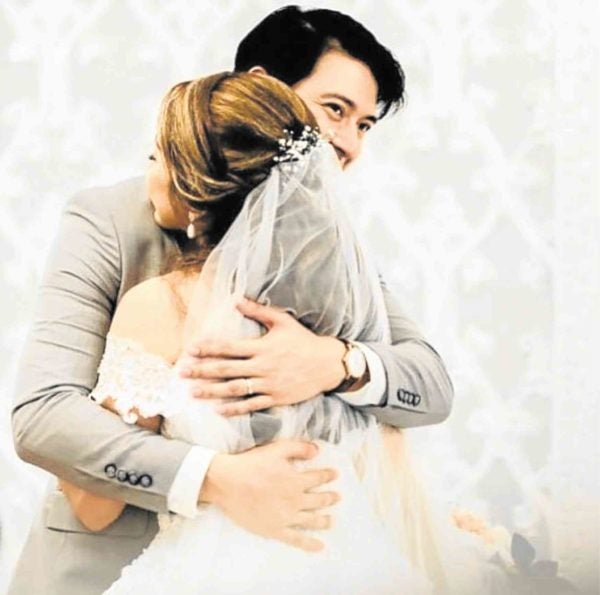 Mike Tan and his bride

Because his longtime, nonshow biz girlfriend is a “very private” person, Mike Tan saw to it that their recent wedding was kept under wraps, inviting only family and close friends to keep the event intimate.

“She didn’t want a lavish wedding. She didn’t want to have a lot of cameras around, so I just honored her wishes,” he told reporters at a recent press conference for GMA 7’s coming afternoon drama series, “Hindi Ko Kayang Iwan Ka” (Feb. 26).

“Only the photographer and cameraman documented the wedding. Some friends and guests did take some shots, but they still haven’t made them public,” added the 31-year-old Kapuso talent, who finally tied the knot with his lover of 12 years (whose identity he withheld) on Jan. 22 at Villa Milagros in his home province of Rizal.

Mike related that he sent out invitations to his show biz colleagues only a week before the wedding, but almost all of them weren’t able to attend, because of such short notice. The only person from the entertainment industry to make it was Mike’s “Starstruck” Season 2 batch mate CJ Muere, who’s now an orthodontist and runs his own clinic.

“CJ and I are really close—he’s one of those friends I treasure,” he said. “I apologized to some of my show biz friends, and I explained to them that it’s just that I had to prioritize family.”

While he didn’t disclose his wife’s name, Mike did let on that she has been his crush since he was 10 years old and met her at a chapel. He didn’t dare try courting her, however, until he started working and making his own money.

“I always had intentions of pursuing her, but I didn’t feel I had the right to do so unless I get myself a job,” said Mike, who described his wife as a “smart” woman with a “wonderful personality.” “Being with her is never boring.”

But their 12-year relationship isn’t always a bed of roses. Having arguments and misunderstandings are but normal for a couple, Mike pointed out.

“I’m not perfect … We’re also the youngest in our families, so we were used to having things our way. Adjustments had to be made,” Mike said. “But we got past all of those things because of our faith—God should always be at the center of the relationship.”

Raising his own family is something Mike has been preparing for the past couple of years. He would like to believe that he’s now ready to take the next step and become a father.

“I wanted to be physically, mentally, spiritually and financially ready for whatever responsibility that goes with being a father,” he said. “We’re not getting any younger, so whatever God gives us, we will happily accept.”