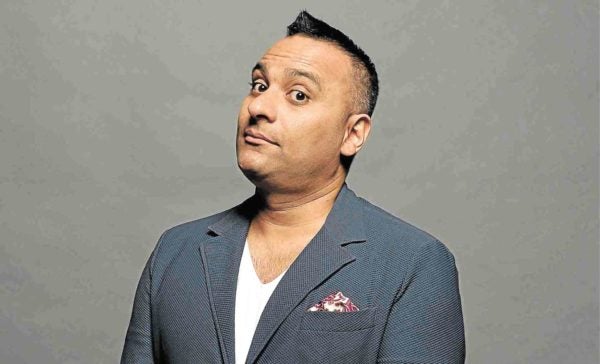 With his irreverent style of observational humor that touches on different racial stereotypes and quirks, Russell Peters has become one of the most popular standup comedians around the world, selling out stadiums in such cities as New York, Sydney, London, Singapore and Toronto.

The 47-year-old performer, who’s known for teasing and engaging the crowd in silly, spontaneous banter during his routines, is also the first comic to have a special on the entertainment streaming service Netflix.

An “equal opportunity offender,” Peters often pokes fun at the quirks of people of different nationalities—and Filipinos are no exception. In his previous routines, the comic had joked about the Filipinos’ English accent, undying love for karaoke, the city traffic, and the sing-song manner with which they greet foreigners.

After his packed show in Manila in 2016, Peters is set to return to the country, this time for his “Deported” world tour, on March 10 at the Philippine International Convention Center Plenary Hall. Mounted by Ovation Production, the gig is expected to feature new material (call 470-2222).

The Filipino culture is a staple in your routine. Did you have Filipinos around you growing up? I grew up with them in the city of Brampton in Ontario, Canada. My best friends were Filipinos, so I got to learn a lot about the culture and the community. I have a Filipino goddaughter (Yes, I’m a ninong!)

I love the Filipino people. And like the Indians, they’re everywhere in the world.

You tackle racial and cultural stereotypes, which can be a touchy subject. How do you make sure you don’t cross the line? I don’t set out to offend. If someone is offended, that has more to do with them and how they’re processing what I’m saying, as opposed to what I’m actually saying.

How does it feel having a diverse audience and seeing them relate to stories that aren’t necessarily theirs? I have been told that what people are responding to in my shows is how similar all the cultures actually are.

Is there a topic that you personally consider off-limits? I don’t change my material according to where I am. Obviously, I like to make local references, as well.

But the one thing that I don’t joke about is religion. People are willing to die for their religion, so … that’s it! Just religion.

A comedian can’t be censored. It’s their job to talk about the world and how they see it. It’s their point of view and, hopefully, it’s funny!

You’re part of a new series on Netflix, “The Indian Detective.” How would you compare doing standup and TV work? Acting isn’t hard. It’s fun, but it’s time-consuming. And when you’re on the set for 14 hours, it starts to feel like real work!

Comedy is my calling and I love it, but I enjoyed making “The Indian Detective” and the movies I’m in that are coming out this year.