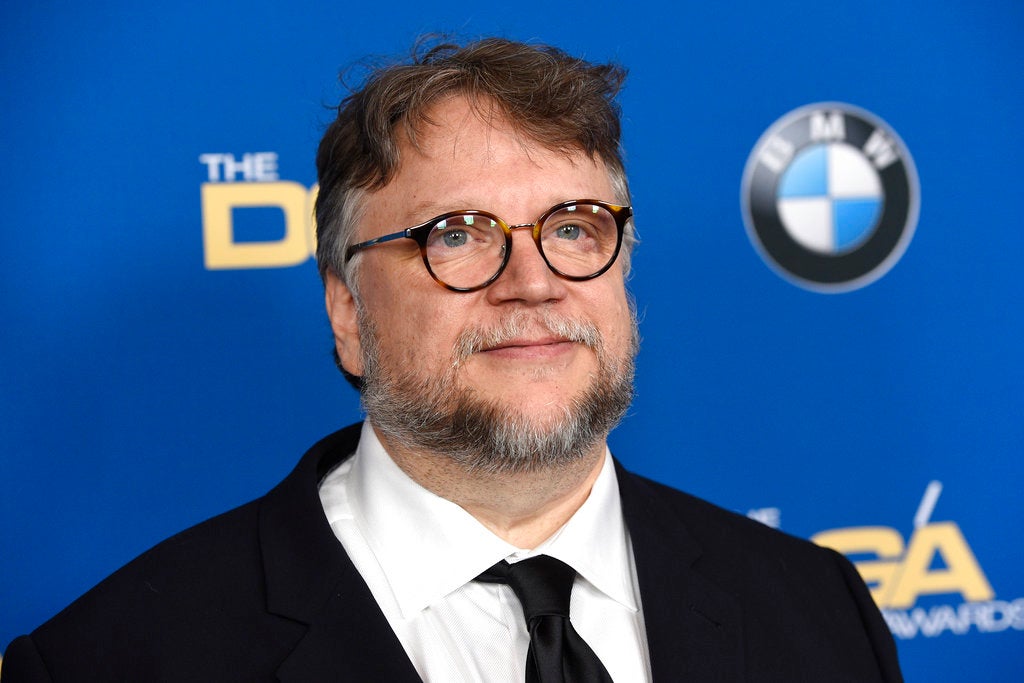 “The Shape of Water,” about a mute woman who falls in love with an underwater creature, has emerged as the awards season front-runner with a Producers Guild Award and a leading 13 Academy Award nominations. 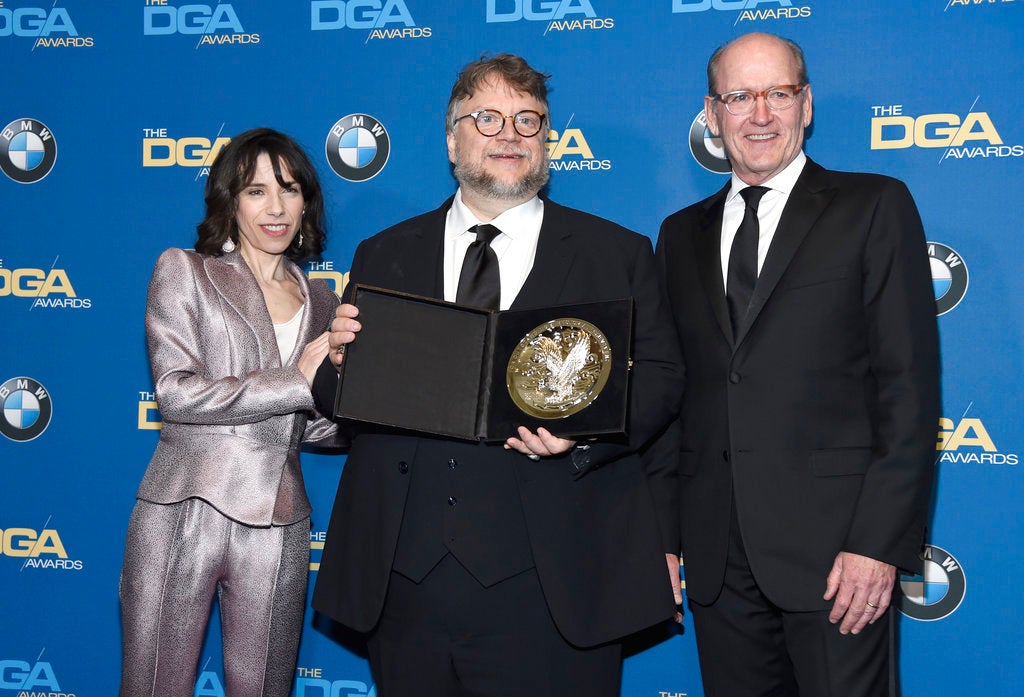 Sally Hawkins, left, and Richard Jenkins, right, pose with Guillermo del Toro and a plaque honoring his nomination for outstanding directorial achievement in a feature film for “The Shape of Water” at the 70th annual Directors Guild of America Awards at The Beverly Hilton hotel on Saturday, Feb. 3, 2018, in Beverly Hills, Calif. (Photo by Chris Pizzello/Invision/AP)

Del Toro said his movie is one that is, “Full of many reasons why it shouldn’t work and they are the reasons that it works.” He dedicated the honor to his mother and father, who has been ill.

He won out over fellow directors Greta Gerwig (“Lady Bird”), Martin McDonagh (“Three Billboards Outside Ebbing, Missouri”), Christopher Nolan (“Dunkirk”) and Jordan Peele (“Get Out”), although Peele did win the prize for first-time feature film for his blockbuster horror film.

Other winners Saturday included Matthew Heineman for the documentary “City of Ghosts,” Jean-Marc Valle for “Big Little Lies,” Reed Morano for “The Handmaid’s Tale” and Glenn Weiss for directing the 89th Academy Awards.

Morano thanked her producers and Hulu for being, “the rare people who were seeking the opportunity to work with women instead of fearing it.”

Representation and the ongoing cultural shift happening in Hollywood and across the country regarding sexual misconduct was at least an undertone of many of the speeches of the evening, as the topics have been throughout awards season.

DGA President Thomas Schlamme kicked off the evening addressing the moment head-on. He stressed a drive toward respectful and inclusive workplaces and said that “we must keep our foot firmly on the pedal and not let up” in their “decades-long fight” to ensure the participation of women and people of color in the director’s chair.

“This is not just a fight by women for women,” Schlamme said. “They didn’t create this problem.”

The DGA, which represents more than 17,000 entertainment industry professionals, sent its members a set of guidelines detailing procedures for handling sexual harassment on Thursday. The guild also joined the Anita Hill-chaired Commission on Sexual Harassment and Advancing Equality in the Workplace.

Heineman, who won for “City of Ghosts,” about a group of citizen journalists who banded together after ISIS took over their land, took his moment on stage to spotlight those in his documentary.

“In the era of fake news where facts seem to be malleable and journalism is under fire, I think it is important to celebrate groups like RBSS (Raqqa Is Being Slaughtered Silently) that are courageously speaking truth to power,” Heineman said.

The Directors Guild also honors directing live-action and scripted programming and even commercials.

Niki Caro, who is directing the live-action “Mulan,” won her first DGA for directing an episode of “Anne with an E” in the children’s programs category. Comedy series directing went to “Veep’s” Beth McCarthy-Miller, who was up against Aziz Ansari in the category. Don Roy King also won a DGA for “Saturday Night Live,” Brian Smith won for MasterChef and Martin de Thurah was recognized for his commercial work.

All directors nominated in the feature category are given “nomination medallions” throughout the ceremony, which includes presentations from their cast or collaborators and speeches before the final award is announced. From Gerwig to Peele, all the nominated directors spoke of their pride of being able to call themselves directors and to be in the guild.

The Directors Guild Awards serve as a reliable predictor of who will eventually win the best director prize at the Academy Awards. Last year, “La La Land” helmer Damien Chazelle won both prizes. This year, all but McDonagh are nominated in the category (Paul Thomas Anderson took the fifth Oscars spot for directing “Phantom Thread”).

Del Toro, like Gerwig, Peele and McDonagh, was a first-time DGA nominee Saturday.

“This means the world to me, this coming from my peers,” del Toro said. NVG

An immersive and unique love story emerges in “Shape of Water”