Perhaps Luis Manzano and Jessy Mendiola’s bashers have too much time on their hands as they have no plans of stopping when it comes to criticizing the two whenever they share pictures together. The couple recently went to Boracay to unwind from their busy schedules, but it seems that even their romantic trip was not to be spared by bashers. 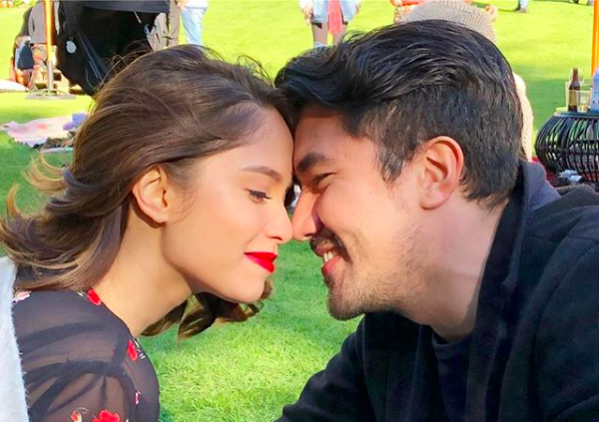 Mendiola uploaded on Instagram a picture of her with Manzano in Boracay on Jan. 23; the two were standing next to each other on the sandy beach and smiling at the camera as their picture was snapped.

In a now deleted comment, one basher (@sheilaprinsesa),  told Mendiola that instead of posting pictures with Manzano and showing off her body, she should just help those in need.

(Miss, I wish instead of posting pictures of yourselves or bodies, you could try helping others. Promise, it feels good to post on Instagram pictures full of love for what you do for others, instead of just asking for attention. Just saying, miss.”) 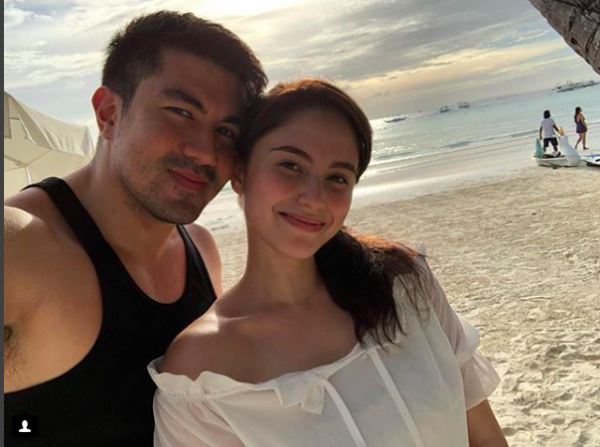 (Why would I post online my acts of charity? Those are private. And what showing off are you saying?)

(You can clearly see that Luis and I are clothed in this post. You focus too much on my posts, you should just unfollow me. Mwah.)

Manzano, on the other hand, seemed like he couldn’t contain himself, as he replied to the basher in a snarky tone. “Te, halatang mukhang mura shabu sa inyo ha (Miss, it looks like shabu is cheap in your area).”

(What’s the point of hiding if you’re just going to say ‘just saying’. Maybe your food everyday is foil and sachet?) 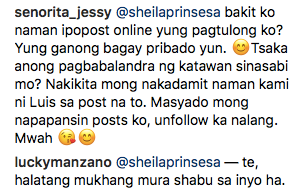 Meanwhile, veteran talent manager and columnist Lolit Solis came to Manzano’s defense four days ago when she posted a picture of the couple from Manzano’s Instagram and offered her support.

(For me, Manzano’s way of responding to comments about him and Jessy Mendiola is cute. It just shows that it doesn’t matter who or what you are, you are still human. It’s not in the ranking of a person, that if you’re a celebrity you can’t respond anymore because you’re a public figure. You should express whatever you’re feeling.) 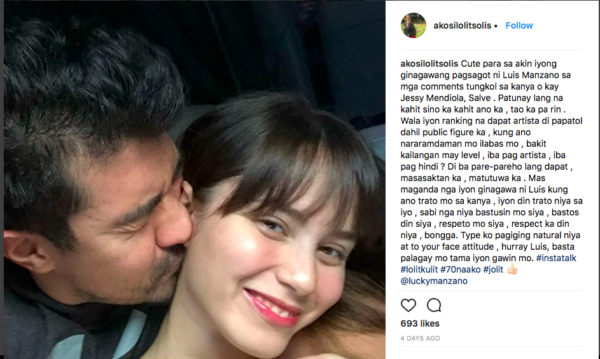 However, bashers still came to Solis’ post and commented about Manzano. One basher (@harvylopez123) wrote, “Nde po yun cute parang yang babae na mapagpatol.. in my honest opinion (It’s not cute, it’s like he’s a girl out to seek revenge, in my honest opinion).”

Another one (@dareenrealbortoff)  also said that womanizers like Manzano are defensive.

The ever vocal Manzano replied to the two, telling them that at least he doesn’t have to hide behind a dummy account because he’s not a coward. “At least di ko kelangan gumawa ng dummy account para i-share opinion ko kase wala kang mapagmalaki sa pagkatao mo.”

(At least I don’t have to create a dummy account to share my opinion because you have nothing good to say about yourself.)

(At least I don’t hide behind an account. Come back when you already have the courage to face me).  /ra

Read Next
Aiko Melendez denies she’s suing ex Jomari Yllana
EDITORS' PICK
Metro Manila posts lowest temperature yet this ‘amihan’ season at 19°C
Acer starts the year off strong with the Aspire Vero National Geographic Edition
Over 3 Million worth of prizes to be won at Smart Padala’s SENDali Manalo Promo!
Gear up and get ready to play with Yamaha Mio Gear
DOH: 28,471 new COVID-19 cases in PH; active cases now 284,458
On Day 2 of implementation, gov’t says workers now exempt from ‘no vax, no ride’ policy
MOST READ
Derek Ramsay on being married to Ellen Adarna: ‘Gumaan ‘yung mundo ko’
Emma Stone calls Andrew Garfield a ‘jerk’ after he ‘lied’ about his ‘Spider-Man: No Way Home’ appearance
Lucky plants to grow in 2022
Retirements prompting major reshuffle in PH military
Follow @CCepedaINQ on Twitter
Don't miss out on the latest news and information.