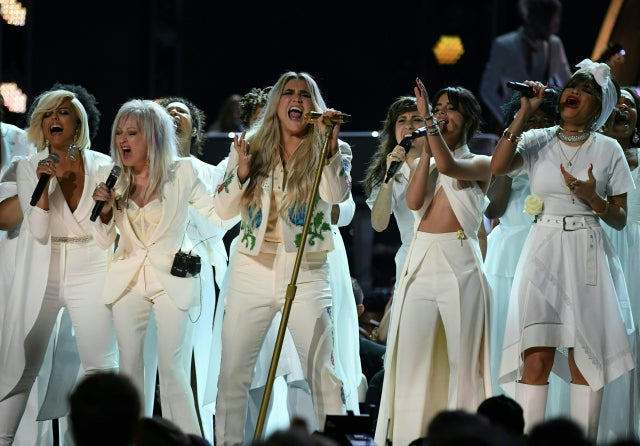 Pop singer Kesha delivered a powerful statement on behalf of women’s equality at the Grammys on Sunday as she led a fierce performance of “Praying,” her own account of abuse, with A-list back-up from a chorus of stars.

Her face intense and her voice building in ferocity, Kesha brought the crowd at Madison Square Garden to its feet and occasionally to tears at a time of growing public consciousness about sexual harassment and misconduct.

“Praying” is an autobiographical song clearly directed at Dr. Luke, the producer whom Kesha accuses of raping and psychologically tormenting her.

Even before the rise of the #MeToo movement in response to revelations about Hollywood mogul Harvey Weinstein, Kesha rattled the industry by demanding the end of her contract to work with Dr. Luke, who has denied the assault charges.

“After everything you’ve done / I can thank you for how strong I have become,” Kesha sings.

Kesha performed at the Grammys surrounded by fellow stars including Cyndi Lauper, Bebe Rexha, Camila Cabello and Andra Day, who offered symbolic and literal support by belting out the song with her. All of the women were dressed in white.

Kesha embraced them in a bear hug as she finished.

“To those who would dare try and silence us, we offer you two words: Time’s Up!” she said, using a slogan for the movement launched on New Year’s Day by hundreds of prominent women in the entertainment industry.

“We say time’s up for pay inequality, discrimination or harassment of any kind, and the abuse of power,” she said.

Support, but no award

Despite the rousing reception, Kesha was passed over for the awards. She was not nominated in major categories and came up short for the two pop prizes for which she was in the running.

Some artists considered the lack of Grammys a snub. Rising young pop singer Daya said that Kesha’s performance left her in tears.

“‘Praying’ is a beautiful song in meaning and delivery and should’ve been a no-brainer” for a Grammy, Daya tweeted.

“Praying” was the lead single off Kesha’s third album “Rainbow,” a lush work with mournful piano and strings, and lyrical explorations about her struggles with self-image.

The sound was a far cry from the light, dance-pop hits that launched Kesha’s career such as “Tik Tok” and “Die Young.”

Before the Grammys, Kesha tweeted that she was nervous to perform, adding: “I needed this song in a very real way.”

“If you need it, I hope this song finds you,” she wrote.

In another sign of support for #MeToo movement, attendees including pop superstar Lady Gaga wore white roses in solidarity with survivors of abuse and in a call for gender equality.

“Time’s up,” Lady Gaga, who has confided her own experience of assault, whispered from her piano bench in between ballads.

The rapper Logic later issued a passionate call for women’s rights at the close of his suicide prevention song, “1-800-273-8255.”

Women, he declared, “are stronger than any man I’ve ever met.”

“And unto them, I say stand tall and crush all predators under the weight of your heart that is full of the love they will never take away from you.” NVG