NBC’s Kelly says Fonda has ‘no business’ lecturing her 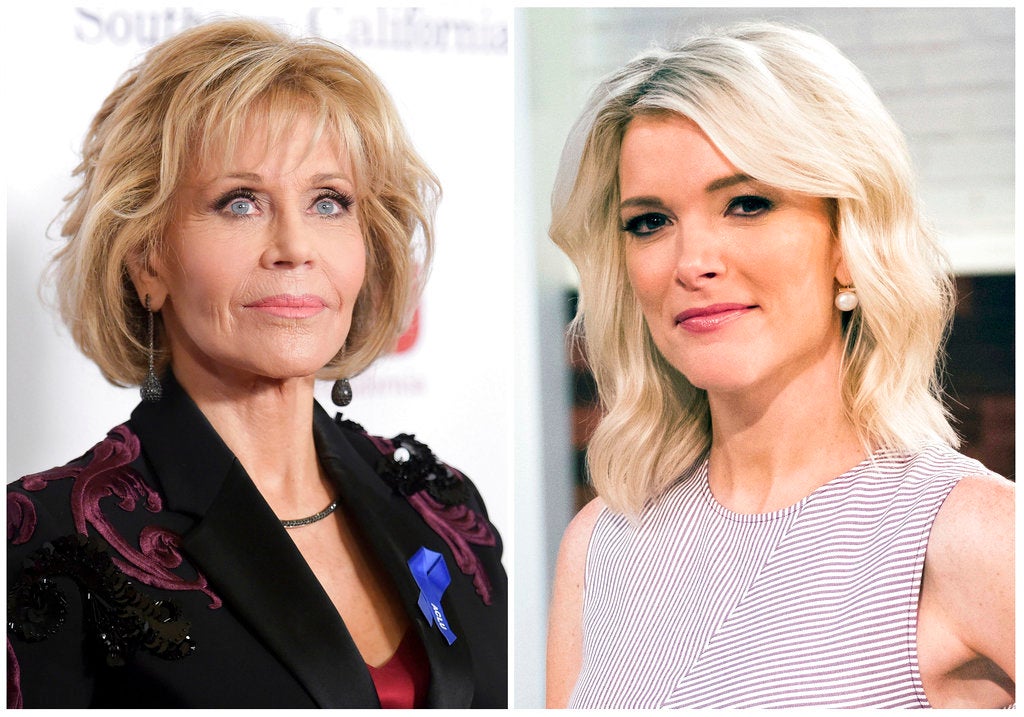 In this combination photo, Jane Fonda appears at the 2017 ACLU SoCal’s Bill of Rights Dinner in Beverly Hills, Calif., on Dec. 3, 2017, left, and Megyn Kelly poses on the set of her new show, “Megyn Kelly Today” in New York on Sept, 21, 2017. Kelly says Jane Fonda “has no business lecturing anyone on what qualifies as offensive” after the actress criticized her for bringing up the subject of plastic surgery in an interview last September. Fonda glared at Kelly and objected to the topic and, in an interview with Variety published over the weekend, called the question inappropriate and said she was stunned it was brought up. Kelly noted Monday, Jan. 22, 2018, that Fonda had discussed the topic of her own surgery in the past (Photos by Richard Shotwell, left, Charles Sykes/Invision/AP)

Fonda had appeared alongside Robert Redford on one of the first “Megyn Kelly Today” installments in September for an interview to promote a new movie. It became tense when the subject of plastic surgery came up; while saying the 80-year-old actress looked “amazing,” Kelly said that “I read that you said you’re not proud to admit you’ve had work done. Why not?”

Fonda glared at Kelly and then said, “We really want to talk about that right now?” She shifted the conversation to the movie.

She’s since criticized Kelly for bringing it up, telling Variety over the weekend that “it was so inappropriate. It shows that she’s not that good an interviewer.”

It was also joked about when Fonda and Lily Tomlin appeared last week on an earlier hour of “Today.” When Hoda Kotb asked the women how long they had been friends, Tomlin joked, “I think before your first facelift.”
“Who are you, Megyn Kelly?” Fonda said.

It was all too much for Kelly, who said that it’s time to address the “poor me routine.” She noted that Fonda has discussed her surgery on several media outlets prior to coming on her show and has talked about giving a cultural face to older women. If that’s the case, “then her plastic surgery is tough to ignore,” Kelly said.

“I gave her the chance to empower other women, young and old, on a subject which she purports to know well and she rejected it,” she said. “That’s OK. But I have no regrets about the question. Nor am I in the market for a lesson from Jane Fonda on what is and is not appropriate. After all, this is a woman whose name is synonymous with outrage.”

She noted that many veterans still call her “Hanoi Jane” because of her 1972 trip to North Vietnam. Fonda has apologized for being photographed with anti-aircraft guns but not for the trip itself, where she criticized U.S. war policy in the capital of the country that the U.S. was fighting.

“The moral indignation is a little much,” Kelly said, adding Fonda “has no business lecturing anyone on what qualifies as offensive.”

Fonda had no comment on Monday, a spokeswoman said. MKH