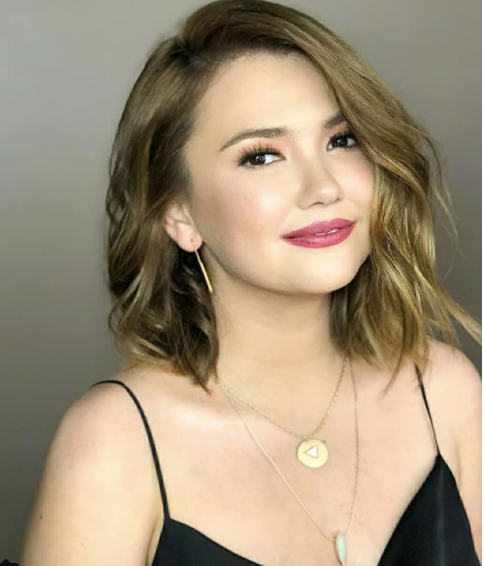 “Hugot queen” Angelica Panganiban yet again made a steaming revelation over a recent incident that happened to her that concerns an ex-boyfriend whom she did not name.

‪“Ang Dalawang Mrs. Reyes” co-star Judy Ann Santos, Panganiban drew out interest from the audience as she revealed an unusual instance that again left her a not-so-worth remembering memory of her ex.

The revelation happened through a game called “Music Love Guru” challenge where each of them would ask one another a question then answered by a random song played in shuffle.

The song didn’t quite much agree to Panganiban when she said she’s over him when it played the chorus of “Only reminds me of you” by MYMP.

“I’ll try to run from your side but each place I hide only reminds me of you…” The particular line of the song then struck a recent memory to the actress.

And when she was settling the bill, the waiter gave her some unsettled balances. But she first explained why she had credit in the said restaurant.

As she went on to check further, she was just appalled to learn that the so-called unpaid bill was too blown up.

She then called foul and stood that she’ll only pay for what she consumed.

Her story yet again gave a laugh-out to the audience watching live. She did not particularly drop name of her former boyfriend but taking from her life’s events, her most recent relationship was controversial actor John Lloyd Cruz who is now reportedly in a relationship with sexy actress Ellen Adarna.

No confirmation however, has been made yet by the two.

Why Ellen Adarna might be keeping mum on pregnancy