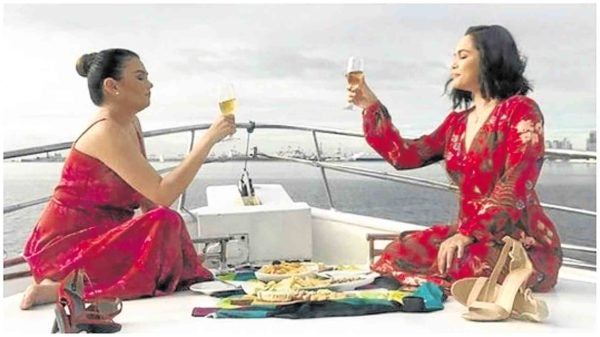 Comedy is more effective when it manages to mine simple truths alongside life’s ironies and contradictions. But it quickly loses its appeal when it veers too far away from reality.

Like “Grace and Frankie,” the acclaimed Netflix series it channels, the movie is boosted by its lead actresses’ versatility, potent screen presence and acting stamina—you can’t take your eyes off them.

The film finds beleaguered protagonists Lianne Reyes (Judy Ann) and Cindy Reyes (Angelica) forging an “unholy” alliance when their heretofore “distant” husbands, Gary (Joross Gamboa) and Felix (JC de Vera), come out of the closet and pledge their undying love for each other.

But, the scandalous news that the newly emancipated lovers intend to formalize their union and tie the knot in Taipei is too much for the two Mrs. Reyeses to take. (It should be noted that Taiwan’s highest court considers sexual orientation as “an immutable characteristic that is resistant to change.”)

Felix and Gary’s belated realization that they’re better off with same-sex partners puts Lianne and Cindy through the emotional wringer—and on the defensive. As William Congreve pithily stated in “The Mourning Bride”: Heaven has no rage like love to hatred turned/ Nor hell a fury like a woman scorned.

As it pokes playful fun at Lianne and Cindy’s misadventures to stop their husband’s impending marriage, the film encourages viewers to embrace diversity by cleverly introducing gender “variants” that unapologetically hopscotch through the widening and ever-evolving spectrum of identities in the LGBTQ community. For instance, Gary is a male-to-female transsexual, while Felix identifies himself as a “hetero-flexible” male.

Its gender-bending story aside, it’s such a tantalizing treat to see Judy Ann and Angelica making thespic sparks fly as they navigate their characters’ respective journeys with confidence and conviction.

We’ve always known Angelica to be a comedic whiz with impeccable timing. But, the 31-year-old actress—the finest of her generation (along with Bea Alonzo)—is just as credible at tugging viewers’ heartstrings. It’s this element of unpredictability that makes Angelica consistently viewable as a performer in whatever role she chooses to essay.

For her part, Judy Ann’s decision to act with her talented costar in a comedy is a brave and bold decision that evinces growth and maturity—because making people laugh is a special skill that requires an idiosyncratic combination of innate talent and time-honed experience. But, the former’s spot-on characterization and lived-in earnestness manage to see her through the production’s complicated comedic moments.

What about JC and Joross? Well, they both look good and have proven in past starrers that they’re competent at portraying gay characters (“Best.Partee.Ever,” “Deadma Walking”). But, for the most part, they portray deus ex machina characters who play second fiddle to their more fascinating female counterparts.

While the movie benefits from its feisty and crowd-pleasing froth, it fails to fully satisfy because it hardly gets under its aggrieved characters’ skin as it accommodates the production’s feel-good, happily-ever-after denouement.

True, the world is inhabited by people from all walks of life and with different romantic persuasions, so whatever route the storytelling takes should still be rooted in reality, not in staged and manipulated fantasy.

Your subscription could not be saved. Please try again.
Your subscription has been successful.
Read Next
Why it’s easier for Rhian to be in a relationship with a nonshow biz bf
EDITORS' PICK
Philippine-United States alliance ‘rock solid’ — DFA
House energy committee chair Arroyo bats for cheap electricity
Omega Speedmaster super racing: Tiny device massive change
Makabayan bloc blasts bid to expand US access to more military bases in PH
vivo Philippines offers a free bouquet of flowers and a premium necklace perfect for Valentine’s Day
Fuel price rollback expected on Feb 7
MOST READ
Vice Ganda gets called out for ‘unfair treatment’ of ‘It’s Showtime’ co-host Karylle
Kris Aquino gets ‘renewed confidence’ after consultation with new doctor: ‘I have a strong chance of getting better’
Fuel price rollback expected on Feb 7
CIDG raids Pogo firm in Tarlac; rounds up 850 foreign, Filipino employees
Don't miss out on the latest news and information.