Famed filmmaker-director Antoinette Jadaone tweeted on Saturday, Jan.13 about the cancellation of her shoot, igniting speculation that she may be talking about her latest film “Never Not Love You” with love team James Reid and Nadine Lustre.

Two days later, the filmmaker followed her cryptic tweet with a post in her personal blog, ilayailaya.wordpress.com.

In a post entitled “anti-climactic”, Jadaone wrote that filming for #foolishmovie is “becoming erratic.” “Sayang, andun na ang momentum eh. More and more shooting days cancelled, some reasons more heartbreaking than others, so heartbreaking they make me cry.”

Jadaone further wrote that perhaps she should just channel her energies towards another project to make her heart flutter again. 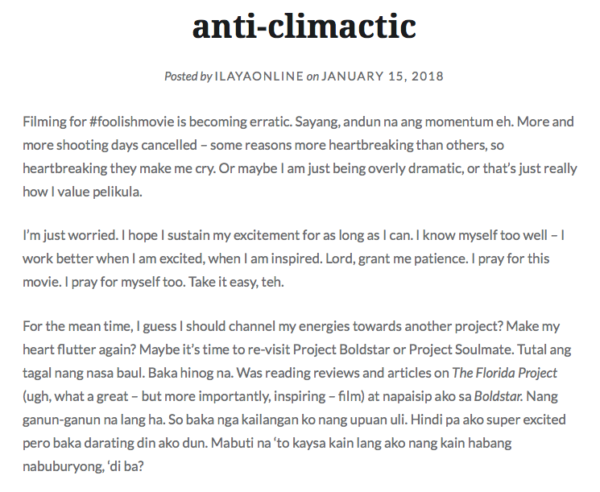 In Jan. 16, days after Jadaone’s tweet, Nadine Lustre shared in her Instagram Stories x-rays of her spinal column. Lustre wrote, “Diarrhea, Fever, severe Back pain since last Friday. That’s all you need to know.” 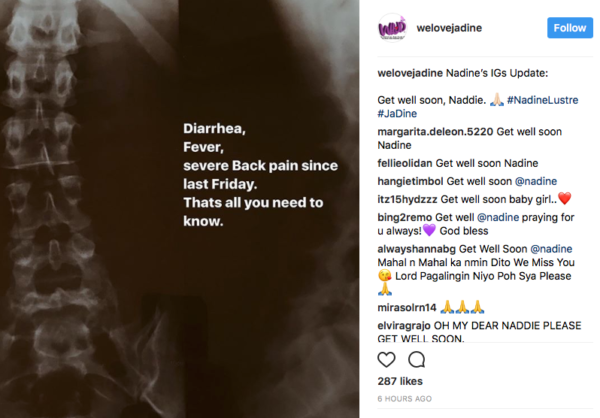 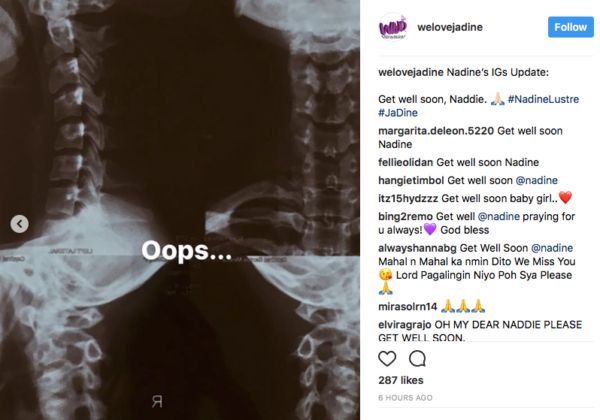 Based on the images, the star allegedly had to be brought to St. Luke’s Medical Center due to back pains. However, reports from Philippine Entertainment Portal cite other possible reasons for filming delay.

As per report, quoted and screenshot texts revealed that the shoot was canceled because Reid allegedly went out partying the night before the Saturday shoot. Apparently, Reid had too much to drink and was too hungover to show up. The Saturday and Sunday shoots were thus canceled.

Back in November 2017, it was reported that Jadaone and JaDine would be reunited once again for a new film called “Never Not Love You”. Fans were thrilled when Jadaone uploaded a photo of Reid and Lustre’s forearms tattooed with “ikaw at ako” and “you and me.”

Earlier this year, Jadaone even took to her Instagram page to share a photo of Reid and Lustre on the set of “Never Not Love You”. Cody Cepeda/JB

New JaDine movie in the works