Loving partnership behind ‘Remember Me,’ ‘Let It Go’ 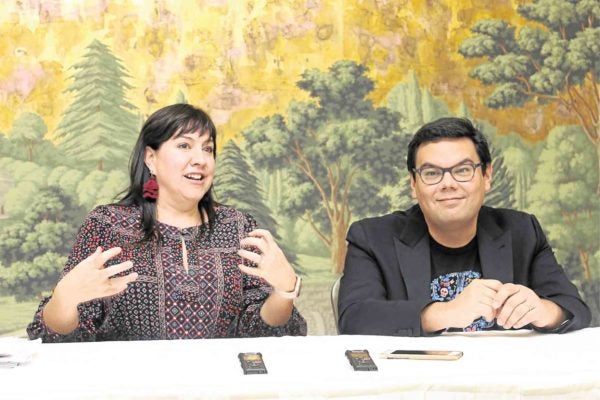 LOS ANGELES—“I love Kristen more and more every day. She is my best friend. To get to spend as much time together, which is pretty much every day, I am the luckiest guy in the world,” Fil-Am Robert “Bobby” Lopez gushed about his personal and professional collaboration with his wife, Kristen Anderson-Lopez, which has produced songs like “Remember Me” and “Let It Go.”

“I can’t top that,” Kristen quipped about her husband’s outburst of affection. Married since 2003, Bobby and Kristen composed the songs for the Pixar films “Coco” and “Frozen,” the stage musical “Up Here” and the Walt Disney World production of “Finding Nemo—The Musical.”

Their “Let It Go” (from “Frozen”) won them an Oscar for best song and two Grammy Awards. “Remember Me,” their moving ballad from “Coco,” was nominated for best song in the recent Golden Globes.

“Our happiest moments are in our apartment, in our office, when a germ of an idea turns into a melody, a verse or a chorus,” shared Kristen, who lives with Bobby and their two daughters in New York. “We start getting that feeling of ‘yes!’ And you start running with that. That to me is where we are truly in sync with who we are.”

Kristen admitted to us in a previous interview that when she first saw Bobby in a musical-theater workshop in 1998, she thought right away that he’d be the man she would marry.

“We have a marriage like anyone else’s,” said Bobby, who is the youngest member of the elite group of only 12 people who have won an Emmy, a Grammy, an Oscar and a Tony Award (Egot) and the quickest (in 10 years) to win all four, according to Wiki.

His Tony trophies are for “Avenue Q” and “The Book of Mormon.” “It goes through ups and downs. But the secret to a good marriage is when you have a crisis—you turn it into an opportunity to get closer and understand each other more.”

“I love a crowd, performing, connecting with an audience,” said Kristen, whose own credits include the musical, “In Transit.” “I love it when something that we worked hard on connects.”

They added songs to the stage musical version of “Frozen,” which begins previews on Broadway next month and will likely connect with audiences. In addition, they are writing songs for the “Frozen 2” movie sequel.

Kristen cracked that composing for all these projects is easier than coping with the demands of their increasing fame.

“In terms of the trappings of like staying really skinny and wearing the $8,000 gowns, that’s harder,” she said with a laugh. But she looked effortlessly elegant in a black gown on the Golden Globe red carpet with Bobby, dapper in an Oliver Tolentino piña fabric tux.

“It takes work and it takes hours that I don’t necessarily have, because I’m a mother of two. I love the content and creation part,” Kristen added.

On “Frozen” opening soon on Broadway, Kristen said, “We are intimately involved in the rehearsal process and the recording of the cast album. Then the previews, which are the hardest because with previews, you don’t know the show you have until you sit with an audience. You listen very carefully and feel the energy.

“Then, when you feel something drifting that night, everybody comes together and says, ‘We need to change that, we need to fix that.’ Sometimes, we have to write a new song, a new verse or a new intro that night. We wake up the next day and rehearse it with the cast, the tech and the set, then see it again the next night. It’s like being in finals for a month, every single day.”

Bobby added, “The thing that we always say is, ‘Frozen’ the movie has seven and a half songs. A Broadway musical needs to be two and a half hours that is mostly song-driven. So, at first in 2014, when they gave us this challenge, we were very daunted. It was like standing at the bottom of a hill going, oh my God, how do we get up there?”

“Coco” being a film about a boy meeting some of his dearly departed family members, Bobby and Kristen were asked who they’d love to meet.

“I am part Filipino—my father’s Filipino,” Bobby answered. “I never met my grandfather. He was Filipino. I have a picture of him. He looked so charismatic and cool that I wish I got to know him.”

“He was hot, too, I have to say,” Kristen interjected.

“He was a good-looking guy,” Bobby agreed.

“We have his picture, and I went, hmm,” Kristen said with a smile.

“Yeah, maybe Kristen can meet him,” Bobby quipped with a grin.

Kristen would have loved to meet her “Swedish grandmother, who came as a single mother to this country. She had to raise two boys. She owned a bakery and yet, she still was able to learn the violin and became very musical.”

And how would Bobby and Kristen like to be remembered by their grandchildren?

Kristen replied, “The most important thing we try to hold on to, and I say this to my girls every day, is like, ‘Go out there. Be your best selves so you can make the world a better place.’ I hope that they take that lesson and pass it forward. Then, our legacy is that we worked every day to put good into the world.”