‘The Good Doctor’ a suitable vehicle for its talented lead actor 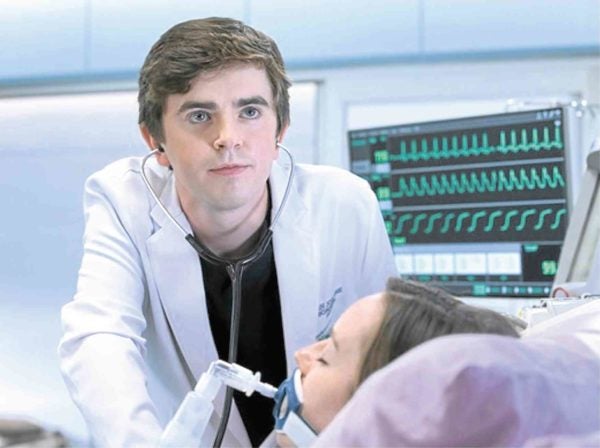 The former child actor scores with his portrayal of the sometimes-uncommunicative but brilliant young man, helping bring to light issues faced by people with the developmental disorder. The show, airing on Fox Life, is being developed by “House’s” David Shore, and is a remake of a South Korean series.

It’s a medical procedural, but with an autistic Doogie Howser lead: Highmore’s character Shaun Murphy, despite his inability to detect sarcasm and his failure to exhibit perceived “regular” behavior, is also a genius who studied to become a surgeon in his teens, after being liberated from an abusive father and raised by the kind Dr. Glassman (Richard Schiff), who’s now his boss and staunchest defender.

Highmore’s portrayal of someone “different” manages to make the promising Dr. Murphy sympathetic, vulnerable and detached all at once. His expressions are seemingly limited, at first—but when he accesses the character’s traumas and past victories, he displays an emotional range that sweeps hapless viewers into his thespic vortex.

Just as commanding is the actor who plays the younger Shaun Murphy, teenager Graham Verchere, in integral flashbacks. He only has a faint resemblance to Highmore, but his consistent acting, from a variety of fidgety expressions to meaningful verbal disclosures, gives them that tight connection.

But, his colleagues in the hospital become interesting only when they’re directly enmeshed in the young physician’s unfolding story.

When Shaun’s condescending superior, Dr. Melendez (Nicholas Gonzalez), shows territoriality in the operating room, Shaun’s wide-eyed, innocent response is, “You’re very arrogant. Do you think that helps you be a good surgeon?”

Some scenes in the first episode easily stand out: Shaun being redeemed for his no-show at a crucial deliberation, for one. Then, there’s the succinct, tearful speech about losing his pet rabbit and younger brother years ago that cemented his hiring: “I couldn’t save them. It’s sad. Neither one had the chance to become an adult…And I want to make that possible for other people—and I want to make a lot of money, so that I can have a television.”

All that pain and the subsequent humor, convincingly contained and conveyed, are indicative of good writing. It’s also aided by illustrative computer graphics, in the vein of “CSI” and “Limitless,” adding a touch of artistry to the labyrinthine medical language, and helping make “The Good Doctor” easier to watch.