Mary J. Blige gets star on Hollywood Walk of Fame 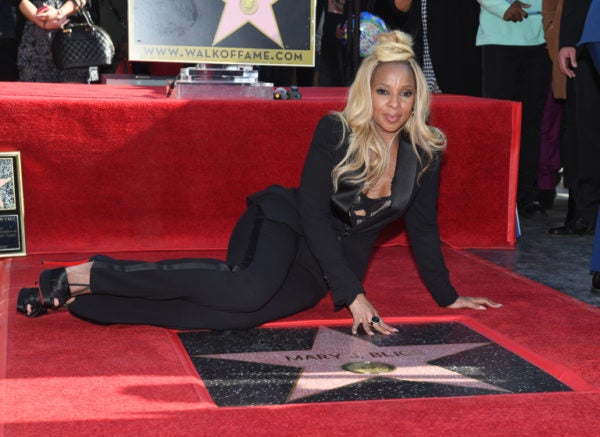 Grammy-winning soul singer Mary J. Blige — who has earned critical acclaim and award nominations for her acting debut in last year’s “Mudbound” — celebrated her 47th birthday Thursday by getting a star on the Hollywood Walk of Fame.

“I am so grateful, and I say that with confidence and not arrogance,” she told the crowd gathered for the star unveiling ceremony. “I know my work and I understand what this means.”

Blige — the self-proclaimed “queen of hip-hop soul” who is best known for hits such as “No More Drama” and “Reminisce”— is a nine-time Grammy winner with tens of millions of records sold worldwide.

She earned a Golden Globe nomination and a Screen Actors Guild award nod — and is generating Oscars buzz — for her magnetic turn as Florence Jackson, a stoic housewife in Dee Rees’s civil rights drama “Mudbound”.

“Dee Rees called me and gave me a job and put my life back in motion with ‘Mudbound,'” Blige said.

“Dee, I want to thank you for calling me. I don’t think you understand what you did… You really really helped save my life,” the New York native added. “‘Mudbound’ opened up doors and gave me strength that I didn’t even know I had.”

Rap mogul Sean “Diddy” Combs, who helped launch Blige’s career and produced most of her first album, was on hand to congratulate her.

“We would just dream — we were saying… ‘We want to be somebody, we want to be big,'” Combs said. “And we did that. Singing.”

Blige gushed about Combs, saying he helped keep her going in the hard times.

“I love this man so much,” she told the crowd. JB