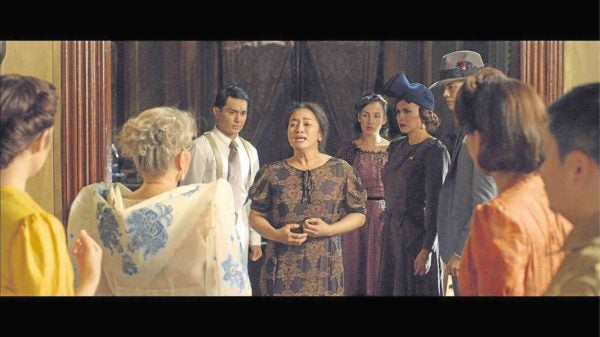 Joanna Ampil (center) in a scene from “Ang Larawan”

NEW YORK—Thanks to a reviewer’s screener provided by producer Girlie Rodis, Rob and I got to sit in our living room to watch Loy Arcenas’ “Ang Larawan,” currently an entry in the 2017 Metro Manila Film Festival.

At the festival’s Gabi ng Parangal, the movie danced away with numerous awards: Best picture, best actress (Joanna Ampil), best musical score (Ryan Cayabyab), best production design (Gino Gonzales), Gatpuno Villegas Cultural Award and a Special Jury Award for the late Nick Joaquin, on whose play, “Portrait of the Artist as a Filipino,” the film was based. The musical’s libretto is by another National Artist, Rolando Tinio.

Set in the days just before World War II broke out, the story begins at the once-glorious home of the younger Marasigan sisters Candida and Paula (Joanna Ampil and Rachel Alejandro, respectively) tasked with the care of their ailing and reclusive father, painter Don Lorenzo Marasigan (Leo Rialp) and the upkeep of their house. Deep in debt, they try to stay one step ahead of every bill collector.

Their only visitor in ages, Bitoy Camacho (Sandino Martin), pays them a visit with the intent of taking a photo of the now-legendary portrait painted by Don Lorenzo for his two spinster daughters, a portrait of Aeneas carrying his father Anchises on his back as they run from the burning city of Troy, placing himself in the images of both the father and son.

As the movie continues, more visitors come to the Marasigan residence, each of them seeing the painting in a different way. One sees it as inspiration for an evening gown to wear while dancing. Another sees it as a testament to artistry that didn’t die in old age.

The two elder Marasigan siblings (Manolo, played by Nonie Buencamino, and Pepang, played by Menchu Lauchengco-Yulo) want to sell the house, with Pepang taking Paula and Manolo housing Candida. But the two sisters have other ideas, with one of them being the taking-in of a boarder, Tony Javier (Paulo Avelino), who later on seduces Paula.

Tony proposes to the sisters to sell the painting, having fetched the price of $10,000 (or P20,000) from an American client, but before the painting could be sold, Paula decides to destroy it, lifting whatever ghostly hold it has on her and her sister.

It is only after the portrait’s destruction and a party held at the house to celebrate the Feast of La Naval that Don Lorenzo decides to leave the confines of his bedroom.

Feast for the eyes

“Ang Larawan” is a feast for the eyes, thanks to the production design, costumes and a great film colorist, as well as for the ears, thanks to Ryan Cayabyab’s sumptuous songs and score, brought to life by the ABS-CBN Philharmonic Orchestra.

Very often, I found myself pointing at the TV with a huge smile on my face because of some familiar and beloved actors.

All that said, however, the film belongs to its core cast. Sandino is utterly charming as the film’s narrator (his older counterpart’s voice-over narration provided by Leo Martinez), an affable, sweet-faced presence with a voice to match.

Nonie and Menchu are ever-reliable, and allow me please to give her a standing ovation for being able to hold her own in a role requiring her to speak nothing but Filipino and some Spanish. Tee hee!

Paulo as Tony may not be the best singer (especially in this cast of stellar vocalists), but clearly, he was cast for his skills as a storyteller and actor, and his performance was one of my standouts, due to the mountain of layers he employed in that role, which made him riveting to watch.

As the two sisters, though, Joanna and Rachel have the biggest burdens, both vocally and emotionally.

Joanna as Candida has the showier role of the two, with arguably more mental and emotional breakdowns than she probably ever had playing Kim in “Miss Saigon.” However, she was in full control of her plentiful gifts, at times girded, at others unhinged, thus there was no surprise that she would win the best actress award.

Rachel has turned in what I shall consider the most beautiful, subtle and skillful performance she has ever turned in. I’ve seen her over the years in musicals and in concerts, and this is without a doubt the best thing I’ve watched her do.

Kudos to director Loy Arcenas for teasing the best of out of these two ladies, as well as the entire cast. He and his company have created a masterpiece that will outlive us all.

I’ve likened this film to “the little engine that could,” because of a slow start on the festival’s opening day. Screens were lost due to low attendance, with more moviegoers opting for the more family-friendly, popular fare.

However, because of the awards it has now reaped, and perhaps due to its loyal fans crying out on social media (myself included), “Ang Larawan” will hopefully find itself more interesting to audiences. This isn’t junk food; this is a full and sumptuous offering that will not just fill our bellies, but enrich our souls.

Congratulations to everyone that was a part of and a force behind “Ang Larawan.”

Contra mundum, ladies and gentlemen. You have defied the world by making this movie, and the world will all be the better for it.