Sex, drugs and disease: Even celebs ‘party and play’ 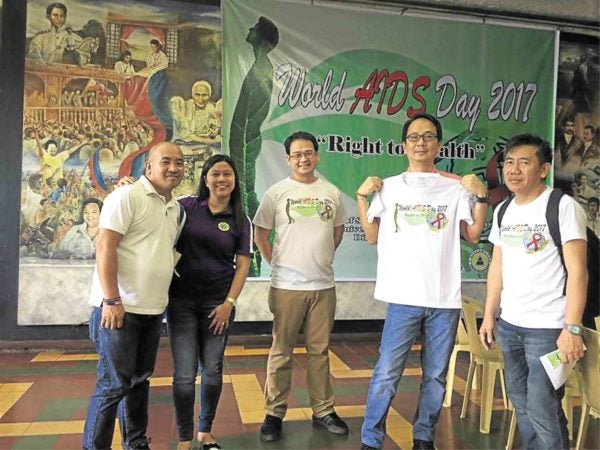 Jhun Oliveros, peer educator and advocacy officer of the AIDS Society of the Philippines (left), and Dr. Rolly Cruz, HIV coordinator of the Quezon City health office (4th from left), with other HIV advocates

“What I know is that celebrities schedule their own (Party and Play, or PnP) sessions with people they trust; they are never the frontlines, because that’s too risky,” a source said. “Ibang tao ang pinapaharap nila, then dun na sa party mismo malalaman na may celeb (participant).”

Nico has been to a few PnPs, but encountered a celeb only once. He said in some PnPs, the prospective participants have some hints of the other guys who would also be participating, since photos provided by those who send feelers circulate during chats.

Both Kenjo and Nico consider having a celebrity participant “a plus,” that was why the former took photos of his first PnP experience.

Five naked, unconscious young men sprawled in different positions on two couches and on a carpet were captured in a series of photos on Kenjo’s mobile phone. He was the first to wake up the morning after that all-night party, so he took pictures before heading home.

He said one of the naked men was a celebrity, hence, the photos were on his phone for “a few-minute-keepsake” that he promised to delete.

“I’m not gonna show them or post them somewhere,” Kenjo said. “We have a sworn oath not to do that. Guys who violate this oath are cut off.”

At the venue, participants gauge each other not just to see whom they like, but to determine if the group is secure. “We can’t avoid appraising each other to sense if the activity is a setup or maybe, one of us is a ratter,” Migo said. “Secrecy is crucial. Once you’re in, you’re bound by the unwritten rules.”

Kenjo said he continued to enjoy “extreme and bizarre sex” in these parties.

Migo said more partiers were getting creative, but he recognized the danger of drug use and unprotected sex, even if he indulged in it.

“There were parties where some guys negotiated for condom use, but they were overruled,” he said.

He also recalled one instance when they rushed a guy to the hospital for overdose.

The altering effect of PnP was reflected in the responses of the 20 interviewees in Agbulos’ thesis who thought drugs were dangerous and unlawful, but changed their views after they joined parties, saying “there is nothing wrong if drugs are used recreationally or as a means to escape.”

Their first try, which they noted with “euphoric, pleasurable feelings,” was out of curiosity and was voluntary, not peer pressure.

One of Agbulos’ interviewees, a 31-year-old male who has been a drug user and partier for four years, said: “The first time I got high, it felt like, ‘Oh wow!’ It’s five times better than what you usually feel during normal sex. I can’t forget the first time I took the chem. After that one, I got addicted because of the great sex.”

This 31-year-old partier is HIV-positive, as were eight other interviewees. The others had syphilis, gonorrhea, chlamydia, herpes, boils, warts and sore eyes. Most of the 20 male interviewees have two or more of the sexually transmitted infections, which they said they acquired through their participation in parties.

Dr. Jose Narciso Melchor Sescon, a reproductive health specialist and assistant director of Sta. Ana Hospital in Manila, said PnP carries all the dangers leading to disease and death. “Party and play is a warning that once you use drugs and you’re high, it impairs your judgment because you won’t be able to think well, so condoms for protection will be out of the picture.”

He said a partier also had the highest risk of contracting sexually transmitted infections other than HIV in every sexual encounter, especially if he did not know the health status of his partner.

Dr. Rolly Cruz, HIV coordinator of the Quezon City health office, deplores the reality that PnP is done by MSM “as frequently as you and I meet our friends for coffee” and without the use of condoms—still the best barrier for infections. “What complicates this concern is that no government intervention has been introduced so far,” he said.

In Quezon City, campaigning for the distribution and use of condoms and lubricants and for more accessible information and health services is done through Klinika Bernardo—the sundown clinic that caters to males seeking discreet and confidential medical checkups, tests and counseling after office hours.

Because the problem is pervasive, Cruz said Quezon City turned to the same platform that powers PnP—social media. “Through peer education, we do outreach and promote condom use through chatting, although the intervention can only reach up to that point, because we lose them,” he said.

Jhun Oliveros, peer educator and advocacy officer of the AIDS Society of the Philippines, said it was difficult for peer educators to gain access into PnP to encourage safe sex. “You have to be a participant to be able to educate,” he said.

The behavioral studies academic said he knew of some groups whose gatekeepers required condom use. “First, they have an understanding and sharing of health perspectives. Participants know their nonnegotiable rules—‘I don’t do drugs, I don’t have sex without condoms’—and then enjoy sex and see the health component of what they’re doing,” he said.

Some local governments such as Quezon City and Mandaluyong City have identified their PnP hotspots in hotels, condominiums and an entire barangay where the practice is rampant, but where interventions are also focused. They find their strength in nongovernment organizations that work on the ground and link MSM clans and groups to health services.

Kenjo said he stopped partying for a while because the “drug suppliers who also supply drugs to cops were pressured into identifying drug users among partiers.”

He added: “I got scared … but when there’s a new [PnP] invitation somewhere, I just go.”

(VERA Files is put out by veteran journalists taking a deeper look at current issues. Vera is Latin for “true.”)