LOOK: Kris Aquino insists she has no plans to run for senator in 2019 | Inquirer Entertainment
Close
menu
search

LOOK: Kris Aquino insists she has no plans to run for senator in 2019 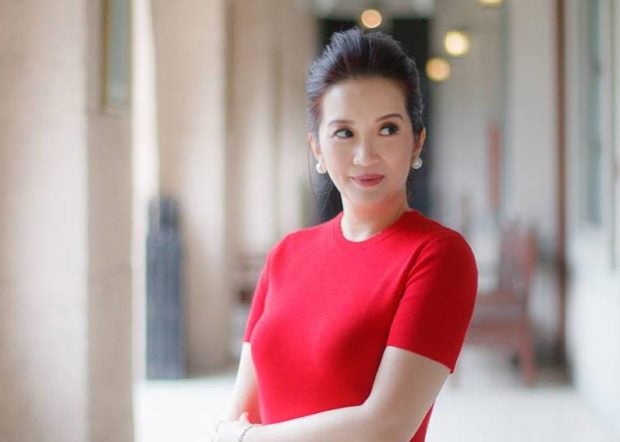 Media personality Kris Aquino maintained that she had no plans to run in the 2019 senatorial elections.

In an Instagram post on Thursday that featured a photo of the Queen of All Media sleeping and clinging onto her son Bimby, she reiterated her answer to the pestering question on whether she will follow the footsteps of her brother, former President Benigno Aquino III, into the world of politics.

She then asked the people to “mess with me about politics on Feb. 14, 2021, when she turns 50, which she said would be a “perfect” birthday for her.

Kuya is hunting for some limited edition sneaker (i’m clueless about what collab it is)… Bincai (videographer & photographer na sya) took this picture of me being a clingy mom… Bimb’s runny nose is almost clear but we’re still diffusing DoTerra Breathe & eucalyptus essential oils… i’m going to make it an early night… Better for me to sleep than patulan ang mga sinasangkot ako sa political issues nila when i’m super kulit in saying- i have no 2019 ambitions… so please mess w/ me about politics around February 14 in 2021- perfect 50th birthday celebration for me. 🎂❤️❤️❤️😂😘💋

While she keeps distance in political matters, she does not shy away from defending family members who are mired in controversy. She defended her elder sister Ballsy Aquino-Cruz from detractors after her husband was allegedly involved in a bogus road project in General Santos City. /ra

Why Kris Aquino is staying away from politics

Read Next
Contra mundum! ‘Larawan’ tops film fest, wins back theaters’ nod
EDITORS' PICK
Unleash the photographer in you this World Photography Day with vivo smartphones
Look Through: The fate of impounded stray dogs
DOH says COVID-19 cases plateauing, but public shouldn’t be ‘complacent’
What to watch out for when selecting a video surveillance solution
23,000 cops to be deployed nationwide for school reopening
House energy committee chair Arroyo bats for cheap electricity
MOST READ
Sharon Cuneta asks for prayers for friend in ICU who suffered silent stroke
Light therapy could be the answer to your sleep problems
Korina Sanchez reunites with former ABS-CBN co-anchors Julius Babao, Cheryl Cosim
PBA: San Miguel ousts Meralco to arrange finals duel vs TNT
Follow @KHallareINQ on Twitter
Don't miss out on the latest news and information.