It rained, but not on their parade | Inquirer Entertainment
Close
menu
search

It rained, but not on their parade 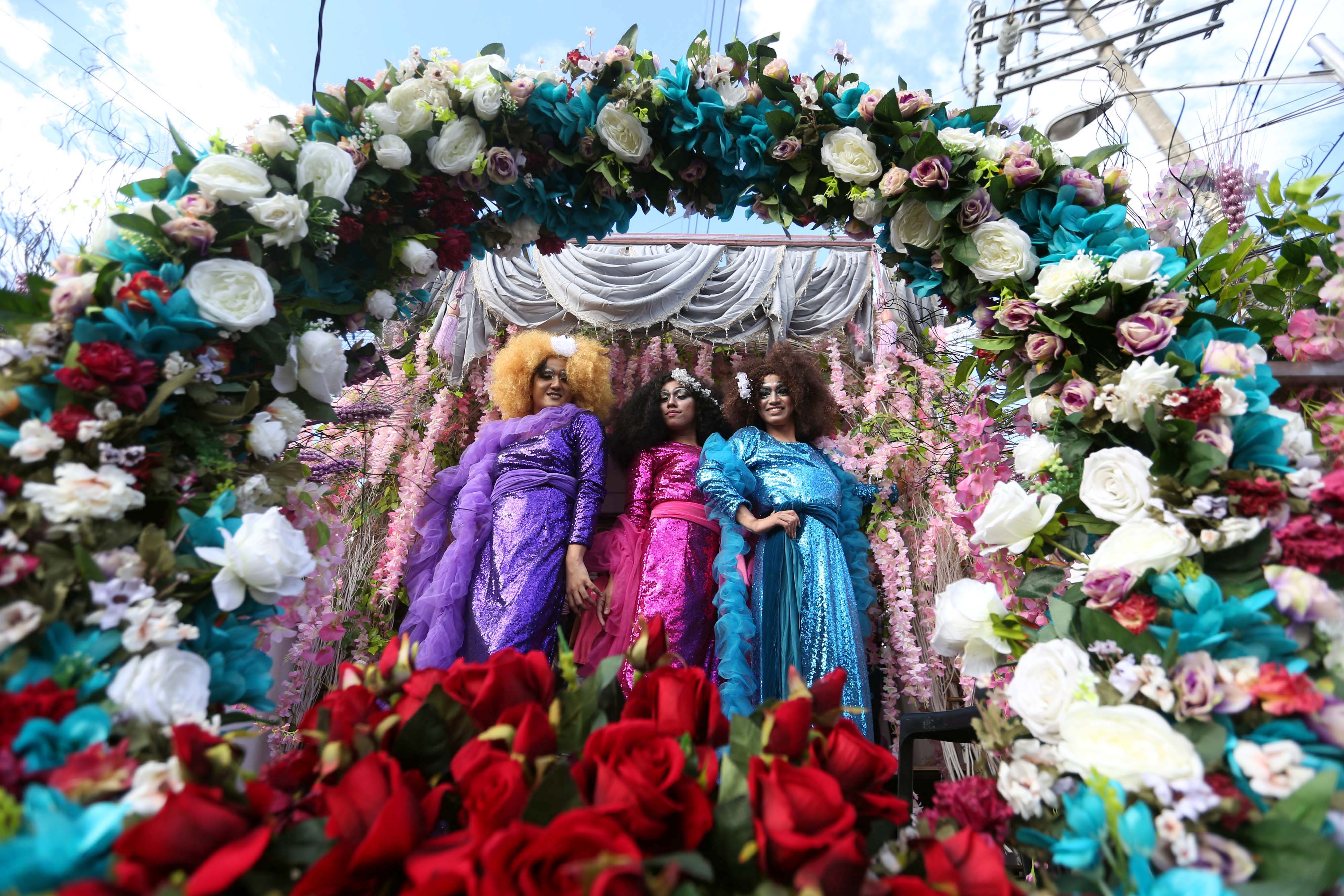 Rain was pouring in the hours leading up to the 43rd Metro Manila Film Festival’s (MMFF) Parade of Stars on Saturday afternoon, and for a moment, the participating artists feared that only a handful would show up for the annual motorcade.

Fans arrived in droves—and ready for the rain. Outside the gates of Muntinlupa Sports Complex, the starting point of this year’s parade, umbrella-toting fans swarmed their favorite stars and posed for selfies before the eye-catching floats.

“It was raining hard so we were all nervous and thought that, maybe, this year’s parade wouldn’t be as well-attended. And that would be a shame because this [was] my first!” singer-actress Rachel Alejandro told the Inquirer.

“But there they were on the streets, looking happy and excited,” said Alejandro, one of the lead stars of the musical, “Ang Larawan.” “Rain or shine—walang makakatibag dito (nothing can stop this),” Erich Gonzales, lead star of the movie “Siargao,” said. “I’m thankful to be part of this festival that has become a Christmas tradition for Filipinos. I always look forward to seeing the fans.”

The stars themselves made sure they were weatherproof.

Jane Oineza of the horror flick, “Haunted Forest,” brought her own raincoat and umbrella, just for good measure. “This is my first time joining the parade, which was something I saw only on television,” she said.

The motorcade veered away from its usual Pasay City-Manila route, and had its parade on the wider streets of Muntinlupa City, where the floats representing the eight competing entries were noticeably grander than in the previous year. 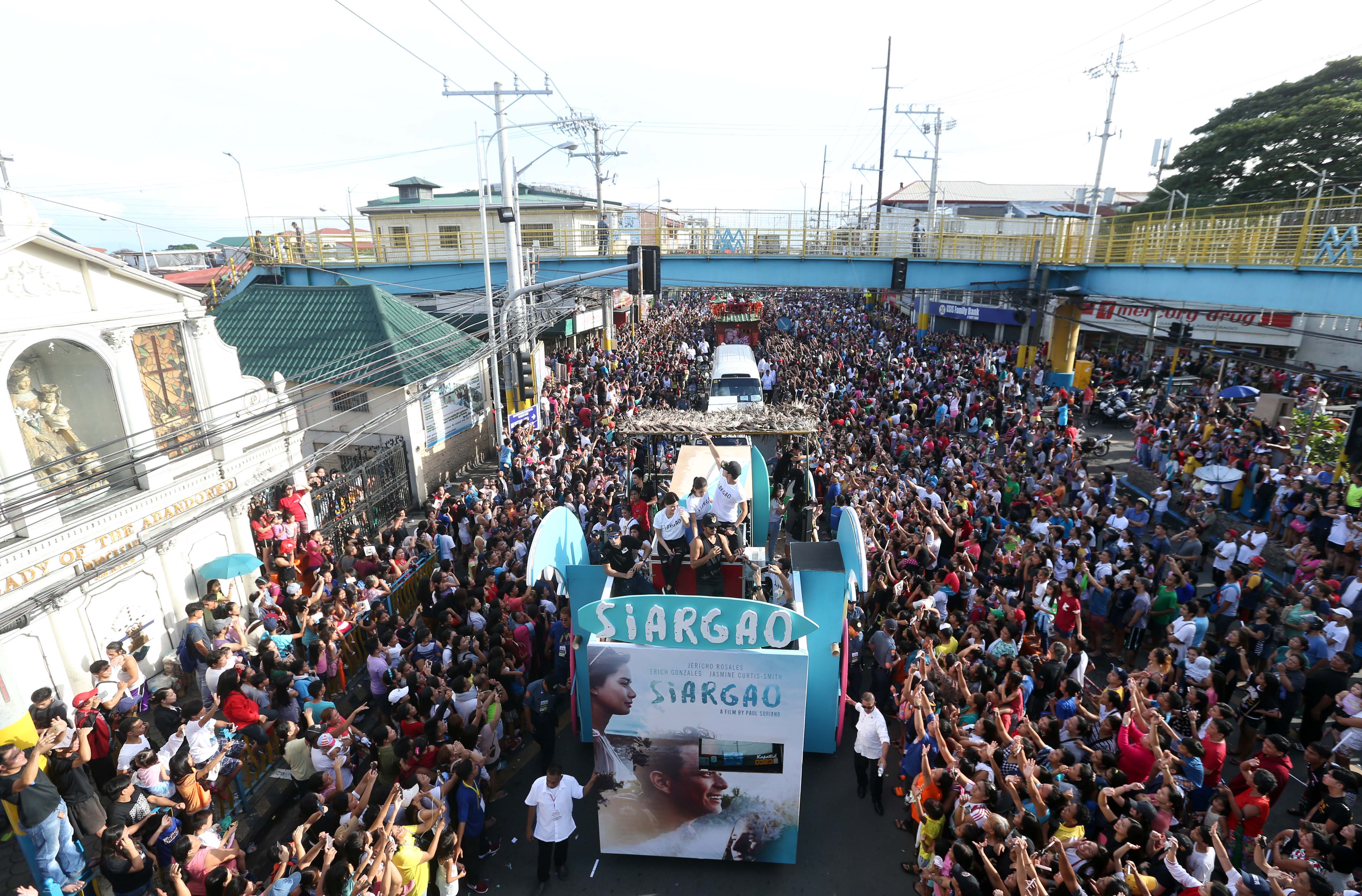 The floats began to move forward around 2 p.m., and followed a 5.4-kilometer route that traversed Buendia, Centennial Avenue and National Road, before entering Filinvest City. At the final stop at Filinvest Event Grounds, a short program was held.

“I hope the new [route] means that people who don’t usually get to see us at this time of year were able to do so this time,” Vic Sotto said of the comedy film, “Meant to Beh.”

“I wasn’t able to make it last year. I missed doing this and seeing the fans,” Sotto said. 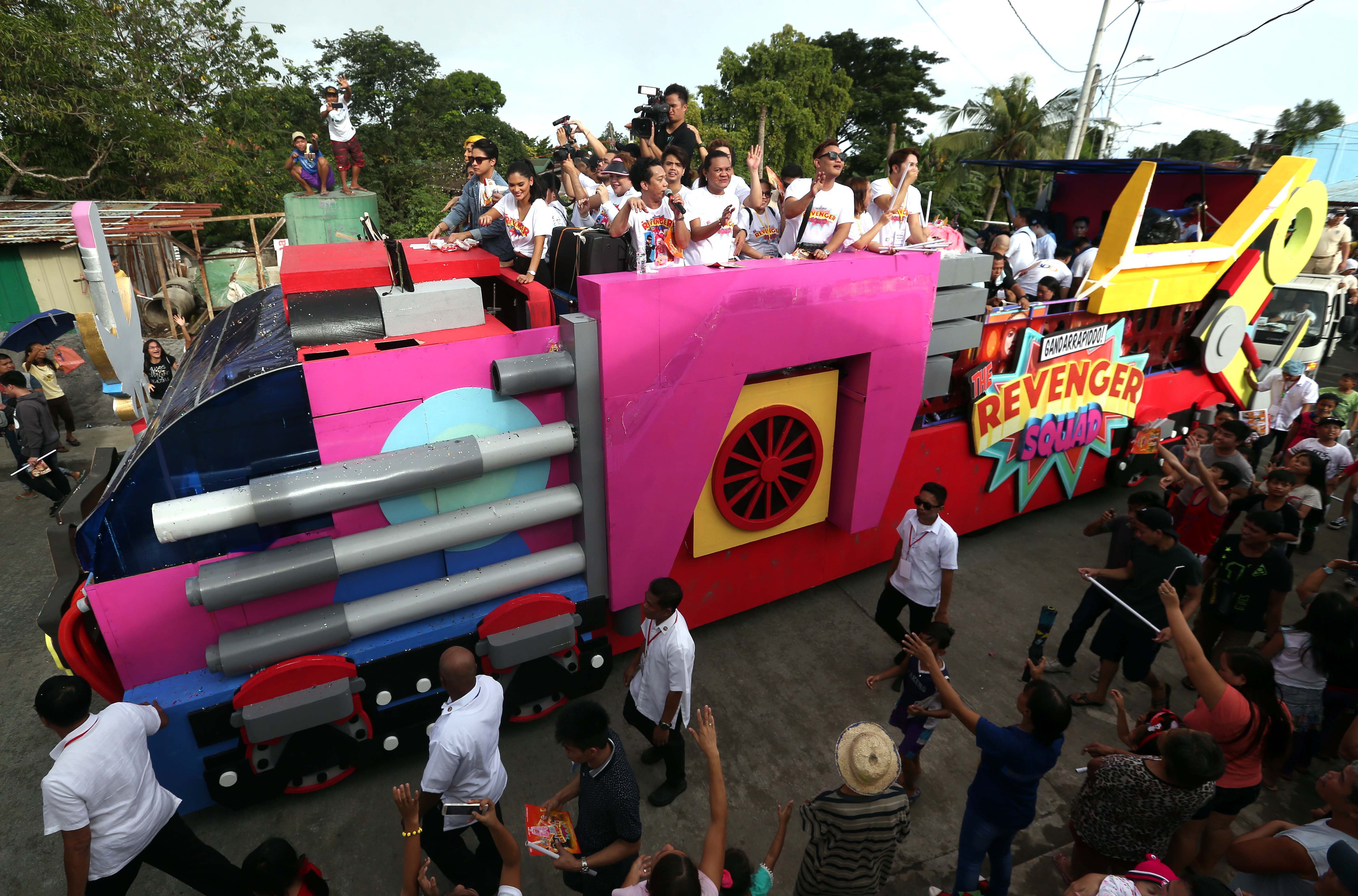 Fans lining the streets must have felt transported to the 1940s, as the cast of the musical film adaptation of the stage play, “Ang Larawan,” waved from their float in prewar attire. Led by Rachel Alejandro, Paulo Avelino and Celeste Legaspi, the cast rode on a float that resembled an ancestral house and had a giant image of Our Lady of La Naval de Manila.

Playing up its fantasy theme, the float carrying Vice Ganda, Daniel Padilla and Pia Wurtzbach of the comedy superhero movie “Gandarrapiddo: The Revenger Squad,” was a neon train bedecked with a mock-up of Gandarra’s magic lipstick staff. 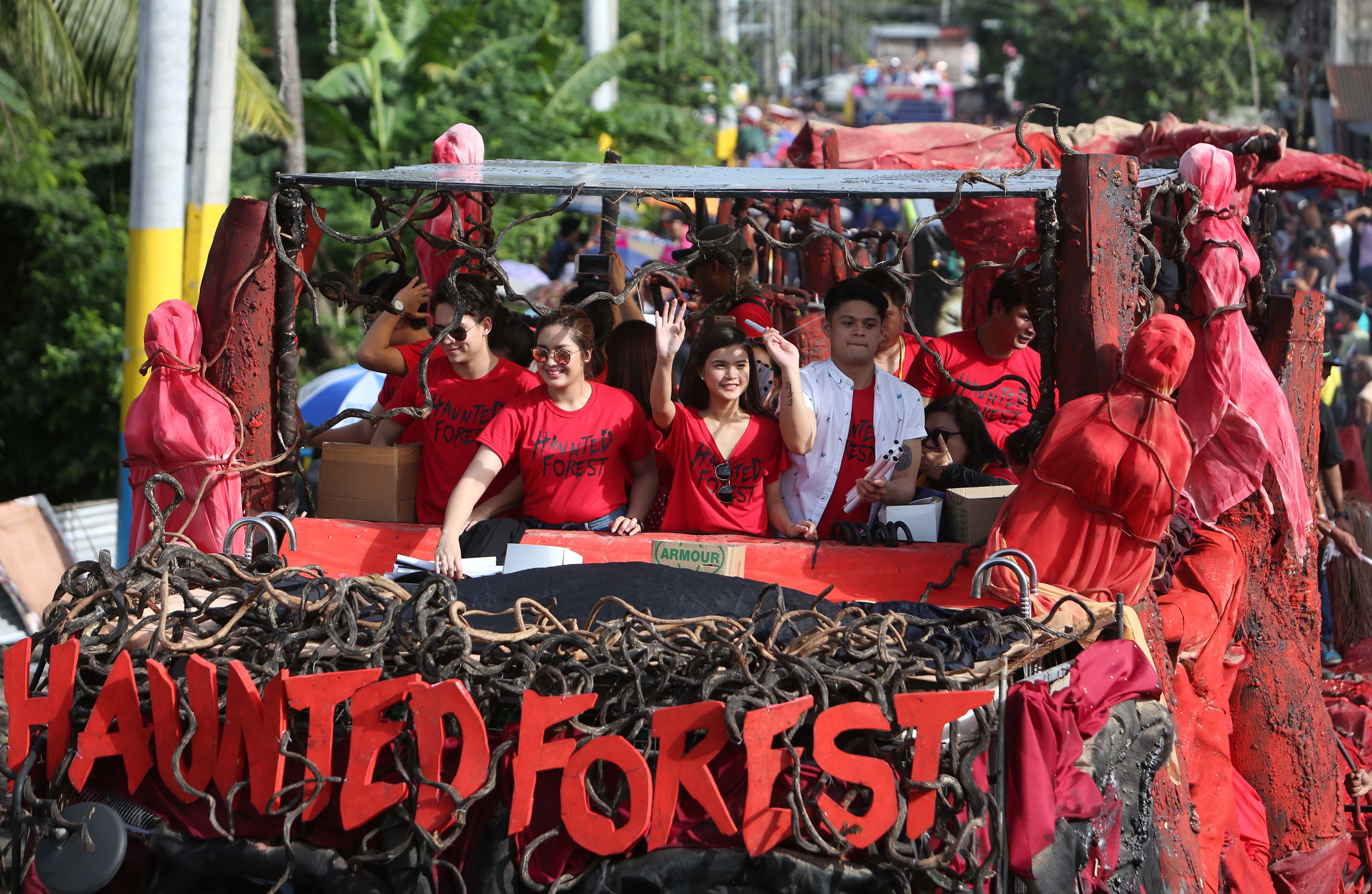 Red and black were the main colors of the “Haunted Forest” float, that was covered in ominous looking vines dangling the female prey of the supernatural creature sitsit. Despite its horror theme, the movie’s young cast, which includes Oineza, Jameson Blake, Maris Racal and Jon Lucas, looked anything but scary.

Looking like the old village of Jiufen in Taiwan, the predominantly red float of the romantic drama “All of You” was adorned with a traditional Chinese arch and paper lanterns. Lead stars Jennylyn Mercado and Derek Ramsay shot some of their scenes in the village.

The float of the romantic drama, “Siargao,” was relatively straightforward in comparison—with cutouts of the titular island’s famous waves, as well as surfboards on which portraits of the lead stars—Jericho Rosales, Gonzales and Jasmine Curtis-Smith—were printed. 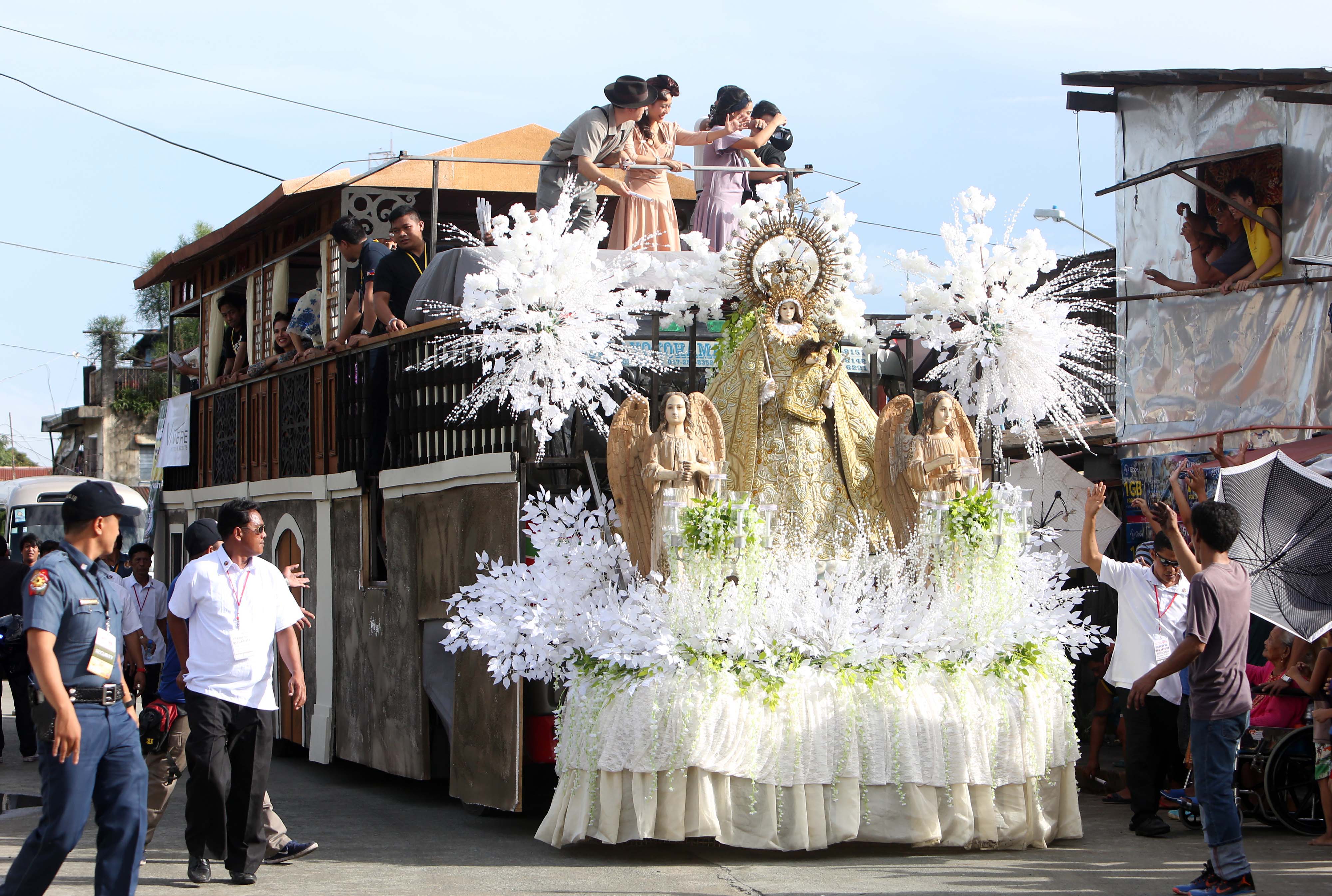 “Deadma Walking,” a gay-themed comedy starring Joross Gamboa and Edgar Allan Guzman, had a float that recreated a fake wake, the central plot device of the movie. The float, which had a coffin surrounded by crying divas, also had funeral bouquets and a dragon head accent that referenced a musical number in the movie. 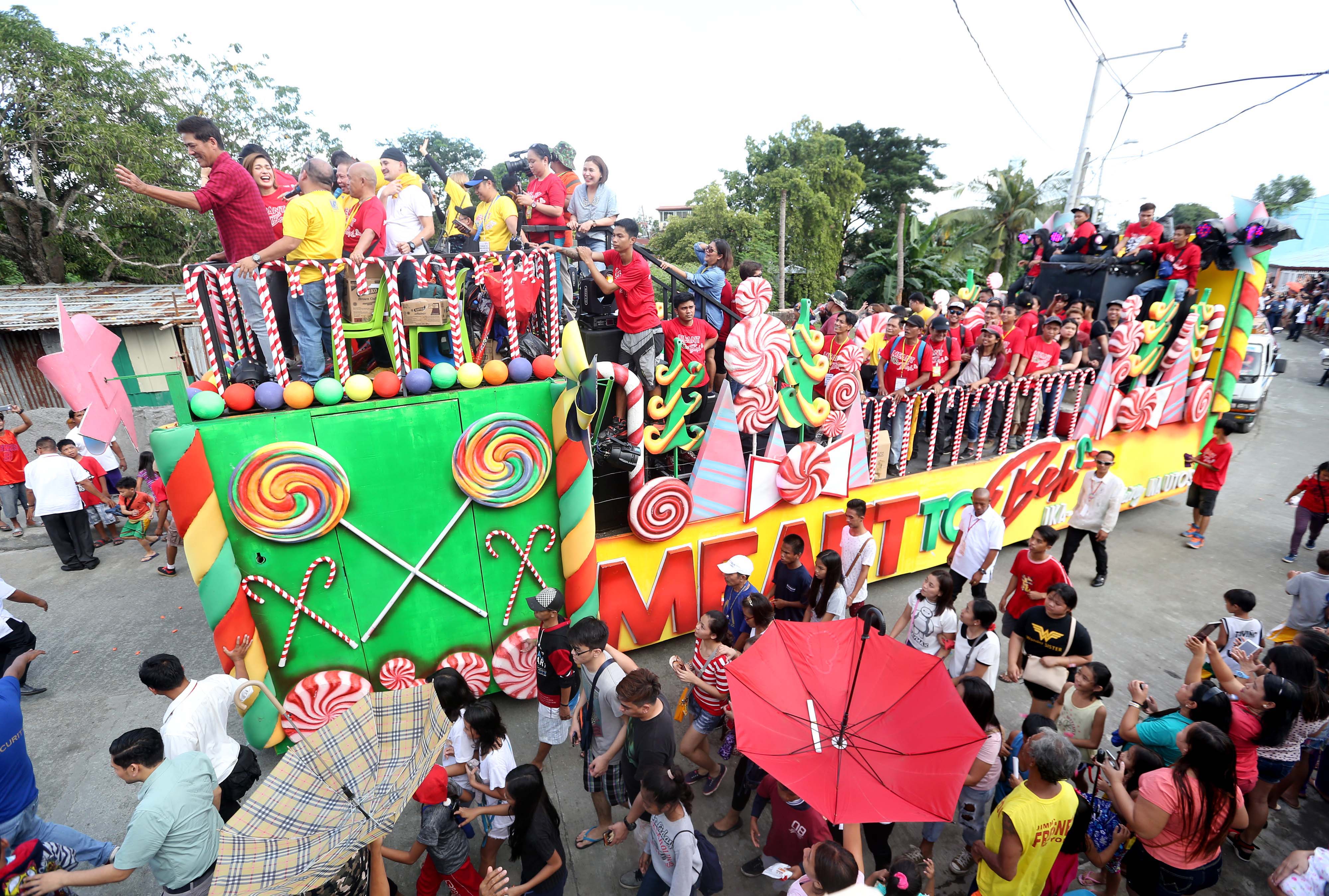 The decision was in line with the agency’s hope of bringing the parade to other cities in Metro Manila, Orbos said.