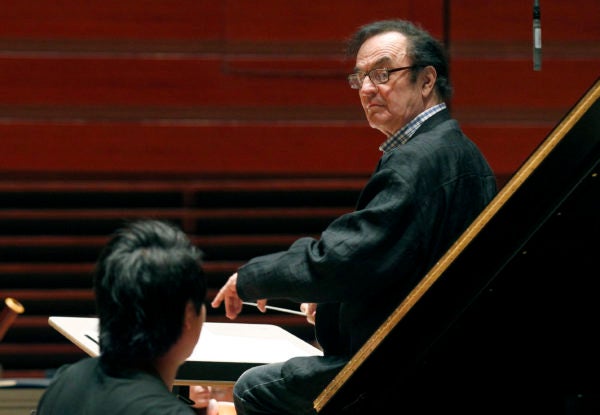 In this Oct. 19, 2011 file photo, world-renowned conductor Charles Dutoit, right, performs with the Philadelphia Orchestra during a rehearsal in Philadelphia. Four women have accused Dutoit of sexual misconduct that allegedly occurred on the sidelines of rehearsals or performances with some of America’s great orchestras. The 81-year-old is the artistic director and principal conductor at London’s Royal Philharmonic Orchestra. AP

SAN FRANCISCO — Three opera singers and a classical musician say that world-renowned conductor Charles Dutoit sexually assaulted them — physically restraining them, forcing his body against theirs, sometimes thrusting his tongue into their mouths, and in one case, sticking one of their hands down his pants.

In separate interviews with The Associated Press, the accusers provided detailed accounts of incidents they say occurred between 1985 and 2010 in a moving car, the two-time Grammy winner’s hotel suite, his dressing room, an elevator and the darkness of backstage.

Within hours of the story’s release Thursday, the Boston Symphony Orchestra and the San Francisco Symphony severed all ties with Dutoit. The New York Philharmonic released a statement saying Dutoit had withdrawn from conducting concerts there in January, and the Chicago Symphony Orchestra said Dutoit had withdrawn from six concerts there in March and April.

In statements, the orchestras noted the “very serious” and “extremely troubling” nature of the graphic and detailed accusations.

“He threw me against the wall, shoved my hand down his pants and shoved his tongue down my throat,” retired mezzo-soprano Paula Rasmussen recounted of an incident she said occurred in his dressing room at the LA Opera in September 1991.

Dutoit, who holds the titles of conductor laureate of the Philadelphia Orchestra and conductor emeritus of the NHK Symphony Orchestra in Tokyo, did not respond to multiple attempts to reach him through the Royal Philharmonic Orchestra and his office in Montreal. The Royal Philharmonic said Dutoit was currently on vacation, but that it had forwarded the AP’s emailed requests for comment directly to him. The AP also reached out to Dutoit’s office with several phone calls and emails.

In a long, distinguished career, he also has led highly regarded orchestras in Paris and Montreal, and traveled the globe as a guest conductor.

All four women said the Swiss-born conductor either lured them to a private place to discuss or practice music, or simply seized a moment alone to make his move. The women all said they resisted him and escaped.

The AP spoke with colleagues and friends of each accuser who confirmed the women shared details of their experiences at the time.

The women said they never filed formal complaints because they were young and Dutoit was the maestro, but felt inspired to come forward now by all the women speaking out about sexual misconduct by powerful men in other industries and by the Metropolitan Opera suspending conductor James Levine earlier this month after misconduct accusations surfaced.

Rasmussen said Dutoit summoned her to his dressing room repeatedly after attacking her, but that she never again went alone.

Baritone John Atkins, who was part of the production, said he stood guard for her after the incident “as a witness, for lack of a better term.” Atkins said he still remembers the cold stare from Dutoit. “He looked at me like, ‘Why are you standing here?’ And I looked at him like, ‘You know why.'”

Soprano Sylvia McNair, 61, herself a two-time Grammy winner, said Dutoit “tried to have his way” with her at a hotel after a March 1985 rehearsal with the Minnesota Orchestra.

“As soon as it was just the two of us in the elevator, Charles Dutoit pushed me back against the elevator wall and pressed his knee way up between my legs and pressed himself all over me,” said McNair who was 28 at the time. “I managed to shove him off and right at that moment, the elevator door opened. I remember saying, ‘Stop it!’ And I made a dash for it.”

McNair went on to perform with many of the world’s major orchestras and opera companies and said she does not feel traumatized by Dutoit’s behavior 32 years ago. “But what he did was wrong,” she said.

The other two accusers — both of whom say Dutoit assaulted them in 2006 — did not want to be identified, saying they feared speaking up because the power the famous maestro wields could lead to them being blacklisted from the industry.

One was a 24-year-old musician with the Civic Orchestra of Chicago when Dutoit arrived to conduct. She said he invited her to lunch at a restaurant, but then changed the venue to his suite at the Four Seasons Hotel, where he forced himself on her.

“He was just pushing himself against me, trying to kiss me, grabbing hold of my body, pushing his body on me,” she said. “I absolutely said no, pushed him away, went to the other side of the room.”

The other woman, a soprano, said Dutoit attacked her a few months later when she sang with the Philadelphia Orchestra in Saratoga Springs.

After a rehearsal, she said Dutoit called a meeting in his dressing room and, when others left, pressed her against the wall, restrained her wrists and pushed himself against her. He grabbed her breasts on two other occasions, she said — while they were riding in a car and also backstage, right before they walked on stage to perform.

Four years later, when the soprano performed again with Dutoit in Philadelphia, she said he pushed her against a wall and forced his mouth on hers.

“There is nothing wrong with him as a musician,” she said. “But he has been allowed to operate as a predator off the stage.”

Read Next
Celebratory ‘Larawan’ lights up regressive MMFF lineup
EDITORS' PICK
Why Tagle is a leading papal contender
House energy committee chair Arroyo bats for cheap electricity
PH resumes talks with China on Chinese-funded transport projects
Powered by style, innovation and passion
In Borongan, nuns play hoops (not mahjong)
A laptop that maximizes your WiFi so you can maximize your productivity
MOST READ
Imee Marcos bares illegal importation of white onions
Why Tagle is a leading papal contender
Zubiri on SRA mess: Shameful, disgusting
Arjo Atayde reveals proposal to Maine Mendoza was ‘more than a year’ in the making
Don't miss out on the latest news and information.