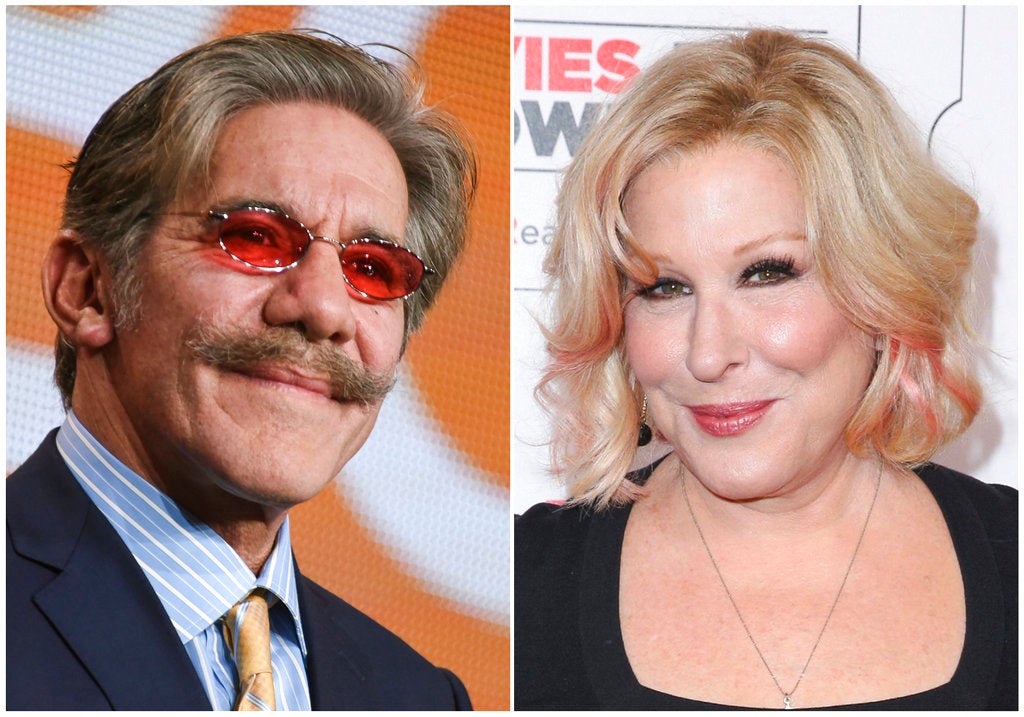 This combination photo shows Geraldo Rivera at “The Celebrity Apprentice” panel at the NBC 2015 Winter TCA in Pasadena, Calif., on Jan. 16, 2015, left, and Bette Midler at the 15th Annual Movies for Grownups Awards in Beverly Hills, Calif., on Feb. 8, 2016. Midler is renewing an allegation of sexual misconduct against Geraldo Rivera, a day after Rivera called the news business “flirty.” In a tweet posted Thursday by Midler and confirmed by her publicist, the actress-singer called on Rivera to apologize for an assault she said occurred four decades ago. (Photo by Richard Shotwell, left, and Rich Fury/Invision/AP, File)

In the tweet posted by the actress-singer and confirmed by her publicist, she included a video from the 1991 interview with Barbara Walters in which Midler made the allegation against Rivera.

“Tomorrow is my birthday. I feel like this video was a gift from the universe to me. Geraldo may have apologized for his tweets supporting Matt Lauer, but he has yet to apologize for this,” Midler posted, adding the harassment-solidarity hashtag “#MeToo.”

In the clip, Midler hesitates in recounting what she alleges happened with Rivera during his visit to interview her in the early 1970s, saying it will get her in trouble. “Get in a little trouble,” Walters encourages her.

After Rivera and a producer left their TV crew in another room, they “pushed me into my bathroom. They broke two poppers and pushed them under my nose and proceeded to grope me,” she said. “Poppers” is slang for the alkyl nitrites class of drugs.

“I did not offer myself up on the altar of Geraldo Rivera,” said Midler, calling his behavior “unseemly.”

After Midler tells Walters that she had no way of knowing “these things are going to come back to haunt you,” Walters suggests they discuss other subjects.

Midler came to prominence at the start of the ’70s, which included the release of her debut album “The Divine Miss M.”

Walters opened up the topic by asking Midler’s reaction to Rivera’s 1991 autobiography “Exposing Myself,” including what Walters called his account of a “torrid sexual affair” with Midler, whom he labeled “insatiable.”

Midler smiles, saying she was glad the book runs counter to her image at the time of the interview as that of a “somewhat straight-laced” older lady.

“The truth about it is I didn’t remember” such an affair, Midler said. “One thing I did remember is how I met Geraldo, and that was not funny,” she added, then recounted the alleged assault.

On Wednesday, Rivera waded into the sexual misconduct crisis that has spread through media, politics and Hollywood and snared “Today” show Lauer, fired after allegations were reported by NBC and in more detailed form by Variety and The New York Times. In his first public statement, Lauer said he is “truly sorry” to anyone he hurt by his words and actions.

Rivera tweeted that the issue is “so red hot right now there is no room for any thought or opinion but hang em high.” He added: “If News wasn’t (formerly) a flirty biz then how do we explain so many newsroom courtships that have led to happy marriages?”

Rivera also suggested there was a “slight chance” that those making allegations were motivated by big money settlements.

Responding to his statements, Fox News Channel issued a statement Wednesday, saying, “Geraldo’s tweets do not reflect the views of Fox News or its management. We were troubled by his comments and are addressing them with him.”

Rivera apologized hours later, saying he “didn’t sufficiently explain that this is a horrendous problem long hidden” and “harassers are deviants who deserve what is coming to them.”

Fox has dismissed two high-profile men over sexual misconduct allegations involving their behavior while at the news channel, host Bill O’Reilly in April and CEO Roger Ailes, who was fired in 2016 and died earlier this year. MKH