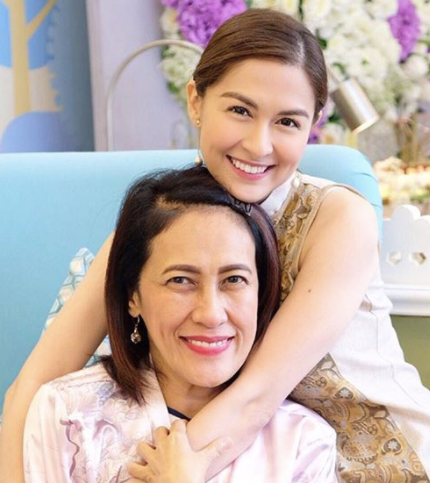 In a series of recent Instagram posts, the actress posted photos of her spa-themed bridal shower, where guests donned robes designed by Nailandia, a spa service brand endorsed by Rivera.

Apart from Rivera, who she calls “kambal,” the bride-to-be thanked her attendees including concert queen Pops Fernandez, actress Valeen Montenegro and her daughter Sophia delas Alas.

The attendees were in full pampering gear as they wore pastel robes that matched the relaxing vibe of the event.

The comedienne is set to marry her fiancé , Gerald Sibayan, this coming Dec. 12. Her entourage includes Megastar Sharon Cuneta, as her matron of honor; and Rivera, as the couple’s veil sponsor.

Rivera has also offered to pay for Delas Alas’ bridal gown by Frederick Peralta as her wedding gift to the comedienne.

While she already experienced getting married twice (she’s separated), Dela Alas will have her first church wedding.

Delas Alas was previously married to her second husband, businessman Jed Salang, but she separated from him after a month over allegations of physical abuse. /ra