“Thor: Ragnarok” has stood out from previous Thor films in part because of its rocking soundtrack. Led Zeppelin’s “Immigrant Song”, with its iconic battlecry plays in two key fight scenes of the movie.

However, someone was not pleased with the choice of song. That man was Jack Black.

In a video message on Instagram, he told off “Thor: Ragnarok” for imitating “School of Rock”, which he starred in as a school teacher obsessed with rock music.

“They totally bit our style, totally poached our jam. Now they’re parading around town like they thought of it,” said the offended actor.

“I’m calling you out Thor. I challenge you to a battle of the jams,” he declared.

Director Taika Waititi, despite choosing the song and obtaining the rights to it, left the battle to Chris Hemsworth who plays Thor.

The ever-friendly Chris Hemsworth then issued a video message. “You’re right you got me,” he told Black.

He pointed out, “You stole it too. As Oscar Wilde once said, ‘Talent borrows, genius steals,’ so we’re both guilty of the same crime.”

“We would’ve used your song, but as you said in your song, ‘this is not the greatest song in the world,’” he said in reference to Black’s song “Tribute” which he wrote while in comedy rock band Tenacious D.

He also admitted he didn’t know what “battle of the jams” meant exactly.

“I know what jam is, jam on toast… and just general jamming,” said the hunky star as he did an imitation of a rock band. 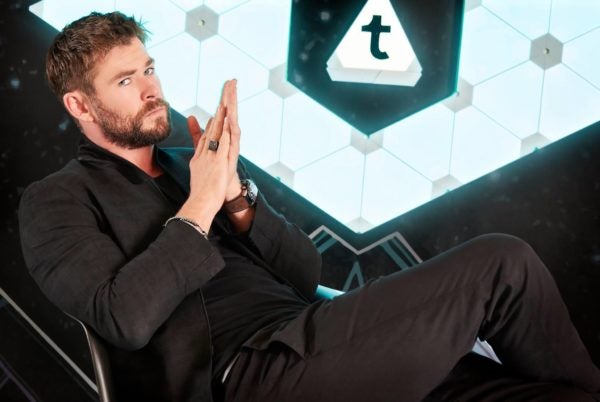 Chris was up for the battle of the jams—whatever that meant. Image: Facebook/@thor

“My place or yours baby, I’m in,” said Hemsworth.

As it turned out, there was no need for the men to step in as Cate Blanchett, who played villain Hela, took care of it.

WATCH: Kneel for your Queen: Cate Blanchett is Hela in “Thor: Ragnarok”

She and Black co-star in “The House with a Clock in Its Walls” and went into a slow-mo dance battle with “Immigrant Song” in the background.

Either way, both “School of Rock” and “Thor: Ragnarok” should be honored to have “Immigrant Song” in its soundtrack. Led Zeppelin is extremely selective about who could use their songs.

In 2003, Black was so desperate that he addressed the band as “the gods of rock” and said “the movie will crumble into smithereens” without it.

For “Thor”, Waititi told Business Insider that it took the duration of the entire movie production before Led Zeppelin gave its blessing. JB