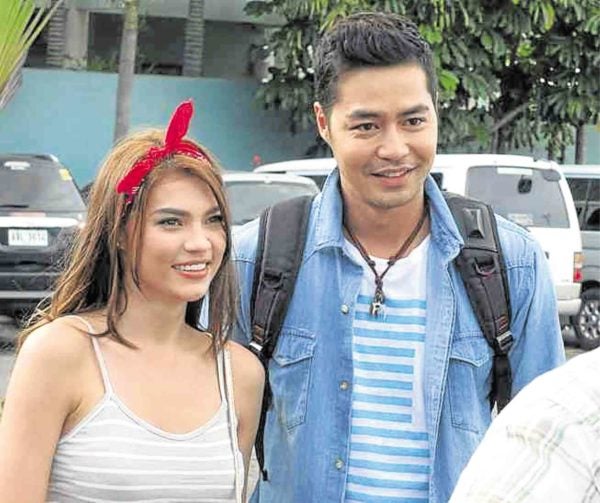 Actress Rhian Ramos claimed she was never the type who would “get involved with a man just because she’s too afraid to be alone.”

The star of the screen rom-com, “Fallback,” declared: “I enjoy being single as much as being in a relationship.”

The 27-year-old actress, who has been dating Chinese businessman Jason Choachuy since 2014, admitted that she once became another guy’s emotional fallback, or the girl he has lined up in case his current relationship failed.

“By the time he broke up with the girl, I was already in a relationship. He then courted me and that created problems for my current guy. In a sense, we became each other’s fallback,” Rhian shared with reporters during the press conference for the Jason Paul Laxamana film distributed by Star Cinema.

Jason, who also wrote the script, said the material was inspired by a British study that said almost 50 percent of women (in the United Kingdom) have fallback lovers.

“I wanted to explore that idea when I created the characters of Michele (Rhian) and Alvin (Zanjoe Marudo),” he explained, adding that he had yet to find a similar research involving Filipino respondents.

Jason also differentiated the idea of a fallback lover from a rebound guy: “The latter is considered a panakip-butas. After one gets her heart broken, she finds a replacement to fill the void, while the fallback lover is her reserve. She starts looking for one even while she is still in a relationship.”

Rhian pointed out: “Honestly, it’s not fun to have a fallback. Given the chance, I’d rather not have any. But if asked, I’d rather be a fallback lover because, at least, I know who I want for myself and I’m not the one who’s confused. It also means that the ball is in the guy’s court.”

Her leading man, Zanjoe, agreed: “I’m the type who always wants to be on the safe side, so I’d rather be the fallback. I see nothing wrong with being one. What’s more important is that my intentions for her are pure, that I’m sincere, and I truly care for her.”

Zanjoe’s last publicized relationship was with fellow ABS-CBN contract artist Bea Alonzo—it ended in January 2016. He is now rumored to be dating Bela Padilla, his leading lady in the defunct drama series, “My Dear Heart.”

Zanjoe insisted that a fallback lover was “not necessary.” The 35-year-old actor explained: “You only start looking for one if you feel that your current relationship is already shaky. You do it to make sure you will not feel too lonely when it finally ends.

“But I’m the kind of person who takes my time after each breakup. I believe that I don’t have to look for someone to love. The two of us will eventually meet, at the right time. I want to get to know her first; to first be certain that I’m in love with her.”