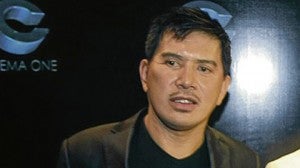 After nearly three decades, a Filipino film, Brillante Ma. Mendoza’s “Captive,” will compete in the main section of the Berlin International Film Festival, which will be held in the German capital on February 9-19 next year.

Mendoza, who is in Mindanao doing research for another project, told the Philippine Daily Inquirer in a phone interview Tuesday he was happy to have his work included among the first five films selected for the festival—along with such high-profile Oscar contenders as Zhang Yimou’s “The Flowers of War” (Out of Competition) and Stephen Daldry’s “Extremely Loud and Incredibly Close” (Out of Competition).

Mendoza said it was important to join a festival that was one of the biggest film markets in the world—second only to Cannes. “The Philippines will gain the attention not only of festival-goers, but of film distributors and producers from all over the world.”

Mendoza’s “Captive,” which top-bills French actress Isabelle Huppert with Filipino actors Ronnie Lazaro, Raymond Bagatsing, Angel Aquino and Sid Lucero, among others, will have its world premiere at the Berlin festival, alongside Antonio Chavarrias’ “Dictado” from Spain and Edwin’s “Postcards From the Zoo” from Indonesia. (Other entries in the main competition will be announced later.)

Mendoza said Huppert, an icon of world cinema, was pleased on hearing the good news. “We had a private screening of the film in Paris on December 12 and she said she was happy with the final cut.”

“Captive,” formerly titled “Prey,” tells the story of a foreign aid worker (Huppert) who gets kidnapped, along with Filipinos, by bandit groups in Mindanao.

“If I’m not mistaken, the last time the country competed in the main section of Berlin was 29 years ago, with Ishmael Bernal’s ‘Himala,’” Mendoza recalled.

Mendoza himself won the Caligari Prize in Berlin’s Forum section for “Tirador” in 2008. In 2009, he won best director at the Cannes International Film Festival for “Kinatay.”

“Being included in the main competition of a major festival will help boost awareness of Filipino cinema. It will make global audiences regard Filipino films more seriously. It will open doors for other Filipino filmmakers as well,” he said.

Mendoza said another Filipino film, Rommel Tolentino’s “Nono,” was included in the Generation section of Berlin 2012.