Kakai Bautista on Ahron Villena: ‘Yes, I loved him’ 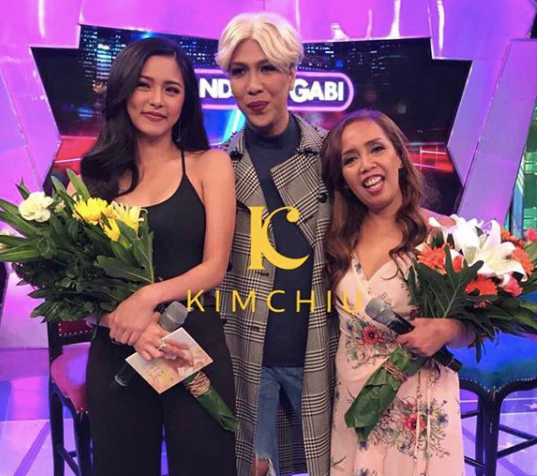 A more confident and completely healed Kakai Bautista now pokes fun at a heartache she once endured from her estranged best friend, actor Ahron Villena.

In a recent guesting on ABS-CBN’s Sunday comedy talk show “Gandang Gabi Vice” with Kapamilya actress Kim Chiu, the comedian went all out in her revelation as to how she felt at the time she was weighing things with the actor.

Vice Ganda opened up by asking Chiu what she was telling Bautista during those rough times.

(I kept on asking her: are you two together? She doesn’t answer but they travel together, they travel and go on road trips in Hong Kong, Singapore, like that.)

Bautista however denied that she shouldered all the expenses. She in fact said that they equally shared in all their travels together.

This then prompted Vice Ganda to ask Bautista, “So mag-ano nga kayo ‘non?” (So what was your real status then?). She answered, “Magkaibigan” (Friends).

Bautista’s follow through then earned a reaction from the audience, “Baka mamaya sabihin na naman niya, there was never an us. Charot.”

(He might later say again that there was never an us. Joke.)

(Okay, it’s nothing, then! Nothing, nothing! If you’re happy about that, then it’s nothing.)

It was at this part that she boldly answered hard-hitting questions from Vice Ganda and Chiu.

Just as she was poking fun at her answers in a toned up voice, Chiu supplemented Vice Ganda’s question by asking, “Galit ka, galit ka?” (Are you angry, are you angry?), Bautista then gave out another “Oo naman!” (Yes I am.)

Her answers earned explosive reactions altogether from Vice Ganda, Chiu and the audience.

In the heat of the moment, Chiu asked again, “Mahal mo, mahal mo?” (You love him, you love him?) and it is without a moment of pause that Bautista straightly admitted, “Oo minahal ko, minahal ko!” (Yes I loved him, I loved him.)

Still in the heat of the discussion, Vice Ganda pushed further by asking “Nasaktan ka, girl?” (Were you hurt, girl?) At that point, the audience was rocking in their seats in laughter.

But still, Bautista boldly answered, “Oo naman!” (Yes, I was!). Still not done with his laughter, Vice Ganda asked what others have been accusing Bautista at the height of her controversy with Villena, “Umasa ka?” (Were you hopeful then?)

However, the streak of “oo naman” (yes, of course) answers changed when Vice Ganda asked Bautista if something physical happened between her and Villena. She loudly answered, “Wala nga eh!” (Nothing!)

Bautista, with how she humorously faced and answered the questions, appears to have indeed completely moved on, and is finally happy again. JB

Cacai Bautista: Me assuming? Who has never assumed in his life?