Cacai Bautista: Me assuming? Who has never assumed in his life? 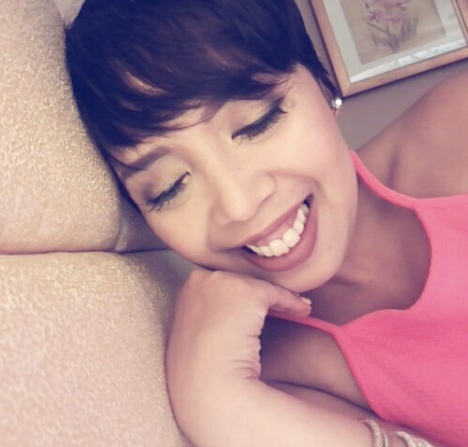 Following Kapamilya actor Ahron Villena’s denial of a supposed “past romance” with comedienne Catherine “Cacai” Bautista, online bashers have ridiculed her as too “assuming.”

Villena’s “Naging tayo ba“ (Were we ever together?) statement caused an online stir and created a backlash against Bautista. The actress-singer has remained adamant, though, answering back at her detractors without batting an eyelash.

In a series of recent Twitter posts, the comedienne, point by point answered her bashers. “No one in his life has never assumed,” she said in defense of herself, because as normal human beings, “everyday, we assume and anticipate. So, WAG AKO (DON’T POINT AT ME).”

She also blasted a netizen who asked her to “Define ASSUMING.” Bautista threw back the question to Instagram user Nette De Jesus and said, “Define it yourself, I’m sure once in your life nag assume ka (… you assumed).” She ended her response with sarcasm, “Kaya mo yang sagutin di ka robot diba” (You can answer it, you’re not a robot, right)?” 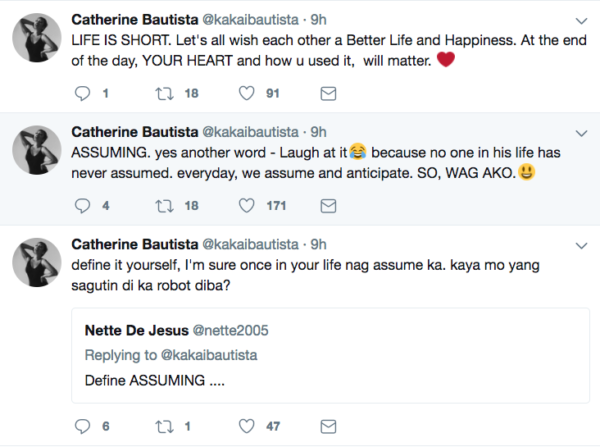 Bautista also said that she was used to being in the “friendzone” and being called “bitter” and “panget (ugly).” “I am not mad at all.”

She added: “I am grateful that people see me as a human being – IMPERFECT.”

Bautista also sent out a message: “Kids, there is so much more important things than being seen and heard in Social Media. Enjoy your lives and be responsible. LIVE it.”

She also thanked her followers “for reminding me that Social Media is not all that sh*tty.”

Last July 21, Bautista posted a cryptic message, “Wise men don’t waste their time and energy on insignificant things.” Was she referring then to her now estranged “best friend”?

Villena and Bautista previously declared on social media that they were “best friends.” In the actor’s lengthy Facebook post on July 23, he said that despite the sad turn of events, he still regarded her as a “best friend” and expressed the hope that they would get their friendship back to normal after the issues have died down.  /ra