Actress-TV host Donita Rose has taken to social media to ask the public for prayers for the speedy recovery of her dear friend, actress-singer Isabel Granada, who is reportedly in a coma.

In her post, she said “I dont normally post stuff like this but a dear friend from ‘That’s Entertainment’ needs prayers. I believe that prayers can move mountains esp when many are in agreement. She’s only 41 and has so much to live for still.” 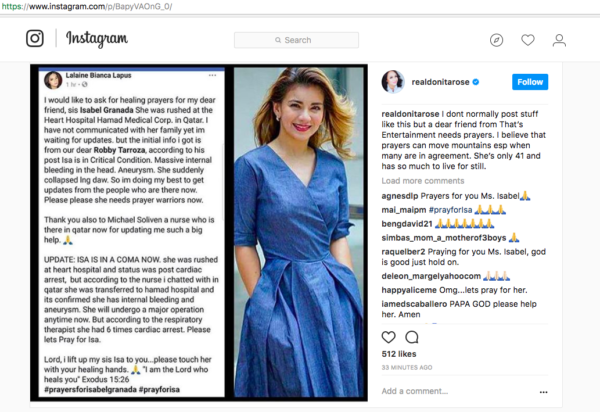 Granada is in a coma reportedly due to internal bleeding from aneurysm, and is in a hospital in Qatar at the moment. It is through the Facebook post of her friend, actress Bianca Lapus, that Granada’s condition was made known. Granada was admitted at the Hamad General Hospital.