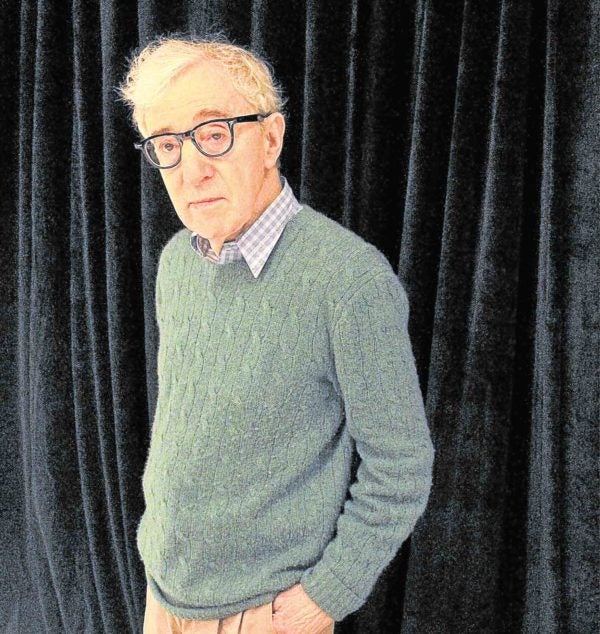 LOS ANGELES—In this part two of our column on Woody Allen, who turns 82 in December, he talked about how he has moved on from “Wonder Wheel,” wrapped up his untitled film, and is now prepping for the next one; his former, current and next muses Diane Keaton, Kate Winslet, Elle Fanning and Selena Gomez; and his comment on the Harvey Weinstein sexual allegations.

He told us that he is about to finish his untitled movie featuring Elle Fanning, Selena Gomez, Jude Law, Liev Schreiber, Diego Luna, Rebecca Hall, Suki Waterhouse and Timothée Chalamet. He already has a title for his next film.

“The joy of making movies is different for each person,” he explained his passion for filmmaking after more than six decades. “One moviemaker is thrilled when he can show his movie to the public. Another one does it for the money. Another one does it to get artistic fulfillment. I enjoy the process.

“I don’t care about the money. I never have. Very often, I’ve put my whole salary into the picture so I could reshoot scenes and make them better. I worked the whole year for nothing at all, no salary. I don’t care about awards or what people say about it, whether they’re critics or the public.

“When I was 12 years old, I thought the pleasure would be, to go to the Academy Awards, win awards and you’re surrounded by scintillating men and beautiful women.

“But, when you grow up, you find that the pleasure is in the work itself. You try to make a great movie and you’re always failing. But you’re always pushing the rock up the mountain. It’s great fun to deal with the problems of moviemaking. Then, you make your movie and it’s over. You give it to the company that financed it, and they put it out. And I have gone on to the [next] one.”

With typical amusing candor, Woody said, “‘Wonder Wheel’ is coming out now. I’m obliged to do some promotion for it, or else I would seem like a terrible person who takes their money and not help out. But it’s long in my history.

“This week, I finish my next movie, the one with Selena Gomez, Timothée Chalamet, Liev Schreiber and Jude Law. So I’m not interested in ‘Wonder Wheel’ anymore. If people like it, that’s delightful. If they don’t, I’m not interested. Either way, my life doesn’t change.

“If the film is a success, I don’t get any younger or healthier. So, it’s the work itself that is important. If you are doing the work for some other reason—to get famous, get rich, be an artist—then you’re making a mistake.”

Told that Kate Winslet said Woody is so attuned to his feminine side that he writes these memorable female characters, Woody pointed out, “Everybody does have a masculine and feminine component. I do as well, I am sure. I have told this story many times—I never could write for women when I first started doing movies and when I was the star. I wrote always for men.

“Then, I got into a relationship with Diane Keaton and we lived together for a couple of years. We remained close friends all our lives. I was so impressed with everything about her, that I started writing for her.

“I started seeing perspectives through her eyes, through a woman’s eyes. Then, I started to enjoy it. I found that female characters were more interesting to me than male characters. There was more complexity and a great spectrum of emotions.”

Speaking of Diane, Woody’s reaction—when he was informed that the actress said in an interview that he was her greatest lover—was classic Woody Allen.

“Wait, say that again, because my hearing aid…,” he cracked. Upon hearing it again, Woody could only mutter, “Well…”

On what makes a man a good lover, Woody said, “I was passionately committed to Diane. I always think it’s relational—the woman brings it out of you, and the man brings it out of the woman. I was crazy about Diane for the couple of years that we went out. Then, we lived together for a couple of years. So it was a labor of love—to make love with her, to do anything with her, was always a treat.

“Keaton is someone who lights up a room when she comes into it. She lights up the whole block. She has an amazing, scintillating personality. She has become an icon over the years. Every young actress I work with says, ‘Oh, you worked with Diane Keaton.’ I am always answering questions about her. She was inspiring in every way.

Known for his remarkably short audition meetings with actors he is planning to cast, Woody answered our question on how he came to cast Selena in his untitled film set to be released next year.

“I knew Selena from a distance, but I never met her,” Woody recounted. “We cast according to who we think is perfect for the role. For years, I cast with Juliet Taylor. She retired, so I am with her assistant now, Patricia DiCerto. We sit in a room and read the script. We go, ‘Who would be perfect to play this person?’

“She comes up with a list the next day, then we say, ‘What about Selena Gomez? Can she act? She’s a singer.’ So, we look at what we have on her. There was very little, but she was good in what did exist. So we asked her if she would come to New York, which she did.

“We asked her, would you read some of the character (lines) for us? I don’t usually do that. She did, and she was impressive. I read with many women her age. It’s hard to find the exact proper person for the part because you have a specific character in mind. Selena had it all. I felt that I was very lucky to get her.”

Woody himself was accused of sexually abusing Dylan, his adopted daughter with Mia Farrow. He was cleared of all charges.

Pressed specifically on his view about the Weinstein allegations, Woody commented, “The whole Harvey Weinstein thing is very sad for everybody involved. Tragic for the poor women who were involved, sad for Harvey that his life is so messed up. I think the reportage on him has been good from the (New York) Times and the New Yorker. There are no winners in that. It’s very sad and tragic for those poor women who had to go through that.”

On his long enduring career, Woody reflected, “I have been very lucky this way—I can always do what I want to do. I am limited, but I have had unlimited freedom. So if a picture is not good, it’s me. I make whatever story occurs to me at the time.