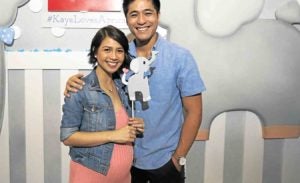 Kaye Abad has played mother roles onscreen a handful of times in the past. But, approximately three months from now, she’ll get to be one—“finally”—to a baby boy.

“I wanted to have a son first, so I was happy when I found out I was having one.” Kaye, who’s married to actor Paul Jake Castillo, told reporters at a recent “gender reveal” party mounted by the baby product brand Aprica in Cebu City, where the couple is based. “I want to have two kids, but my husband wants three! We’ll see about that.”

The 35-year-old actress was initially worried that she would have a difficult time getting pregnant. “I’m not exactly at the ideal age, so I couldn’t help thinking about it. Pregnancy becomes risky as you get older. And it’s my first try, too, so I have to be extra careful,” she said.

“I put a lot of pressure on myself, and I had to learn to let go of that. Fortunately, when I stopped stressing myself out, I was able to conceive … We had to wait only four months after our wedding,” related the Kapamilya actress, who tied the knot with Paul Jake in December last year.

Emotionally, Kaye said she’s ready to be a mother. “Being a responsible parent, however, is something I’d need to figure out in the future. We’re excited to learn,” she said. 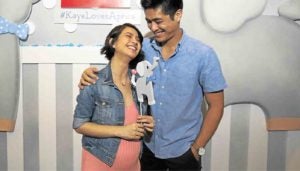 The couple has yet to come up with a name for the baby. At first, Kaye said, she gravitated toward “John Lucas.” Then, it hit her: “We realized that his initials would be JLC!” quipped the actress, alluding to ex-boyfriend John Lloyd Cruz. “Baka sabihin ng mga tao, hindi pa rin ako nakaka-move on,” she said, laughing.

Because Kaye plans to raise their future baby in Cebu City, where she has been living since getting married, acting had to take a backseat. “I remember teasing Tita Cory (Vidanes, ABS-CBN chief operating officer) to just transfer me to ABS-CBN Cebu—I can host a cooking show!”

The truth is, Kaye misses acting. “I ate what I said … I remember saying in past interviews that I would quit show biz once I got married, so I could focus on building my family,” Kaye related. “Now, I avoid watching teleseryes because I miss being in one.”

But family, she stressed, is her top priority. “I don’t want not being able to take care of my baby because of taping,” she said. “I don’t want that.”