JoWaPao could be the next TVJ | Inquirer Entertainment

JoWaPao could be the next TVJ 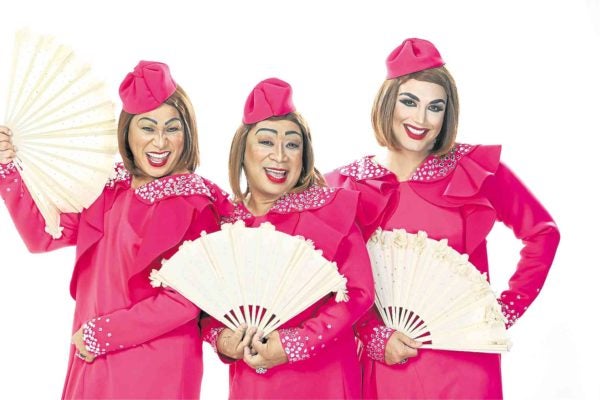 The comedic chemistry among Jose Manalo, Wally Bayola and Paolo Ballesteros—who play the riotous and beloved lolas of “Kalyeserye”—has elicited comparisons to that of Sen. Tito Sotto, Vic Sotto and Joey de Leon. “JoWaPao,” fans proclaimed, is the next “TVJ.”

But while they’re flattered that some people hold them in such high regard, Jose, Wally and Paolo all agreed that they still have a long way to go.

“Marami pa kaming kakaining bigas,” Wally said in a recent interview on the set of the talk show, “The Lolas’ Beautiful Show,” which airs weekdays on GMA 7 before “Eat Bulaga!”

Jose, on the other hand, stressed that Tito, Vic and Joey were industry stalwarts that could never be replaced.

“It makes us happy when people say that we’re following in their footsteps. But, to achieve what they have achieved is a tall order—malayo pa kami,” he said.

Perhaps they feel that “successor” is too presumptuous of a word; “student” may be more apt. After all, Jose, Wally and Paolo pointed out, hosting “Bulaga!” with Tito, Vic and Joey was always a learning experience.

“They trained us. They play along with whatever jokes we come up with. We apply whatever we’ve learned from them to our comedy. Wally, Paolo and I may present a different style of humor, but still, all of that came from Tito, Vic and Joey,” Jose related.

“But, apart from the tips about comedy or timing, we also learn a lot from their advice about show biz,” Wally added.

Jose, Wally and Paolo’s compelling and cracking rapport—particularly as Tinidora, Nidora and Tidora, respectively—comes out naturally, because they spend most of their working hours together, allowing them to know each other’s humor and quirks.

And if you think the three hosts are already crazy hilarious on TV, wait till you see them behind the cameras.

“Mas magulo pa kami off-cam, because we get to say things we usually filter on television, especially when we get lost in good conversations,” Jose said.

In “Lolas’ Beautiful,” Tinidora, Nidora and Tidora invite celebrities into their home for a casual chikahan about all things positive and inspiring.
“We could always use some good vibes, especially in these times,” Jose pointed out.

While “Kalyeserye” was more focused on Yaya Dub (Maine Mendoza) and Alden Richards’ romance, the new talk show gives the audience a better look at the lolas’ dynamics inside their house.

But, it’s not all chatting and goofing around, Paolo said. Tinidora, Nidora and Tidora also promise to impart wisdom.

“Being lolas gives us some authority to give advice. And we Filipinos are close to our grandmothers,” said Paolo. “They do enjoy us without the costumes but, as the lolas, we become larger than life.”