NEW YORK—My first day of rehearsals is now officially over, while my daughter Nicole’s second week at work has begun. I still think it’s funny that we’re both in rehearsals for our respective shows at the same time.

Thanks to the invitation of director Bobby Garcia, I was able to sneak a peek at the “Matilda” rehearsals before leaving for an extended period of time.

I watched the kids learn choreography, the adults slay a group number, and a few of the principals be so funny that I am crying from laughing so much.

The choreography is quite challenging, thanks to Cecile Martinez (who’s ably assisted by Jim Ferrer), which means there’s a lot of repetition that takes place.

There are around three and a half weeks to go before they step in front of an audience, which means that crunch time will be crazy for them all.

However, Bobby set a system in place to help the children get up to speed: adult counterparts. There are cast members of the show who are assigned to two kids playing one role (for example, ensemble member Mica Fajardo takes care of the two girls playing Alice, and Nelsito Gomez handles the two boys doing Bruce), which helps Bobby and Cecile teach them their parts.

Most impressive though is the tone that has been set and established by the adults. The grownups are armed with buckets of patience, and speak to the kids without shouting at them.

The kids are encouraged to support one another and not be overly competitive. The parents are also asked to treat each child as if he or she is her own.

I can’t wait to see the finished production with sets and costumes, hearing a full orchestra playing in the pit, and with everyone onstage telling the story of this incredible little girl, her darling teacher and the awful headmistress.

We hit the ground running on our first day!

Following the morning’s pleasantries of meeting the entire company, including producers, theater managers, company management and production staff, it was time to start singing. 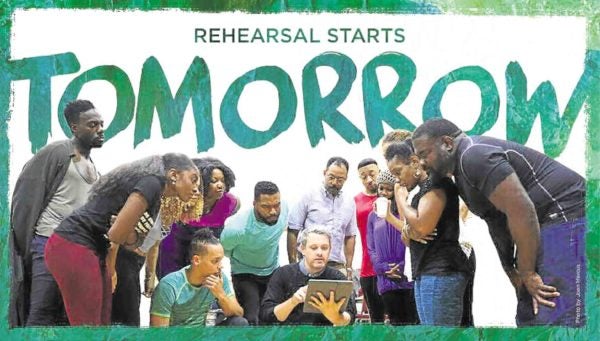 “Once on This Island” rehearsals

The cast of “Once on This Island” had done a lab a couple of weeks ago, so they had a lot of the music still in their bodies, which meant they had a bit of a head start.

I was coming in cold, but as I had written before, material was sent way in advance so I could start learning the show.

Over the last month, I was learning my parts in isolation, and today was the first time I heard things in context.

AnnMarie Milazzo, along with Chris Fenwick and Alvin Hough Jr., were busy going through each song, troubleshooting wrong notes and rejiggering syllables and specifying attack.

By the way, Hailey Kilgore as Ti Moune is such a revelation. She will be a star. And “Glee’s” Alex Newell as Asaka is beyond ridiculous.

Michael Arden, our director, began the day with a moment of silence for those in the world who are suffering, either from a natural disaster or a mass shooting.

This piece, which shows how much more powerful love is over death, couldn’t be more timely. We all need to remember to treat one another with kindness and respect.

And that’s why we tell the story. Love trumps death, always.

“Matilda: The Musical” opens on Nov. 10 at the Meralco Theater, while “Once on This Island” begins performances on Nov. 9 at the Circle in the Square Theater.