Julia Barretto calls Joshua ‘mine,’ Joshua Garcia says Julia is his ‘everything’ 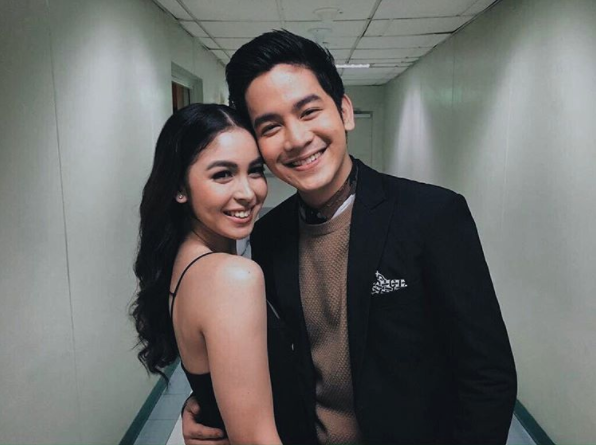 Julia Barretto and Joshua Garcia took the task of answering fans’ questions addressed to their characters in their latest movie “Love You to the Stars and Back”.

While some asked about movie-related questions, others veered towards the real life JoshLia.

The movie is the pair’s second big-screen appearance together, where Barretto plays Mika, a girl with an alien obsession, and Garcia is Caloy, a boy with cancer who lives without fear.

They had similar answers to questions, such as the hardest part of shooting (the car scenes) and their favorite part of the movie (the prom scene).

Some asked if they had a kissing scene in the movie, to which Garcia replied, “Manood ka para malaman mo (Watch and you’ll find out).”

For those who already viewed the film, a scene with an almost-kiss was an excruciating experience.

“Baka hindi pa talaga dapat. Nung ending nahalikan ko siya (Maybe it wasn’t meant to be. I kissed her in the end),” he teased.

Another asked the “A Love to Last” actress the “sexiest”  traits of her love team partner.

“His being protective and a gentleman,” she said.

And Garcia’s favorite traits of hers? “Everything about her.”

Someone dared to ask, “Akin na lang Joshua, payag ka (Joshua will be mine instead. Would you allow it)?”

To which Barretto simply responded, “Mine.”

Garcia was asked to fill in the blanks, and his reply was, “Everything.”

In previous interviews, Garcia has admitted that he is courting his co-star.

When probed in “Tonight with Boy Abunda” last Aug. 2017 on what it would take her to say yes, Barretto said, “It’s just a matter of time. It will just happen, but he doesn’t really have to prove anything anymore.” JB

Julia Barretto on being ‘exclusive’ with Joshua Garcia, what she would say to a proposal

TAGS: JoshLia, Joshua Garcia, Julia Barretto, Love You To the Stars and Back