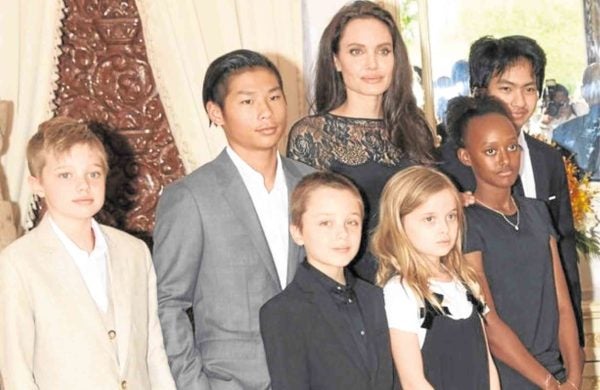 LOS ANGELES—“I speak to the kids often and I say, ‘I don’t want you to hold ill will toward anybody in your heart, nor wish for anything bad for anybody or have hate toward anybody.’”

Angelina Jolie shared that in reply to a question about forgiveness in general, but her admonition to her children couldn’t be timelier and relevant amid the rise of intolerance, belligerence, racism and white supremacy.

In this conclusion, we continue our report on our recent interview with the multi-faceted Angelina (our first since her split from Brad Pitt), as she talked about her kids, including Maddox, who is the executive producer of her latest directing effort, “First They Killed My Father,” based on Loung Ung’s best-selling memoir; her work as United Nations’ special envoy, and what she looks forward to in the next 10 years.

“First …” symbolizes some sort of coming full circle for the three—Angelina, Maddox and Loung.

“She was very supportive. So she has known Mad his whole life.” (Angelina and Loung have been friends for 16 years now.) “Mad has known of Loung’s story his whole life. I told him, ‘One day, son, you’ll be ready, and you will tell me when it’s time to go deeply into your country. But I need your help. You have to do it with me.’

“One day, he said, ‘I’m ready.’ And he was. I made him go really deeply into the research, daily work and the edit. Also because the film is from a child’s point of view, it was good to have somebody younger (like Maddox) in there to say, ‘You’re losing my attention.’”

Understanding what happened in the Cambodian genocide helps enlighten her, especially in her volunteer work as UN’s special envoy, she claimed. “This cruelty and man’s inhumanity, oppression, intolerance and hate—we (still) see it today,” she said. “So there’s a need to rise against it and show the extraordinary people who go through it.

“We need to help share their voices, listen to them and connect people. So the next time I see a little girl in the middle of a war zone, I know how to speak with her more freely and feel more informed to be able to give her the right kind of support.”

On the controversy stirred by a Vanity Fair article that claimed Angelina and her team used emotional manipulation when they were casting the Cambodian child actors, she countered, “I have explained it and you can look it up.” (She said that the children’s guardians and parents were present at all the casting sessions and that everyone knew make-believe was involved.)

“It was a mischaracterization. It didn’t happen in any way that wasn’t absolutely with the thought of what is best for the child, the family and the situation. Everybody knows Rithy (Panh, producer) and me pretty well and the way we’d handle these situations.”

Having realistically showed man’s inhumanity in her absorbing war dramas, what’s her personal take on forgiveness?

“It’s a very good question,” she replied. “This answer gets political. I believe that without any form of justice, it’s very hard to ask for complete forgiveness. I speak to the kids often and say, ‘I don’t want you to hold ill will toward anybody in your heart, nor wish for anything bad for anybody.’

“There’s right and wrong, justice, criminal behavior and cruelty, and there are things that must be stood up against. So, in order to get to a place of peace and forgiveness, you have to address the crime and make sure that the crime does not repeat itself. Cambodia is a very interesting country to look at for that. 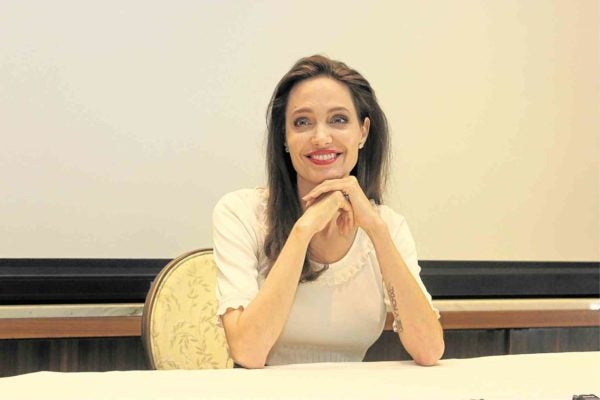 “Loung had death threats. There were people saying that these things didn’t happen, even 10 years ago, when I’d go there. There’s an argument for those brave people who would come forward in the tribunal. However small the amount of people convicted, there was a determination that there was a crime. Maybe that’s partially why we were able to finally make the film a few years after the tribunal, because the country is breathing differently.”

About reconciliation in general, she said, “I can reconcile if I feel that there’s been some form of justice done and some lessons learned. We must do that, or else we’re just staying in the cycle. In my heart, it’s important not to ever hold hate—it just destroys you. Louis (Zamperini, whose life as a prisoner of war in WWII she chronicled in ‘Unbroken’) taught me that.”

Teased about the many sides we see of her, Angelina quipped with a laugh, “Well, there are probably 12 of us (laughs). I need to rediscover some of the feelings of the old me, actually. We lose our way a bit and we get quite overwhelmed. I have had a lot happen in my life, from certain people passing, health issues to raising the children.

“It’s been a good time to absorb, develop and grow. But maybe, it’s also my kids growing up, where I’m starting to realize my own sense of play and joy have been put on hold a little bit. And maybe the kids hitting their teens is going to bring out a little more fun in mom (laughs). So maybe I’m going back. It may be time.”

In parting, she was asked where she sees herself in 10 years, and how she would have answered that same question 10 years ago. “Ten years ago, I wouldn’t have absolutely said where I am today, because I would’ve thought very differently about my family life, marriage and career. I would never have thought I was going to be a director. I would have bet on just the kids, all the travel and continuing that work.

“In 10 years, you get to that age and you just want to be healthy. So, I hope I’ll still be creative. Mad will be 26 [then]. I couldn’t stop crying as I was reading him his (birthday) card. He couldn’t stop laughing at me. In 10 years, the kids are all out of the house. So I have no idea what I’ll be doing. Chasing them around, I suppose. Hopefully, no grandkids yet (laughs).”