How Sharon got her groove back 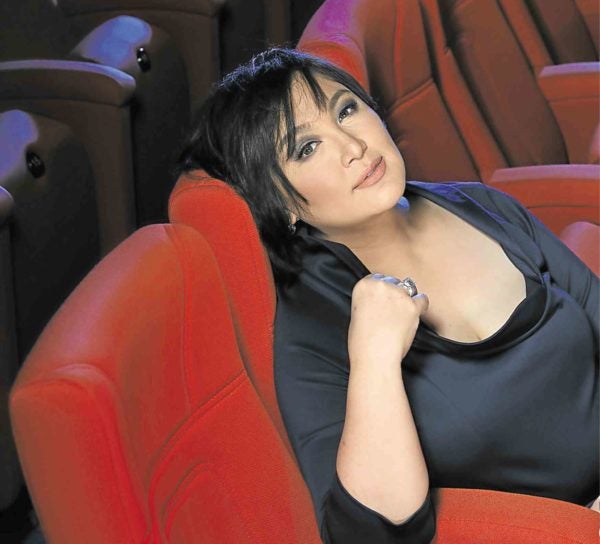 Going indie has rejuvenated her love for the movies. Quick on the heels of her first indie, Mes de Guzman’s “Ang Pamilyang Hindi Lumuluha,” Sharon Cuneta, known as the country’s Megastar, is raring to act in more films.

She will be reunited with frequent leading man Robin Padilla in her next big-screen project, which will be directed by Cathy Garcia-Molina and produced by Star Cinema.

It’s about old friends who bump into each other again. “He becomes my neighbor. Something is rekindled. It’s a beautiful story,” she volunteered.

The Robin movie, which also features teen stars Julia Barretto and Joshua Garcia, will likewise serve as a reunion with Direk Cathy who was the assistant director in two of Sharon’s movies under the helm of Olivia M. Lamasan: “Madrasta” and “Minsan Minahal Kita.”

She related that she felt “touched” by the gesture of Robin, who went out of his way to watch “Ang Pamilyang Hindi Lumuluha” and even promoted it online.

Her indie experience was a shot in the arm or, more accurately, a bolt of creative lightning.

In an exclusive interview, Sharon told the Inquirer: “I am so happy. If all goes well, I will be inspired to make another one.”

Riding high on the momentum sparked by the string of indie hits and festivals on the local scene, “Ang Pamilyang Hindi Lumuluha” will have its commercial run, nationwide beginning Sept. 6, with Star Cinema as distributor.

“The timing is just right. ‘Kita Kita’ was a hit. The Pista ng Pelikulang Pilipino did well. I am really excited,” she asserted.

In a recent Facebook post, she made a public plea to the country’s producers and directors to send her fresh material as she was reinvigorated by her recent indie foray: #SharonGotHerGrooveBack.

She has a simple requirement for future collaborators. “I want to work with directors who are quick, and good,” she pointed out.

She is well aware that pre-production requires time and patience, but, like in all things, she is more than ready to get down on her knees, storm the heavens and “pray for things to fall into place.”

That was precisely what happened to Mega and Mes.

She was originally set to do a reunion movie with erstwhile leading man (and ex-husband) Gabby Concepcion as her comeback after an eight-year absence. The string of delays eventually opened up a path for “Ang Pamilyang Hindi Lumuluha,” which was conceptualized as early as 2014.

“I lifted up the Gabby movie to the Lord na … maybe it didn’t push through because a meaty solo project was in store. It all worked out in the end,” she recounted.

She first learned about Mes, via an Inquirer article 11 years ago, when she read about his struggles to make “Ang Daan Patungong Kalimugtong,” which had made waves at the San Sebastián International Film Festival in Spain.

“But I forgot about it. Mes only reminded me that he was the same guy, after the shoot, during the gala at the Cultural Center of the Philippines! It was really meant that we would meet,” she noted.

She recalled that Mes was a breeze to work with, that it was a collaborative and cheerful set. “It was fun and he was open to suggestions. I would ask if I could deliver a line a certain way and he would allow me,” she looked back.

It was like jazz. She remarked that there was freedom to improvise, but they were always mindful of returning to the original theme.

Now, she is neck-deep in work, drumbeating her latest pet project, which is an honest-to-goodness labor of love. She didn’t just invest time and resources; she also shared a part of herself in it.

The breakdown scene was her chance to let loose, she confessed. “I vented all my angsts … lahat ng sama ng loob!”

In contrast, the rib-tickling repartee with costar Moi Bien was a breath of fresh air. “We just kept laughing. The scene at the stairs was even longer, but we had to keep it short,” she owned up.

There is word, however, that some outtakes, bloopers and other additional footage might end up in the theatrical version.

“That’s something new to look forward to,” she enthused.

Only a few people know that Sharon was a sharpshooter in her teens.

“Helen Mirren did it in ‘Red.’ Maybe Robin and I can do a spy thriller … throw in Judai (Judy Ann Santos) pa,” she quipped.