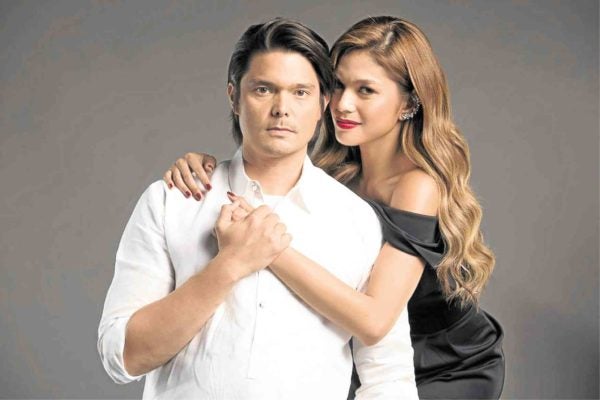 We’ve watched the first few telecasts of the new season of the action-drama series, “Alyas Robin Hood,” and can encouragingly report that its key strengths include Dingdong Dantes’ believably heroic portrayal of the title character, and some really big action scenes that occasionally “open up” the series to “filmic” excitement and scope.

Having said that, however, we should also share that other action moments are compromised by their taking too long to unspool, a number of improbable confrontations that are too easily resolved, and an awkward mix of comedy and action, “sexy” and action, etc.

The comedy is provided by a number of “sidekicks” who keep butting in with “funny” remarks, most of which aren’t really that amusing and just get in the way of the action scenes’ uptempo progression.

As for the “sexy,” some of it is compliments of the show’s leading lady, Andrea Torres, who’s an enthusiastic eyeful who isn’t shy about sharing her “assets.”

Trouble is, the way her eye-catching “moments” are edited into the show as a whole, they too get in the way of the action.

For instance, in the series’ very first telecast, she was made to make a really grand entrance—by way of an airborne appearance via parachute, coolly landing in a big swimming pool, where she proceeded to take off her jumpsuit to reveal an exceedingly wee bikini.

That was great for the oglers out there, but the “grand entrance” took so long to play out that it dampened the excitement of the (too extended) scene.

No fault of the sultry Ms Andrea, of course, but the awkward mix and mix-up of elements shows that the series has “focus” problems that should be fixed early on, before they become really offputting.

Dingdong’s lead portrayal is a real plus for the show, because it assures viewers that we’re in competent heroic hands.

So, it shouldn’t be compromised by other people’s less than efficient work—and by the temptation to score big, not just on point of exciting action, but also in “fun and games.”

All too often, the effort to make the show a “fun” viewing experience on all fronts dampens its excitement and fudges up the brisk editing that action-dramas need to have to live up to viewers’ upbeat expectations.

In another tellingly “off” action setup, a group of terrorists attacked a government building and held many people hostage, including Robin Hood’s mother and Andrea’s character.

Alas, the key scene couldn’t build up and peak in excitement as it needed to, because many minutes were frittered away with improbable detours and distractions that distended the action and fuzzed up the tension.

To really succeed, “Alyas Robin Hood” has to remind itself that it’s principally an action-drama production. Yes, other elements can stir up and sweeten the pot, but only if they’re brief and to the point, and if they work.

If the comedy falls flat and the “sexy” sags, the show’s main cause for being and being seen is fudged up and compromised. Just saying.