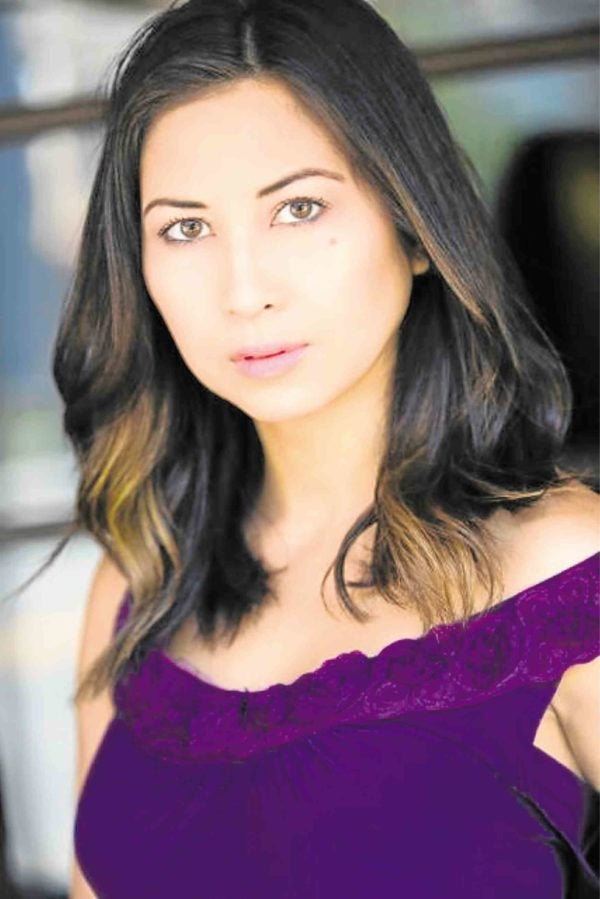 LOS ANGELES—“Be prepared … for your relatives asking you when you’re going to get a real job.” That’s part of Angela Relucio’s advice to aspiring actors in Hollywood.

The Fil-Am actress has not one but two “real jobs.” She is Nurse Risa in CBS’ medical drama, “Code Black,” which is on Season Three. And she is Navy Intelligence Officer, Lt. Camille Fung, in Weinstein Company and A+E’s action-drama series, “Six.”

Raised in the Bronx in New York, Angela originally aspired to be a dancer and first joined the Fancy Feet Dance Studio’s competition troupe. She landed a coveted spot in the Fiorello H. LaGuardia High School of Music & Art and Performing Arts, popularly known as the “Fame” high school.

After attending the Bronx High School of Science, Angela—by now more interested in acting—enrolled in the NYU Tisch School of the Arts and earned her BFA in drama.

She also trained at the Playwrights Horizons Theater School and The Lee Strasberg Theatre & Film Institute.

In 2010, she made the big move from New York to Los Angeles, where she lands roles in TV shows and feature films.

How would you describe your journey as an actor so far? Ongoing. It’s a series of peaks and valleys with goal-setting, achieving those goals, celebrating, coming down from the high, then eagerly setting sights on the next set of goals.

In between, there are muffled, whiny cries of hope for residuals, coupled with confusion, excitement and more diligent goal-setting.

It isn’t a bad journey, though.

How do you prepare for an audition? Any good luck rituals? I’ve been doing a lot of self-tapes. Preparation includes removing my dogs’ collars so they don’t make noise during my takes!

For in-person auditions, though, it always helps to breathe normally and trust that the work you put into the scene will unfold in the room.

Oh, and check the street parking signs before you park. Nothing worse than worrying about your car potentially being towed right before entering the audition room!

What is the most frustrating part of trying to land roles in Hollywood? If you’re an actor, then you know the submission and audition process in Hollywood can be one big political runaround.

There are “lists” and “offer only” situations, agency hierarchies, lack of avenues for talent and other roadblocks that put most actors out of the running.

How do you handle rejection? There’s the initial whimper, then I move on. While the audition is super important, getting the role depends on other factors, too, and you’ll never know why you weren’t chosen.

It’s best to do good work consistently, so that you’re confident you went in with your A-game, and you won’t second-guess yourself.

It’s also important to ask yourself and your team what else you could be doing to improve. Getting that kind of real feedback is essential for an actor’s growth.

Have there been times when you almost gave up? What motivated you to keep trying? Yes, of course! It’s a tough business that requires hustle. People say, only stay in acting if there’s nothing else in the world you’d rather do, because you love it so much. But I don’t believe that’s the only reason you should stay in the business.

What keeps me motivated is that I’ve already put so much sweat and effort that I owe it to myself to keep going.

Another motivating factor is my goal to share my platforms and make a change in this world.

As an actor of color, do you feel that opportunities for minorities are improving or getting worse? I feel like opportunities for actors of color are increasing, but for costar and some guest star roles. I was told by an agent or manager that everyone knows that the top two leads of a series are always white, and then their coworkers, friends and neighbors are the ethnic ones.

On the other hand, I saw nonwhite roles being cast more than ever, probably because of the political climate. So much so that my white actor friends are complaining there’s nothing for them (to which I respond by playing a sad song on my mini air violin).

Everything’s a trend, though, and not just with race. There was one season where everyone wanted Middle Easterns, then it was East Indians, then it was girls with bangs like Zooey Deschanel. Once, I remember wishing I was a redhead so I could audition a bunch, and this season, you’d have to be trans or Mexican to get a part!

What’s your stand on whitewashing—or the casting practice in which white actors are cast in nonwhite character roles—in Hollywood? Whitewashing is a great idea! Everyone knows there is a dearth of nonwhite actors in Hollywood. Sarcasm aside, it’s just plain weird.

Then, there’s the reverse, where sometimes white characters are rewritten as nonwhite.

So, my take is that it’s somewhere between one big mess of people offending by trying not to offend, and a money thing where producers do the offending by thinking only white actors have enough box-office draw.

In the end, we should ask why these creative decisions are being made, in order to see the real issues at hand.

Can you talk about your recent and current projects, including “Code Black” and “Six?” I’m happy that “Six” got a second season. Having played Lieutenant Fung in the first season allowed me to explore my authoritative side, and made me confident that I can hold my own in a room of 60 men and no women.

“Code Black” is on its third season. We’ve seen some doctors come and go from the hospital, much like they do in real life.

I feel blessed that my character, Nurse Risa, is still around! I always joke that there should be a spinoff called “Code Black Nights,” where Risa moonlights as a detective. Hey, why not?! “Baywatch” did it.

To people who are planning to pursue acting, what should they prepare for? A lot of people think it’s easy to make acting their profession, but a lot of work goes into it, and even then, it’s not a sure bet.

Be organized and disciplined because you’ll be your own one-man business. When you first start out, be prepared for that. And for your relatives asking you when you’re going to get a real job.