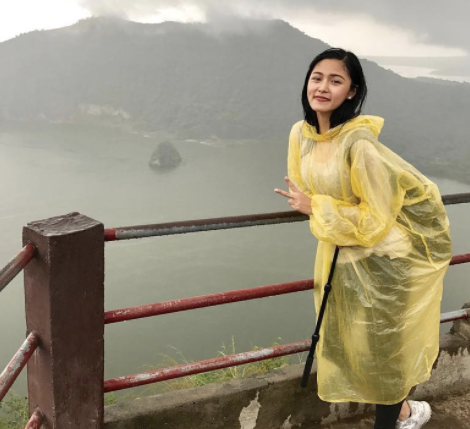 Her Instagram posts showed the actress trekking Task Volcano. “Finally got the chance to see Taal Volcano!!! sayang lang coz it was raining but the experience going up was 💯% worth it!!!”

Her posts carried the hashtag #KimAdvenCHIUres.

Stepping on hardened lava was, for her, an experience of a lifetime. Being “on Top and on the Edge of the Red Lava!!!! its kinda scary but just believe in the saying ‘inhale courage, exhale fear,'” she said.

As they say, adventures are more fun with company. The actress braved her Taal volcano crater adventure with her crew.

The rains did not stop Chiu’s crew from appreciating the beauty of Taal Volcano up close. As she said, “random and unplanned kind of roadtrip is always a best idea!!!😅👍🏻💦 its been raining the entire day pero kahit na may bagyo laban parin makita lang ang taal volcano!!!😉 had so much fun!!!! thanks mga mamas!!”