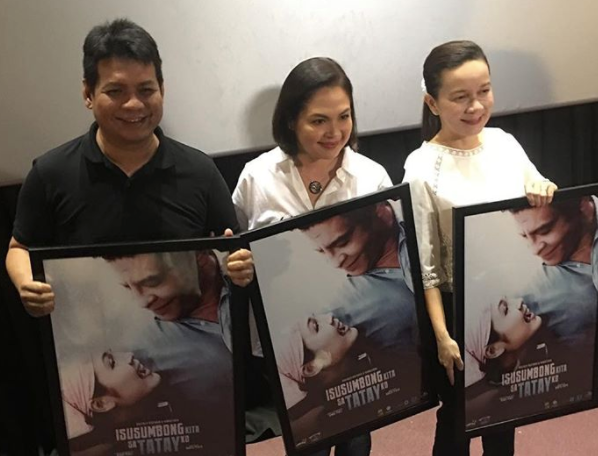 The movie was a union project for A-list drama actress actress Judy Ann Santos and “King of Philippine Movies” Fernando Poe Jr. (FPJ). In previous online pronouncements, Santos expressed excitement over the restoration and rescreening of her movie with the action king on the big screen.

Wife and “Queen of Philippine Movies” Susan Roces was present to show support for the work of her late husband.

Santos was at the peak of her career as one of the leading young stars of her time when she did the movie with the action king. Now, she sets off again to another premiere of the same movie years after.

“Isusumbong Kita sa Tatay Ko” may not be his personal project, but Kapamilya actor Coco Martin sure has a lot to thank the action king for. Martin’s top-rating prime-time action series “FPJ’s Ang Probinsyano” is the television adaptation of one of FPJ’s most iconic films. The movie was released in 1997.

Hence, his presence at any event in honor of the late actor is to be expected.

Poe’s daughter in the movie and his real-life sweetheart were captured seated beside each other.

Pressman and Santos were seen gamely posing for photos together.

In an Instagram post, the actress showed that she was accompanied by husband, TV host-actor Ryan Agoncillo.

“Isusumbong Kita sa Tatay Ko” was a family action-comedy that first premiered in 1999. It was the action king’s first and only film under Star Cinema.