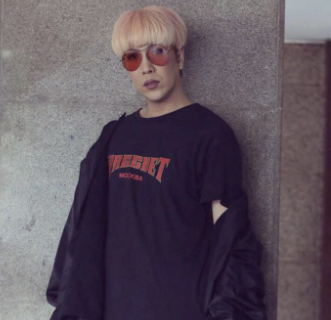 Vice Ganda made the much-awaited apology on “It’s Showtime” today following Calvento’s rage, after the comedian made a reference on the veteran journalist in an interview with a “Tawag Ng Tanghalan” segment contestant, in a previous episode of the noontime show.

“I just would like to personally apologize nga pala,” Vice Ganda started. “Kasi last time, I wasn’t able to personally say my apologies to Mr. Tony Calvento, who got offended when his name was dragged during the discussion noong nakaraang linggo (last week).”

The comedian then explained that the delays to his apology came about because of his concert engagement in South Korea.

(My apologies sir. I personally apologize. Please forgive me for the delay [of my public apology] because I was in Korea.)

Despite the delay, the comedian still heeded the demand for a personal and public apology of the offended veteran journalist. The comedian also shared that he initially called Calvento upon learning of his outrage, to give a private apology.

(Nevertheless, I was able to talk to him. I called him and I apologized personally. But still, I would like to do this, sir, please forgive me.)

The said apology was captured by the Twitter page of @showbiznestlifestyle.

Calvento immediately turned to Facebook to announce his acceptance of the comedian’s apology, with these words: “Vice’s personal apology accepted. All is well. Let’s move on, Vice.” 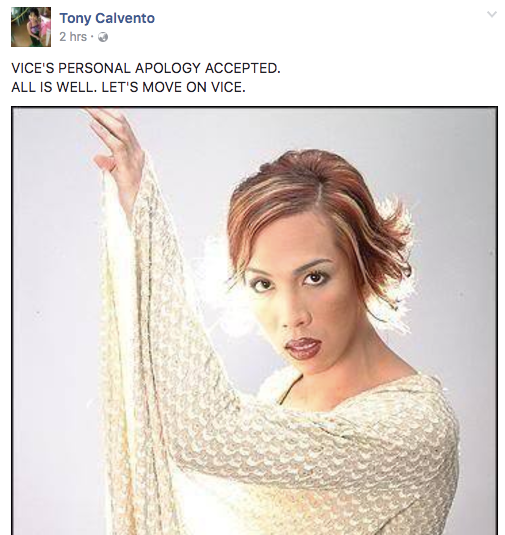 Vice Ganda has been criticized by many for the way he does his comedy, which is usually in the style of sarcasm and may tend to be insulting. Tony Calvento’s deadline for the comedian’s public apology was yesterday, August 16. JB

Tony Calvento’s deadline for Vice Ganda to give personal, public apology is today