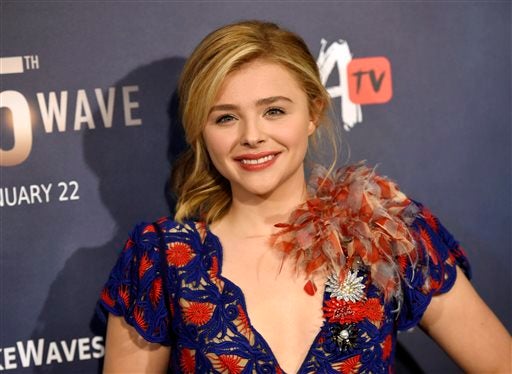 In this Jan. 14, 2016, file photo, Chloe Grace Moretz, star of “The 5th Wave,” poses at a special screening of the film in Los Angeles.  AP/INVISION FILE PHOTO

Chloë Grace Moretz is undeniably one of Hollywood’s most talented and desirable young stars.

But despite her acting prowess and considerably good looks, the 20-year-old “Kick-Ass” star admitted to also being a victim of Hollywood’s reported “sexist practices.”

Moretz revealed to Variety an instance wherein she was body-shamed by a male co-star on the set.

“This guy that was my love interest was like, ‘I’d never date you in a real life,’ and I was like, ‘What?’ Moretz said, opting not to reveal the man’s name.

The Georgia-raised actress revealed that she was 15 years old at the time, while the actor was in his early 20s.

“It was one of the only actors that ever made me cry on set,” she recalled.

Despite the harsh words from her co-star, Moretz kept it professional, but revealed it was difficult to picture him as a love interest after the incident.

“I had to pick it up and go back on set and pretend he was a love interest, and it was really hard,” she said.  “It just makes you realize that there are some really bad people out there and for some reason, he felt the need to say that to me. You have to kind of forgive and not forget really, but it was just like wow. It was jarring.”

Moretz added: “I look back on it and I was fifteen, which is really, really dark.”

Aside from baring the “fat-shaming” issue, she also shared how Hollywood has “a long way to go” in terms of treating female actors fairly.  Khristian Ibarrola /ra

Read Next
Jim Carrey shifts from being a comedian to becoming an inspirational painter
EDITORS' PICK
Notice of 2020 regular meeting of stockholders June 18, 2020
SM prepares for ‘safe malling’
Leveling up your ‘lutong bahay’ with the kitchen companion you never knew you needed
NBI, Immigration to join hunt for ‘underground’ medical clinics
2 Chinese nationals arrested in raid on another unlicensed COVID-19 hospital in Pampanga
P2.2 trillion in losses: Cost of COVID-19 impact on PH economy
MOST READ
Revillame tells Roque: ABS-CBN is in my heart despite being in rival network
NCR is ready for GCQ — Palace
LOOK: Robredo, Vico Sotto, check Community Mart ops in Pasig
Año: Quarantine passes not needed in GCQ, movement restricted to essential travel
Don't miss out on the latest news and information.