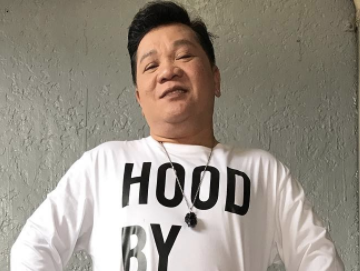 Veteran comedian Allan K came to the defense of “Eat Bulaga” co-hosts Alden Richards and Patricia Tumulak following a netizen’s accusation that the two are actually in a relationship, and furthermore, living together.

The netizen who goes by the handle @rosalindaortega36 commented on Allan K’s recent “Hello monday” Instagram post, and suggested to the comedian to just pair up Richards and Tumulak instead, because according to her, they are the “real lover[s]”. She also wished for a movie for the two, and asked Richards to just stop “using Maine.”

Furthermore, @rosalindaortega36 asked the comedian to stop lying and simply admit to the fans that besides Richards and Tumulak being the “real lovers,” the two are actually “liv[ing] in” at a condominium unit located in Taguig City. Again, the said netizen wished for Richards to stop using Maine to delight the fans while allegedly, he is kissing another woman, who is the former beauty queen.

Allak K then took a calm but on-point defense for his co-hosts. He expressed sympathy for the netizen for her “info,” then asked her to “pray for wisdom.”

Speculations about Richards and Tumulak being romantically linked have been circulating online. Together with Richard’s on-screen partner Maine Mendoza, the three are among the hosts of long-running noontime show “Eat Bulaga”.

Even amidst the intrigues thrown at the phenomenal “Kalyeserye” love team, AlDub Nation, Richards and Mendoza’s fan empire, still shows solid support for the two. JB