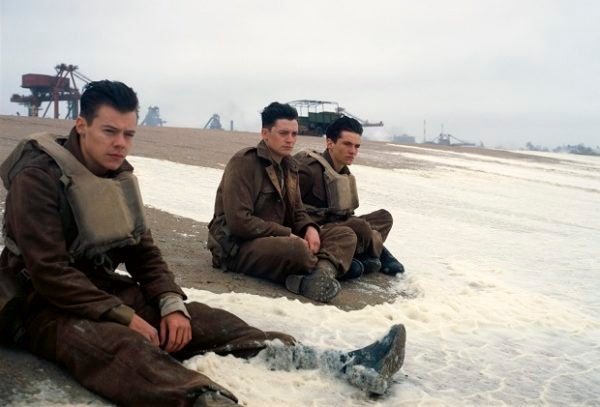 This image released by Warner Bros. Pictures shows Harry Styles, from left, Aneurin Barnard and Fionn Whitehead in a scene from “Dunkirk.” AP

Directed by Briton Christopher Nolan, critically acclaimed “Dunkirk” took in another $28.1 million, according to box office tracker Exhibitor Relations, for a total of $102.8 million since it debuted last weekend and became the first non-franchise film to top the charts this summer.

It stars singer Harry Styles in the retelling of the storied 1940 evacuation of hundreds of thousands of Allied troops from a beach in northern France under constant German bombardment.

Debuting in second place with $25.6 million in revenue was “The Emoji Movie,” an animated flick about a world inside a cell phone that is populated by emojis. A chipper one named Gene is embarrassed that he has an expressive face and sets off an adventure to become like all the others — with just one look to his or her mug.

Fifth went to “Spider-Man: Homecoming,” which pulled in $13.4 million. Overall, it has raked in more than $278 million in North America.

French auteur Luc Besson’s special-effects laden “Valerian” tanked as it fell three ranks in the top ten. In two weeks it has taken in just $30.6 million, against the $180 million it cost to make.

The EuropaCorp-financed film starring Dane DeHaan and Cara Delevingne is the most expensive independent film ever made, with some industry watchers calculating it would have to hit the $400 million mark worldwide to justify a sequel. CBB

Read Next
Vilma Santos on Nora Aunor in ‘T-Bird at Ako’: Our acting styles complement each other
LATEST STORIES
‘Mia’: Rom-com with a cause a career-boosting showcase for Coleen Garcia
No.13 lucky for Orlando Bloom
The ties that bind: Why the guys of Black Eyed Peas prefer to stay together
How Yam handles flirtatious guys
Reading: The key to true learning
MOST READ
Gretchen Barretto’s daughter Dominique graduates magna cum laude from California college
Lights inside SMX hall flicker as Duterte rants vs Ayala, Pangilinan anew
Nadine Lustre’s phone stolen in Brazil
Ginebra beats Meralco again to capture PBA Governors’ Cup title
Don't miss out on the latest news and information.