Latest John Lloyd-Sarah starrer sells the sizzle, not the steak 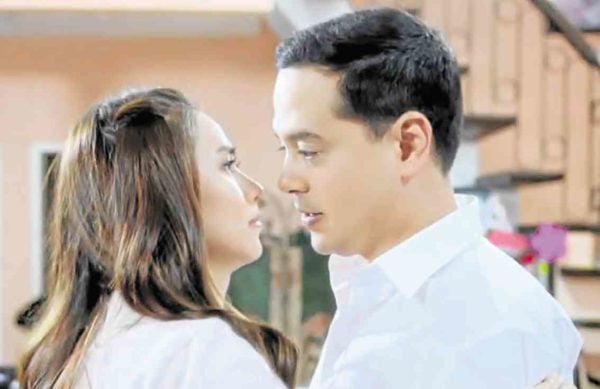 Some films hit the ground running, then find themselves quickly losing steam even before they reach the halfway mark.

But Theodore Boborol’s “Finally Found Someone,” a curious cinematic broth that seems like it’s been prepared by a coterie of sugar-and-spice-peddling cooks, goes the opposite direction.

Utilizing a loopy and implausibly staged opening sequence to get the (curved) ball rolling, the movie introduces social media-magnet Aprilyn Esguerra (Sarah Geronimo), a preschool teacher, then follows how she gets her fragile heart broken by her indecisive runaway groom, future politician Randy (Enchong Dee).

But, the guileless and clueless bride-to-be believes that even the heartless man who left her at the altar deserves a second chance. So, April swiftly agrees to team up with world-weary but “para-paraan”-savvy PR practitioner Rafael Sandoval (John Lloyd Cruz), who’s been hired by Randy’s political clan to “arrange” damage-control tricks and stunts to make Randy popular again with voters, by bringing the engaged but inexplicably estranged couple together again—all the way to the altar! As they say, sa hinaba-haba man ng prusisyon—well, you know the rest.

The situation is complicated as it is, but Raffy and April soon find themselves stuck in a bigger mess when they start falling for each other. And you know how it is in fairy tale land, so we’ll let Selena Gomez do the explaining for the star-crossed pair. Cue music: “The Heart Wants What It Wants.”

Will Raffy and April ride happily into the sunset? I’ll give you one guess.

In a shockingly “kwela” sequence that needs to be seen to be believed, the movie starts out in atrocious formulaic fashion, then by a strange turn of events, it gets “better.”

Looks like the production’s think tanks haven’t gotten the film doctor’s cautionary prescription: Too much sugar is bad for the body—and the brain—and anything consumed in excess is nakaka-umay (tiring).

As with the movie, we initially had high hopes for Christian Bables (who is appropriately cast as John Lloyd’s bumbling protégé), who served notice in “Die Beautiful” that he could go beyond cookie-cutter character roles. But his eager-beaver portrayal is too pat and predictable to truly make a mark, and his unpolished, rough-around-the-edges delivery leaves much to be desired.

Sarah and John Lloyd make their potent chemistry work for them, by proficiently delivering kilig moments that convince viewers that theirs is a tandem made in rom-com heaven.
But it’s hard not to get put off by the unnecessary irritants and distractions that the production’s movers and shakers expose them to.

When the film isn’t showing Sarah and John Lloyd plugging their respective endorsements (a cell phone company, pharmaceutical brand, eye wear, etc.—which prompted a moviegoer behind us to quip, “Parang tindahan!”), it relentlessly focuses on the cute and likable love team’s sizzle and forgets altogether that the movie is nothing without the steak. That’s too bad, because the production’s latter part manages to demonstrate just how far John Lloyd and Sarah have grown as confident and credible performers.

In fact, after the disastrous opening sequence that has Sarah looking as unhinged as the scene itself, the actress wisely “refocuses,” then eventually comes into her own. She executes her “dramedic” crowd-pleasers with compelling believability and grace.

Moreover, her “tuhog” scenes affirm that, given the right mood and direction, she can be as persuasive an actress as she is as a singer.

The fact that Sarah is lovelier than ever is another plus point. She has learned how to fill cinematic dead air with her “informed” portrayal of a woman pining for the “broken” man who professes to love her back and drives all the romantic heebie-jeebies away.

John Lloyd does even better, because he doesn’t let the film’s inane contrivances and self-serving distractions compromise his transfixing performance.

When he belatedly comes to terms with his mother’s debilitating illness and “act of betrayal,” he imbues his concealed pain and hidden fears with perceptive clarity, and hurdles the tricky thespic balancing act with flair—like the seasoned actor he is!