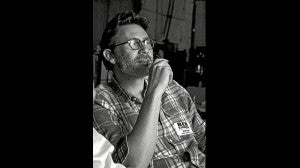 HAZANAVICIUS. His film is a love letter to old Hollywood.

LOS ANGELES — The man behind this year’s surprise Best Picture contender said he was “not prepared” for the awards buzz that his film, “The Artist,” is generating. After all, it is a silent film and…in black and white! But, what a cinematic treat this love letter to old Hollywood is — it is far more eloquent than many movies with pages and pages of dialogue.

French director Michael Hazanavicius’ sweet, funny masterpiece is set from the late 1920s to the early 1930s. “The Artist” tells the story of George Valentin (Jean Dujardin), a silent cinema idol whose career is impacted by the advent of the talkies, and his relationship with actress Peppy Miller (Berenice Bejo), who, in contrast, rises to fame with the advent of sound.

Both Jean and Berenice (who appeared in Heath Ledger’s “A Knight’s Tale” and who is Michael’s wife) are utterly charming and memorable. Jean took home the Best Actor prize in Cannes last May.

“She’s a wonderful woman and actress,” said the 44-year-old filmmaker of his muse, Berenice. “In my opinion, she’s a little bit under-employed in France. I wanted to give her the opportunity to show her personality. I wrote the script with her and Jean in mind.”

The cast includes Uggie, Valentin’s Jack Russell terrier pet who deserves a Best Supporting Actor nomination (if only animal actors were eligible!), James Cromwell as a loyal chauffeur, and John Goodman as a studio mogul.

Shot in Los Angeles, this European production was tough to get started, because it wasn’t seen as a financially sound project. Oscar and Golden Globe awards prospects were farthest from Michael’s mind.

“The only thing we were looking for was the money to finance the movie,” said the director and screenwriter known for his French parodies of James Bond films, which also starred Jean. “I said to the financier, ‘If we make a good movie, I’m sure this film can have a good showing in a festival.’ When we were looking for money, they said it wouldn’t be a hit, because nobody wants to see a silent movie. They thought that way.”

Michael saw it differently — the wordless movie (except for a brief scene) would be a universal experience. He explained, “The only thing I said was, ‘First of all, we can sell it all over the world, because it’s silent. It’s a story about Hollywood — and everybody knows Hollywood!’

Fortunately for Michael and the film, producer Thomas Langmann agreed to shoot in LA. “I really have to thank Thomas, because he understood the necessity to come to Los Angeles and make the movie here,” said the French native, whose grandparents are from Poland and Lithuania. “There’s no substitute for the Orpheum Theatre, or this old restaurant in downtown Los Angeles. Or, even the streets in the Paramount or Warner Bros. back lots. You can stylize things, but you can’t build everything. We could have shot the movie in Eastern Europe, for example. It would be cheaper, but we wouldn’t have the same feel and texture. 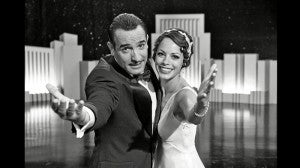 DUJARDIN AND BEJO. Topbill “The Artist.”

Scouting locations in LA was an “incredible” experience for Michael, who grew up watching film after film in cinemas in Paris. He recounted, “We went to many studios, including where Chaplin shot ‘The Gold Rush’ and ‘City Lights.’ We saw Frank Capra and Harry Cohn’s offices and the Mack Sennett Studio. When Jean and Berenice wake up in Peppy Miller’s house, they are in Mary Pickford’s bed. So, the location scouting was really amazing!”

He reveres the directors in the silent movie era. “They are the real stars,” he remarked. “For example, the way [F.W.] Murnau tells the stories is much more important to me than the actors themselves. The elegance of these movies is due to the filmmakers.”

He singled out Charlie Chaplin among the actors during that period. “He was really impressive, because he knew everything,” said the director who worked first in television and commercials. “Charlie Chaplin was a really great actor. When you see him among the other actors, you really see that he was far ahead, because he could be very interior and modern. He was a great clown, acrobat, scriptwriter, director, producer and composer.”

As for his directions to “The Artist” cast, he explained, “I asked the actors not to try to reproduce or ape the codes of 1920s acting, because that would be ridiculous. I wanted them to act very normally, the way they act now. I didn’t ask them to do specific things from the ’20s. I tried to help them, though. I shot the movie in 22 frames a second — so, that gives them a small acceleration. I wanted to give them a flavor of the 1920s, so they moved a little faster in the movie.” The standard is 24 frames per second.

Michael did ask Jean and Berenice to learn something for the movie. “One of the very specific things I asked them was the tap dancing number. That was very hard for them, because they didn’t tap dance at all! I thanked them, because they took lessons. They studied for five or six months.”

Asked if he actually shot in black and white or color and made the change in post-production, Michael answered, “We shot with a color stock, but knowing that it would be a black and white movie, we did a lot of tests. We always said black and white, but my obsession was the gray. So, I was always talking about the grays with the DP (Guillaume Schiffman).

I said, ‘It’s not about black and white. I want a very sensual image that comes with gray.’ So, to add to this sensibility, the color stock was the best. In post (-production), we went to black and white.”

“We had to take care every time,” he stressed. “We had to think in a black and white way. For example, in color, you see that blue sweater and the background color. But, in black white, you won’t see the difference between the sweater and the background. The challenge for me was that everything tells a story. When the characters are at their peak, they are very black and white. When they fall, there are more grays.”

Expect a very black and white period for “The Artist” cast and behind-the-camera talents in this awards season. So far, the little silent film that could has already claimed Best Picture honors from critics groups in New York and Washington DC.