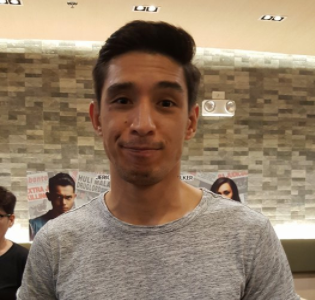 Mixed martial artist-turned-actor Ali Khatibi is open to working with his wife Cristine Reyes, and is game to do an all out love scene with her.

Khatibi is a known fighter and has made a name for himself in various combat sports competitions. But now, he is slowly venturing into the limelight via his first movie, Viva Film’s action flick “Double Barrel: Sige Iputok Mo!”

The movie is pegged as a must-watch not only because of its action-packed scenes, but also because of the talked-about steamy love scene of singer-actor AJ Muhlach and FHM babe Phoebe Walker.

Khatibi was then asked by entertainment journalists if he was willing to do such a scene. Contrary to what some may think, he is not given restrictions by Reyes on roles he can take. But he seeks his wife’s advice as he is still fairly new in the industry.

Should he be asked to do a love scene, he said he would have no qualms about doing it especially if it would be with his sexy wife.

(Of course I’d love to work with my wife. [As for] love scenes, we could give it all, [after all] we’re husband and wife. Even if there’s just a bottle cap or plate [to cover us], that should be fine.)

He also admits to have watched some of his wife’s movies in the past. He said he also does not give any restrictions on Reyes.

(I do not limit her on anything. All I say to Cristine is, when she’s given roles, it should be something that her daughter can also be proud of when she’s grown up.)