One thing is certain: Culture has not been lacking in takes on Spider-Man for the past 15 years. First there was Tobey Maguire, who under the direction of Sam Raimi for three films ushered in the modern superhero era, and then there was Andrew Garfield whose two films with Marc Webb were immediately forgettable. And now, like all obedient franchises, they’re trying to start all over again, this time with the much more age-appropriate Tom Holland in “Spider-Man: Homecoming .”

And you know what? Superhero cynicism aside, “Spider-Man: Homecoming” is really fun. Director Jon Watts, whose only previous feature film credit is the indie thriller “Cop Car,” has confidently put his stamp on the friendly neighborhood web-slinger by making one bold move: actually casting teenagers to play teenagers.

Yes, after two films with late 20-somethings donning the Spidey suit and getting bitten by that pesky spider, Spider-Man finally gets to be a kid (and we get to skip over the whole origin/ Uncle Ben story). Instead, Watts’ film, which is upsettingly credited to six screenwriters, picks up with Peter Parker (Holland) right before, during and after the events of “Captain America: Civil War,” which introduced Holland’s Spider-Man in that epic airport Avengers battle.

Instead of a “last week in Marvel” segment to catch up, we’re given a refresher via Peter’s perspective. He’s just an excited kid who filmed the whole adventure and ever since has been thirsting for more Avengers action. He tries, endearingly, to prove his mettle on his own as he waits idly in Queens for a call from Tony Stark — giving directions to the elderly, retrieving stolen bikes and doing flips on command. 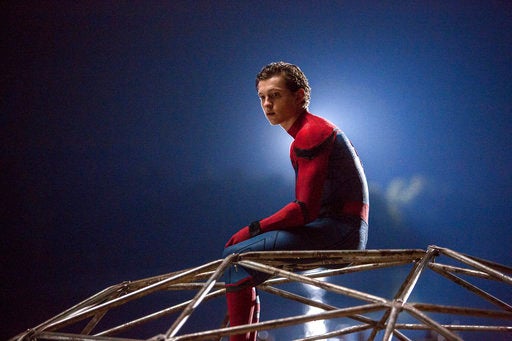 What he doesn’t know is that for eight years, there has been a supervillain emerging in his town in the form of a wronged construction worker, Adrian (Michael Keaton), who decided to break bad after losing a job to a government crew that clears post-superhero fight disaster areas. Peter, with his true-blue heart and naiveté and eagerness to prove himself, of course takes on more than he can handle, while also trying to navigate high school, homework, crushes and the awkwardness of just being a teenager. Time passes easily and just when you might worry that you don’t actually care about any of the characters, the story throws a great curveball that carries interest to the end.

The film is overflowing with stellar talent, even in the smallest of roles and not counting the Marvel loaners in Robert Downey Jr. (who oozes charisma and charm even when phoning it in for a handful of scenes) and Jon Favreau. In the high school alone, there’s the too-cool Michelle (Zendaya), the crush Liz (Laura Harrier) and the adorable breakout best friend Ned (Jacob Batalon). Hannibal Buress and Martin Starr are there, too, to add reliable laughs. Adrian’s bad-guy crew includes Logan Marshall-Green and Michael Cernus. Even Spider-Man’s suit has an Oscar winner behind its voice (Jennifer Connelly).

Then of course there is Holland, a terrific actor since “The Impossible,” who is the perfect amount of empathetic, excitable and clueless to make Peter Parker work now and for years to come. For the most part, “Homecoming” is a joy. It’s light-hearted, smart, a little meta and the first Marvel film to really consider what it might be like for kids living in a world where superheroes are real.

My only quibble with “Spider-Man: Homecoming” is that for all of its charming and infectious realism about race, high school life and class issues, it has a bit of a woman problem. Simply: every significant and semi-significant female character looks like a model. It wouldn’t be an issue were the film not so spot-on with casting such a realistic variety of men and teenage boys, or if it were less concerned with hammering down on the “Aunt May is hot” bit that goes a little too far, but when taken together you start to wonder if maybe things would have been different if just one of the six screenwriters was a woman.

But just as Peter has some growing up to do, so does this young franchise.