Drag has its exhilarating kinks 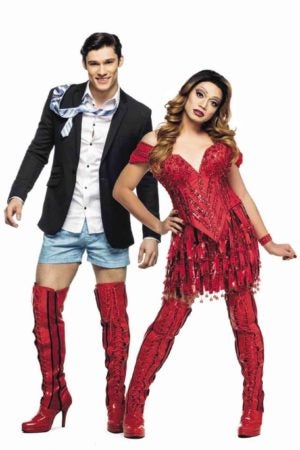 Walking in stilettos for half a day may look incredibly sexy and could feel empowering but, much like the truth, it hurts.

Imagine being able to dance in them. Now that would be excruciating. However, in Atlantis Theatrical Entertainment Group’s version of the award-winning musical, Nyoy Volante, who plays Lola, manages not only to strut his stuff in a pair of red-hot kinky boots, but portrays the complex character with the oomph that even RuPaul would be proud of.

Volante wows the audience with his spot-on humor and impressive vocal range. Even skeptical viewers are surprised by the production’s stellar representation of the drag world.

“Kinky Boots” centers on two major characters—Lola, a proud drag queen who is one boot away from snapping her ankles off due to ill-supported arches and heels.

Then, there’s Charlie Price, a man who inherits a shoe factory that’s about to go bankrupt.

Charlie sees a window of opportunity when he meets Lola, since no one has ever made “transvestite boots” that could support a man’s weight.

Lola and Charlie’s friendship blooms, and so does their respect for each other.

What’s more surprising is the audience’s growth, as well. The show showcases musical and acting talent, and preaches the need for tolerance for the LGBT community.

Charlie, played by newcomer Laurence Mossman, relates to the audience the most in terms of acceptance of the queer glamour. He starts off as any millennial small-town man would.

Seduced by the lure of wealth and opportunity, he wants a taste of the big city’s glitz and glam, away from the humdrum life of working in a factory.

Little does he know that the factory he left behind would be his ticket to success.

With Lola’s help, he manages to turn the status of the ramshackle factory around and figures out a way to get it going again.

Mossman, a Piwi (Pinoy-Kiwi), told us what it was about Charlie that he found fascinating.

“It’s nice to create a character that everyone can relate to,” he said. “I don’t have to dance as much as Nyoy, but it’s difficult nonetheless.”

For his part, Volante likes the musical’s empowering message: “As much as I appreciate people telling me that the show is good, it brings me greater joy to see the message of acceptance being passed around,” he said.

Training for the show started only a month before it began its run, but the company’s hard work seems to have paid off. The actors gave off so much energy it was like watching a fireworks display.

The award-winning musical doesn’t disappoint. It’s an eye-opener for people who have yet to accept that lines can go either way—they can be straight or crooked—and that’s all right. “Kinky Boots” will run until July 23, at the Carlos P. Romulo Auditorium, RCBC Plaza.—CONTRIBUTED