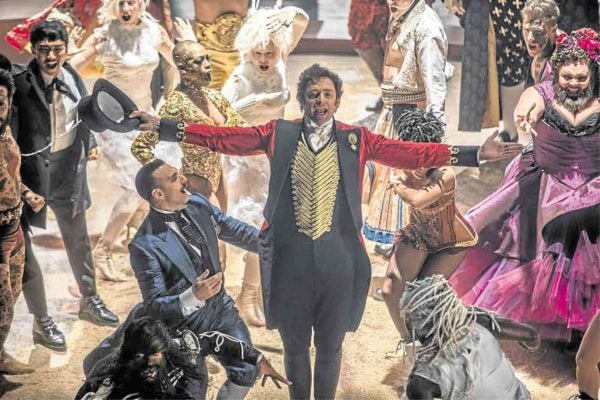 LOS ANGELES—Surrounded by The Bearded Woman, a pair of Siamese Twins, a three-legged man and other “oddities,” Hugh Jackman, costumed as P.T. Barnum, sang “Come Alive” again and again, take after take in a Brooklyn soundstage.

Yet, we never got tired of listening to the rousing tune. It’s one of those songs that you instantly like. It was an apt ditty for Hugh to be singing because after years of trying to bring his dream project to the screen, “The Greatest Showman” was finally coming to cinematic life at the Steiner Studios in New York.

It was gray and snowing outside, but inside the cavernous soundstage, Hugh and the cast were warm and ebullient, and costumed in bright colors befitting the circus milieu of Barnum’s era. The musical is inspired by the life of Barnum, the legendary show business impresario.

You heard it here first: We think Keala Settle, who plays The Bearded Woman, will be a star when the film is released on Christmas Day this year. We watched footage of Keala singing “This Is Me,” which we predict will be one of the musical’s powerful showstoppers.

“Come Alive” and “This Is Me” and the film’s other songs come from “La La Land’s” Benj Pasek and Justin Paul, who might have another busy awards season as a result of this musical. While the movie is set in the mid-1800s, the songs are intentionally contemporary. The duo was hired way before they became celebrated for “La La Land” and Broadway’s “Dear Evan Hansen.”

On his break, Hugh Jackman, still in costume (minus Barnum’s red jacket) and sporting sideburns, sat down for an interview.

“A lot of people think, ‘Oh, this is a movie about the circus,’ but it’s not,” he clarified. “It’s about a man who believed in the power of imagination. This might sound grand, but I really think Barnum’s time was the beginning of modern America. The idea of a meritocracy that the world he was born into was quite dour, Calvinistic and a little boring.

“Barnum believed in and was driven by making people happy, and that you weren’t limited by your class. He also had another quote, ‘Life is what you choose to make it.’ He believed that what makes you different makes you special and is the thing to be proud of and not to be ashamed of.” 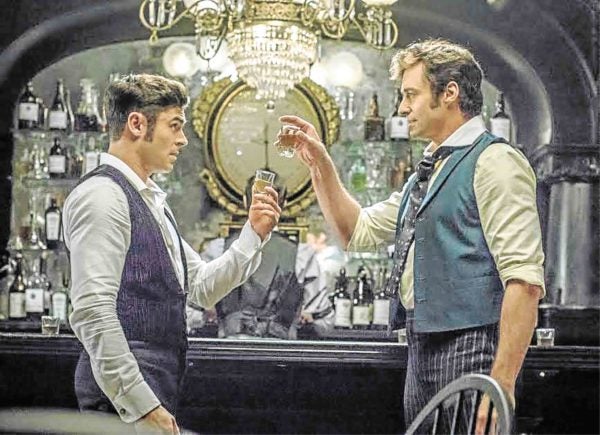 The showman, as the founder of the “Barnum & Bailey” circus, spotlighted those “freaks,” including General Tom Thumb, a dwarf who became popular in these traveling shows.

“In the 1850s, it (being a human oddity) was not only something to be ashamed of,” Hugh explained. “Many were locked up in the basement. They were believed to be cursed and were God’s mistakes. Barnum said no, I’m going to put you out in the spotlight. Some people criticized him for that. But Tom Thumb was the most famous person in America at the time—beloved, not just gawked or snickered at.

“It’s funny, but I was reflecting today that it’s not dissimilar to the world of X-Men. That idea of what makes you different isn’t something to be ashamed of. Yes, you can be discriminated for that, but it can [also] be what makes life special and fantastic.”

Who is your favorite “oddity” in the film? I can get in so much trouble, but if I don’t say Letty, The Bearded Woman (Keala), she’ll kill me (laughs). She won’t tell you this story, so I will. It’s one of the great show biz stories.

As we were developing this for seven years, we did four workshops. Keala and other Broadway actors would loyally, regularly come in, give their hearts out and so much more to those workshops. From the very beginning, everyone has that knowledge that whatever he does in that room, a movie star is going to take the role.

Keala has this song, ‘This Is Me.’ She is phenomenal in this song, so one day, Michael had a talk with her and said, “I want you to just go for broke.” All the heads of the studio were there. It was the final presentation.

Keala walks to the center of the room. She sings, tears streaming down her face. She’s just standing there with all this power. I’ve never seen anything like it. At the end, there’s not a dry eye in the house. Everybody’s crying.

Jim Gianopulos, then head of Fox, stands up, runs over and hugs her. He goes, “You just booked yourself your first major motion picture.” Now, I’m not going to tell you the names, but let me just say there were big names circling that part.

I’m loving the songs by Benj Pasek and Justin Paul that I heard you and the cast perform on the set. Can I boast? We were the first to find them. Their talent is undeniable. They had been nominated for a Tony for “The Christmas Story,” but in Hollywood, they were unknown. When we went out to find songs, we went to the biggest singer-composers you could think of—Pharrell Williams, Bruno Mars and everyone.

People were sending in songs. We started with three songs (by Benj and Justin) that we all loved. Michael (Gracey) was pitching them. “A Million Dreams” was one of their songs. Within the next three years, they had written every song (for the movie).

Their talent was obvious even though they didn’t have the calling card at the time. Since then, they’ve been nominated for (and won) two Oscars. They don’t talk to me anymore (laughs).

Did you watch Cecil B. DeMille’s “The Greatest Show on Earth” in preparation for your role? You saw a little bit today, but from the moment Michael shared his vision—and I truly think he’s a visionary—it’s very different from anything I’d ever seen. I think it’s going to surprise people.

It’s in the same way with what Baz (Luhrmann) did with “Moulin Rouge.” Michael is doing with this—from the costumes down to how he handles the story.

We’re telling the story as if P.T. Barnum were directing it.

On the set of “Les Miserables,” you sang live with a piano a few feet away. Can you talk about singing to recorded tracks in this film? I’m more comfortable singing live, but I’ve spent hours in the recording studio. We even built a recording studio during our 10-week rehearsal process so that if, at any point, anyone felt comfortable to sing, we’d just go up and record.

In some ways, “Les Miz” was frightening in that you’d wake up in the morning and look at the pillow and go wow, I’m going to put my head down there tonight and I’ll never sing that song again, so I’d better be on it today. There is some security in having recorded the songs, but you have to still sell those words and thoughts.

When did you feel like an oddity or outsider? When my parents split up and my mom left, I remember feeling very embarrassed. I didn’t know anyone at the time who had experienced that. I felt that people were looking at me like, oh, that’s the kid whose parents split.

What was the moment, early in your life, when you were onstage and you realized you have captured the audience’s attention? When I was doing “Camelot” onstage at school, I remember feeling very natural, although halfway through—because the crown they put on my head was too big—it slipped down and covered my entire face. For a second, I was like, oh, this is a disaster. Then, I heard uproarious laughter. I was like, “This is good (laughs).”

That’s when I fell in love with performing—and I’ve been doing it ever since. I never thought I’d do it as a job. I know that for a lot of actors, being onstage is nerve-wracking.