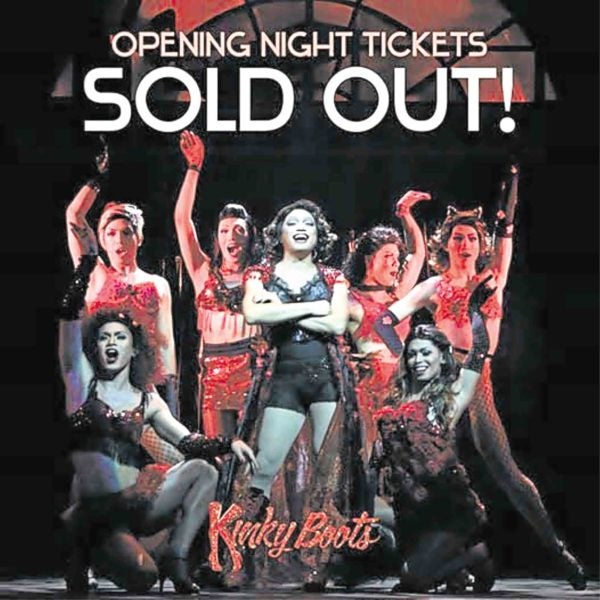 Nyoy Volante (center) with the Angels in “Kinky Boots”

It’s official: Nyoy Volante can do anything. His numerous turns in lead and featured roles over the years—Drew Boley in “Rock of Ages,” Frankie Valli in “Jersey Boys” and Donkey in “Shrek”—have helped to establish Nyoy as an in-demand, consistent and always incredible leading man.

However, his new role in Atlantis Productions’ “Kinky Boots” has propelled him to heights he probably never knew he could reach. All because of a fabulous pair of high-heeled boots.

“Kinky Boots” opened last June 30 at the Carlos P. Romulo Auditorium, RCBC Plaza, greeted by torrential rains and the hell known as “Payday Friday.” Taking both into serious consideration, I headed out to opening night early. I would be director Bobby Garcia’s date, and I dare not arrive late.

I first saw the Tony-winning musical (with music and lyrics by Cyndi Lauper and book by Harvey Fierstein, based on the 2005 film of the same name) on Broadway, starring Stark Sands as Charlie Price and Kyle Taylor Parker as Lola (Tony winner Billy Porter was on leave).

It was a thrilling night at the theater, what with the fabulous Angels parading in colorful costumes, Annaleigh Ashford leaving me in stitches, and the production’s entire company performing with so much heart.

When the Manila production was announced, I knew that I would be in for an incredible time—and it did not disappoint. The artists assembled onstage were some of the best and brightest our theater scene has to offer.

Playing Charlie in Manila is Laurence Mossman, who made his Atlantis theater debut in “Fun Home” in the multiple roles of Roy, Pete, Mark and Bobby Jeremy.

In that outing, he proved himself quite the versatile actor with this huge tenor voice. However, in “Kinky Boots,” he gets to show more than just that. His honesty, sincerity and vulnerability make his Charlie not just charming and likable, but sympathetic. It also doesn’t hurt that he’s easy on the eyes.

Yanah Laurel as Lauren, the young lass who’s hopelessly crushing on Charlie, is on point with her acting chops, vocal ability and sense of humor. She is quirky, but it never overpowers the storytelling.

The Angels (Gerhard Krysstopher, Mark Pineda, Ritz Beltran, Jorge Jahnke, Michael Jahnke and Jazztin Cacayan) are a force of nature—and they are by themselves worth the price of admission. From the moment they sashay onto the stage garbed in glitter and glamour, you cannot take your eyes off of them (In particular, Ritz as the “ring girl” in the second act is a sight to behold).

Truly, the entire cast is beyond excellent, thanks to the clear direction by Bobby Garcia, choreography by Cecile Martinez, and vocal direction by Manman Angsico. The orchestra led by Molinder Cadiz is fantastic.

Which brings us back to Nyoy Volante.

It is tempting to reduce a drag queen to merely pageantry and spectacle, both of which Nyoy possesses in spades as Lola. However, beyond the high heels, fabulous costumes and make-up lies the heart of a man brave enough to shout to the world who he really is, something that not many of us are able to do.

Nyoy gives his Lola so much heart beneath the glitz, creating a fully realized human being who makes us think deeper about the flamboyant drag queens we see on television every day, as well as the gay men and women we meet in our daily lives.

Lola is a human being that deals with prejudice and bigotry, and we see the pain endured by such a person, as well as the courage required to rise up and move forward. It is a performance that is complete in its peaks and valleys, and full in its heart.

Congratulations to Team Kinky! We are all saying yeaaaaaaah!

Read Next
Janella reveals ‘most difficult emotion to show’ in ‘Bloody’ thriller
EDITORS' PICK
High inflation: Your P1 is now worth only 87 centavos
UK’s Boris Johnson will resign, BBC reports
High-risk pregnancy: Reducing your risk is in your hands
Geek out at TOYCON 2022 powered by Smart Signature
House energy committee chair Arroyo bats for cheap electricity
Unemployment rate up to 6% in May
MOST READ
Suspect in grisly killing of missing woman in Bulacan arrested
Kim Atienza’s daughter flaunts bikini body in response to critics of her ‘revealing photos’
Japanese artist who created ‘Yu-Gi-Oh!’ found dead in the sea
UK PM quits as Conservative leader
Don't miss out on the latest news and information.