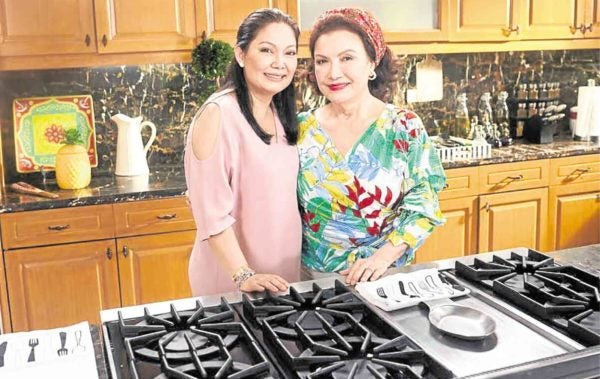 In Helen Gamboa’s hearth and heart, kinks are swiftly ironed out with the help of heirloom recipes. No problem cannot be solved over hefty servings of bringhe or kare-kare.

The kitchen is her refuge from the hustle and bustle of the twin worlds of politics and show business.

These days, everyone’s Tita Helen, who is married to Sen. Tito Sotto, often ends up parrying all sorts of low blows due to her husband’s combustible comments in the media.

As far as the Sottos are concerned, however, intrigues are best left on the doorstep.

“We’ve gotten used to it na,” she told the Inquirer. “We now know how to handle controversies.”

After her husband won as vice mayor of Quezon City in 1988, Helen had to learn how to roll with the punches. “In politics, there will always be people who want to bring you down. [But] we know each other better than they do.”

They’ve been a couple for close to five decades, after all. They eloped in 1969 and tied the knot in 1971, recalled Tito.

Helen singled out her sinigang as her husband’s favorite among her specialties. “My sinigang is made with kenchi … beef shanks,” she said.

She named a dish after Tito’s comic trio with his brother Vic Sotto and longtime pal Joey de Leon.

“I also love her Tokwa à la Tito, Vic and Joey. It’s made with kintsay (celery),” he pointed out. Her husband’s cohosts in the GMA 7 noontime show, “Eat Bulaga,” frequently request for home-cooked meals. “They always ask for her fried crabs and asado.”

Alden Richards and Maine Mendoza, of the popular AlDub duo, can’t get enough of Tita Helen’s Tinapa Rice, he exclaimed.

She is putting to good use her culinary skills in a new show, “From Helen’s Kitchen,” which airs on Cignal TV’s Colours, every Saturday, 8 p.m.

She related that she had mastered the fine art of cooking, under the tutelage of her mother Eusebia Gamboa, a true-blue cabalen.

As a kid, Helen, who’s the sixth child in a brood of nine, used to watch her mom in the kitchen, whipping up traditional Kapampangan delicacies from scratch. “Of course, I preferred to play with my friends then. But after I met Tito, I asked my mom to teach me how to cook.”

In the new show, she welcomed several celebrities to her actual kitchen in the Sotto home, to chat about food and life.

“Maricel Soriano and I swapped diet tips,” Helen recounted. “Pops Fernandez, Carmina Villaroel and Pauleen Luna-Sotto dropped by, as well. So did my children Lala, Ciara and Gian.”

Her son is a wiz in the kitchen, too, she proudly declared. “Gian also knows how to make fried crabs.”

It’s always a pleasure to meet male stars who know their way around the kitchen, she remarked. “Albert Martinez and Raymart Santiago also guested, to cook with me.”

She also made sure to dish out practical advice in the show. “I want to teach housewives how to extend their food budget. It’s possible to have a satisfying, nutritious meal, complete with soup and vegetables, at a low cost.”

If ever the cooking show would have a second season, Helen hopes to invite Alden and Maine and, of course, her niece, Megastar Sharon Cuneta.

Five years ago, a slight tampuhan (misunderstanding) with Sharon was resolved over a hearty meal.

Helen was in the kitchen the first time Sharon visited her after the rift. There was no need for tears and regrets. As soon as they got together, they got engrossed in endless kuwentuhan over a sumptuous feast. When it was time for Sharon to go home, Helen made her niece “bring home all sorts of goodies.”

She quipped: “When family and friends visit, I always give them packed meals, like my adobo, which can last for a long time and is to die for!”

Now, everything is back to normal between Helen and Sharon. “Sharon defended my husband [over the single-mom issue] and we will always stand by her, as well,” asserted Helen, who will soon costar with Marian Rivera in the GMA 7 action-dramedy series, “The Good Teacher.”

“When people ask for my secret, I tell them that everything depends on the cook,” she explained. “It’s all in the timing. You have to be patient and prepare each dish with love and care. In a way, it’s a lot like a relationship.”